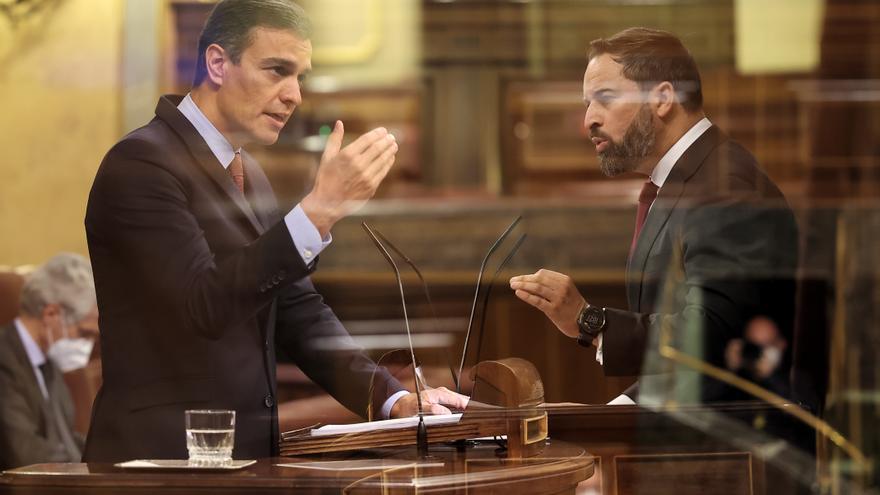 Congress is that place where the deputies always speak. With arguments and without them. With and without foundation. With reasons or not. With self-confidence or shyness. With command of oratory or with an enormous capacity to anesthetize. With the intention of conciliating or confronting. His job is precisely that: to speak. Talk a lot and always talk. And although there have been temptations to remain silent this time and not waste time in the midst of a pandemic, your honorable Members have done so again in a session that raises serious doubts about whether it was truly such and not an immodest VOX propaganda exercise in the heat of battle for the hegemony of the right to corner the PP of Casado.

They call it a motion of no confidence. It is a legitimate instrument and provided for in the Constitution. In democracy there have already been five. But the latter is the first with which in 40 years and after death, buried and exhumed, the Franco regime returned to Parliament. By the hand of VOX and with the monotonous voice of Santiago Abascal. They were accompanied by Trumpism, xenophobia, machismo, totalitarianism and a worrying degradation of democracy and parliamentarism. There was everything to portray what, in the words of the ultra-right leader, has been “the worst government in 80 years of history, and perhaps more.” Including that of the Franco dictatorship. It is clear?

This time the Spanish Parliament has acted as a loudspeaker for toxicity and all kinds of conspiracy theories in the form of an amendment to the entire Sánchez government, but sometimes the day sounded more like censorship against the Chinese government, a campaign act in favor of Trump or a motion against community Europe that Abascal sees on the way to becoming a “moderate” version of China. “Brussels will not save us. Before that, Móstoles will save us again,” said the spokesman for the reactionary right from the rostrum, alluding to the Dos de Mayo revolt against Napoléon’s troops.

No anger and no yelling, yes. The Chamber in its entirety followed with absolute respect and without interruptions – which VOX does not usually dispense to others – the four hours of anti-democratic poison that Abascal and his deputy spokesman and candidate for the Generalitat de Catalunya, Ignacio Garriga, in charge of defend Sánchez’s replacement proposal from the rostrum. By the way, his first words were to despise the inaction of the PP and Cs, his fellow blocs, the same ones whom Vox supports with their votes in various regional and municipal governments: “We may lose,” he said, “but the deputies will lose more than tomorrow they have to explain their responsibility for the continuation of this disaster. ” VOX’s ultimate claim was clear, which was not to kick Sánchez out because he lacks votes, but to reprove the other right, which is competing with them, and to stand in sole opposition to the “social-communist” government.

First notification. There would be more between the 240 minutes of diatribes about an “illegitimate” government and during which there was hardly any talk about how Spain must face the very serious health crisis – beyond the mentions of the conspiratorial origin of the virus – but there was a lot of Bolivarians, filoterrorists, separatists … To speak, they even talked about the clothing of some ministers who, for VOX, does not even pass the exam prior to attending a bottle. There is nothing. The habit does not make the monk, but those of VOX for uniforming do not stay in the ideas, but they try to arrive at the style of those who practice politics.

However, it takes a lot of self-confidence -or very bad intentions- to say solemnly from the rostrum that the Spanish are in the hands of a “criminal and dictatorial” government, born of “fraud and lies” with a plan to “destroy the institutions “. Or that “ETA has not been defeated.” Or that “crime has taken over the streets and neighborhoods of Spain with robberies, rapes and attacks of all kinds.” Or that Spain is chained “by the neck by the despotic machinery of Brussels” and “gnawed at the feet by the autonomies and separatists as failed as traitors.” Or that while Spain is discussing “the sexual rights of chickens”, the world is undergoing changes that show that “multilateralism has failed.” Or that Trump has done “well to depart from the WHO” because he has become an instrument of China’s “expansionary power”, which contributed to the “cover-up” of the pandemic. Or that it is necessary to eliminate the Autonomous Communities. Or that deputies who do not defend national sovereignty must be expelled from Parliament. Or that the Government wants to finish off the king …

A speech, that of Abascal, which mixed jihadism with immigration or citizen insecurity, to the point of stating that if one day the Catalan separatists succeed in their claims, there will be an “Islamic republic of Catalonia” without spending more than two minutes to expose their government program that, apparently, basically consists of “giving the Spanish back the voice before the end of this year” and calling elections “in freedom”. It must be that so far, we have done it in slavery.

All that and much more was heard about a Spain that only exists in the imaginary of fury, provocation and confrontation that those of Abascal represent and of which the PP has not yet decided whether or not it wants to be part. It depends on who you ask. Married maintains, for the moment, the unknown about the meaning of your vote, and despite the fact that the Prime Minister encouraged him for the umpteenth time to move away from the extreme right. “You are not the beneficiary, but the target of this attack. It is not enough to put yourself in profile and abstain,” Sánchez told him not without first warning him of the danger of “contagion”

This would be after the president replicated Abascal’s speech, announced that he had no intention of entering the rag of any provocation -as happened- and told him that tomorrow, when the floor is voted, “it will be edifying to see how closes the way to your project of shock and discord. “You hate Spain as it is. A patriot does not have half of the compatriots, like you, “Sánchez snapped to the Vox leader, after reminding him that” in addition to suffering, suffering and enduring terrorism, the PSOE definitively defeated ETA “and that these alturas would not succeed in rewriting history. A speech in which the spokesman for the extreme right mixed jihadism with immigration and citizen insecurity and in which he even stated that if one day the Catalan separatists succeed in their claims, there will be an “Islamic republic of Catalunya “.

I would still do a more in-depth reflection on the “brilliant idea” of using VOX at a time in history to change the course of the Spanish right and display the famous photo of Columbus as a great political triumph. The president was already addressing Casado: “Some are no longer with us, and the account has not yet finished. Others believe that the extreme right has some use. They do not think of building an alternative with you. They only want the extreme right thinking that you it will later be easily domesticated. They are not a danger by the force of their votes. The vast majority of Spaniards will not march behind their unhinged flags. They are a danger because they infect the right with their ideas. They drag the right with their insults and hatred. ”

Tiring and wasteful exchange of blows that had as a spectator a PP leader who disappeared in combat watching how Abascal stole a space from him for a day that he believes today belongs to him as head of the opposition and alternative government. Conclusion: Abascal tried to convince that what he intends is to rid the Spanish of a totalitarian regime to which he offers himself as a remedy, even if he lacks votes. With or without the PP, VOX will not win the motion. He barely removed from the placidity of the seat a Sánchez who boasts that today there is no alternative majority with which to replace him as President of the Government. And this on the eve of the negotiation of the budgets. So, yes, when Abascal wakes up from his day of glory and exaltation, Sánchez, the pandemic and its consequences will still be there. And he will have provided no other solution in this regard than to occupy the hemicycle, not with ideas, but with time. Two days. Too much if one takes into account the circumstances and concerns of the Spanish.