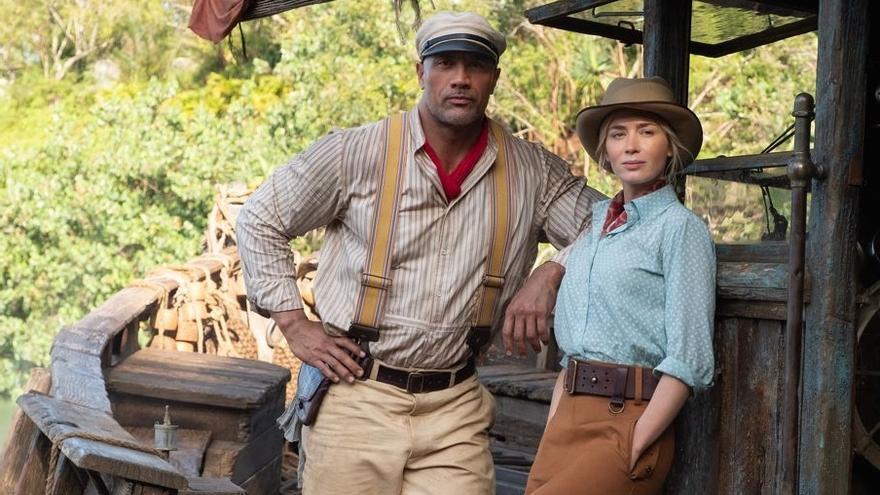 It is not something that is usually taken into account, but the first Disney production away from animation – and, therefore, called to consolidate it as a great Hollywood competitor on equal terms – was an adventure film. Of adventure, pirates and a surprising volume of violence, which was censored in the UK. In 1950, after the House of the Mouse had limited itself to employing human interpreters for mixes of animation and live action in the style of the controversial Song of the south, Byron Haskin directed The island of the treasure based on the well-known novel by Robert Louis Stevenson. It didn’t run into a huge box office success, but it did set a precedent that would be refined in immediately following years.

Thus, to truly track the industrial dynamics that now culminate in Jungle cruise, which hits theaters this Friday, we have to go a little further. In 1954, Kirk Douglas took center stage as the whaler Ned Lang in 20,000 leagues of underwater travel, conquering with his carelessly manly charisma the enormous portion of the public that this blockbuster dragged to theaters: a portion so seduced by the publicity and strong emotions that the giant squid promised that it would not be unreasonable to speak of the film as a direct predecessor of the blockbuster contemporary. And a year later, during the summer season, the Disneyland amusement park opened in Anaheim, California.

Jungle cruise It is based precisely on a Disneyland attraction that was already included in the first version of the park. In this sense, it is not possible to speak of a novel situation either, since the House of the Mouse has become accustomed with such discipline to plundering its own legacy – the abundant remakes animated classics are the best example — that taking movies out of mechanical installations is not the wildest idea, nor is it Jungle cruise exceptional for it. Before this film directed by Jaume Collet-Serra, we have had Bears in full swing, The Haunted Mansion, Tomorrowland or, of course, Pirates of the Caribbean. By far the most successful attraction in its jump to the screen.

During the months leading up to its premiere, in fact, Jungle cruise has benefited from reminiscences to Pirates of the Caribbean to create expectation. Gore Verbinski’s trilogy – prolonged by two minor installments that diagnosed the exhaustion of the formula – enjoys great affection among the public, and it is not unreasonable that Disney has studied carefully what worked so well in it when putting in foot Jungle cruise. In these terms we can value both the constant humor that bathes the dialogues of the film, as well as the articulation of the digital effects that, instead of being at the service of great action scenes, prefer to stop at the flirtation with the supernatural terror that they subscribe so much Jungle cruise as, especially, the first Pirates of the Caribbean 2003.

Where does this terror come from? Well, again, an exotic curse that the protagonists have to deal with. Jungle cruise is set in the 1930s, on the eve of World War II, and tells the adventures of scientist Lily Houghton (Emily Blunt), her brother MacGregor (Jack Whitehall) and Frank (Dwayne Johnson), the captain of the ship from which they transit the Amazon. All of them are looking for the Tree of Life, a magical place that can cure any disease, and on the journey they will have to face both Prince Joachim (Jesse Plemons) and a battalion of the undead led by Aguirre (Édgar Ramírez), the famous conqueror that within the world of Jungle cruise He ended up cursed after trying to get the same loot that the protagonists are after.

The reminiscences to Pirates of the Caribbean are therefore justified, and Jungle cruise it stands as an attempt to recapture some of its playful seduction within a very different era for Disney. Whereas Verbinski’s films were organically ascribed in a tradition that went back to the 1950s – and tried to make the live action help lend credibility to the studio once the animated Renaissance of the 90s had virtually worn out—, Jungle cruise comes in the time of remakes, of the coronavirus, of Disney + taking from each film its status as an event thanks to the hybrid model, and the House of the Mouse as a predatory entity that has absorbed Lucasfilm, Pixar and Fox to be crowned the absolute market leader. These are times when the label “summer movie” seems to resent a work that we can enjoy if we wish from the comfort of our home –Jungle cruise it is also in the Disney + catalog with Premium access—; time where there seems to be no room for innocence.

For all these reasons, the intelligence with which Jungle cruise play your cards. Why Pirates of the Caribbean it is a model, but not the only model, and Collet-Serra’s multireferential machinery directs its gaze to other types of films to which audiences have a historically proven attachment.

The argument of Jungle cruise, centered almost entirely on a ship transiting the Amazon, is powerfully reminiscent of The queen of africa 1951, with Humphrey Bogart and Katharine Hepburn as captain and passenger. Likewise, the setting at the beginning of the 20th century in combination with the omnipresent sense of humor brings us both to (obviously) the saga of Indiana Jones as a, perhaps more tightly, The Mummy by Stephen Sommers. The film that, upon its release in 1999, gave reason to believe in a comeback mainstream of naive roots adventure cinema and pulp, then aborted by its aftermath and spin-offs, the premiere of the disputed fourth installment of Indiana Jones, and the imposition with Pirates of the Caribbean of a model more excessive and dependent on a successively grotesque CGI.

Jungle cruise it has all these influences to play with but, above any coding of cinematic adventure — and in what is by far the best idea of ​​the whole — it chooses to be a full-fledged romantic comedy. One where its protagonists do not stop talking, chincharse, chaining replicas at breakneck speed. One that must rest on the chemistry of its interpreters and, surprise, it turns out that Blunt and Johnson have to give and take.

On paper, bring the screwball comedy (or “crazy comedy”) to the 21st century sounds troublesome. This subgenre had great popularity during the years after the Great Depression – the same time, curiously, in which it is set Jungle cruise-, and was characterized both by the spiritual development of the dialogues and by addressing the relationships between men and women according to an alleged empowerment of the latter. It was not so much that these comedies questioned masculinity or defended female autonomy, as that their filmmakers found the misunderstandings that friction could lead to tremendously amusing: In 1940, Howard Hawks changed the gender of the co-star for his remake of The Front Page, happening to be played by Rosalind Russell and in this way, almost by accident, New Moon brought the subgenre to its total sophistication.

With subsequent mutations, the screwball comedy He went through decades and starred in other moments of splendor, without in any case taking this changing dynamic to really uncomfortable settings for the public. All these comedies, no matter how much female rebellion they housed in opposition to the overwhelmed male, ended with a call to order; that is, with a docile reestablishment of gender roles in the face of domestic happiness that the protagonists would enjoy once they consummate their love. An ancient dynamic that before Jungle cruise had already been effectively combined with adventure cinema in After the green heart, starring in 1984 by Kathleen Turner and Michael Douglas. Hugely successful in its day – spawned a sequel a year later, The jewel of the Nile-, Robert Zemeckis’s film was based on the recent success of Indiana Jones to intensify the ingredient screwballWithout, of course, departing from the macho statements that characterized Douglas as a tough adventurer, and Turner as a writer of romance novels who fell for her manhood.

Jungle cruise dares to deal with this inheritance, and tries to handle it in the same revisionist terms that within other Disney proposals they have favored racial representation and feminist discourses that can be conveniently capitalized. Due to the specific nature of this reference, which defines women as firm and inquisitive characters, no matter how much surrender that awaits at the end of the road, the result is quite solvent: Lily Houghton’s determination to wear pants does not cease to surprise her contemporaries. , but it is only one element of the many that shape his adventurous and fundamentally comic character without falling into the stereotypical helpless woman.

Blunt’s acting ability supports this portrait, and he finds perfect companionship in the good-natured demeanor of Dwayne Johnson, so used in recent times to put a face to a peaceful masculinity, not at all threatening, that he relocates Stallone’s obscene musculature to the present. , Schwarzenegger and company.

Without completely abandoning the rancid residue of screwball —So useful, however, to consummate the retro air of the proposal—, the Blunt / Johnson relationship manages to captivate and give distinction to an ensemble, despite everything, weighed down by a good part of the evils of today’s Hollywood. Jungle cruise gives continuity to blockbuster Disney of the last decade in both an expressionless digital aesthetic and a realization as chaotic as impersonal, highly dependent on the edition, while decisions such as the incorporation of Spanish celebrities or a theme rock well-known spoil the essential immersion that is pursued.

Fortunately, for every horrendous shot or wink that returns us to the ominous reality of 2021, there is a lousy joke from Johnson or a chase between ship and submarine. There is a wisp of magic, in short, that reminds us that this is a quintessential summer movie, and that adventure always returns.