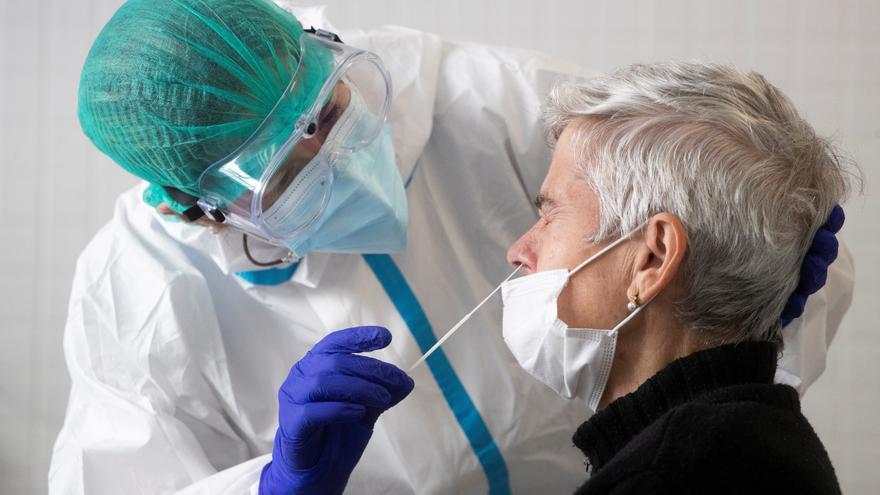 The world looks with concern to new variant of coronavirus detected in South Africa. The first scientific reports suggest that we are facing the lineage of the virus that accumulates the highest number of mutations. There is still no solid information on whether this variant is more contagious than its predecessors, although the first data points with concern to the sudden explosion of this strain in the African country.

The variant, known as technical name B.1.1.529, has been baptized with the Greek letter ‘Ómicron’, following the order agreed by the World Health Organization (WHO) expert committee on virus taxonomy. As this panel of experts has announced, this lineage is classified as “worrying”. Especially because of the possibility that increase the risk of reinfections both among those vaccinated and among people who have already passed the disease.

This is everything we know and what we don’t Of the new coronavirus variant detected in South Africa.

What makes this variant different from the others?

Genetic analysis of this variant shows about 50 mutations, of which more than 30 are in the peak protein of the coronavirus. That is, most of the changes take place in the region that provides the ‘entry key’ that the virus uses to infect human cells. It is also the area that antibodies recognize to generate a immune response (and the target used by various vaccines to build immunity against this virus). This “unusual constellation of mutations”, as defined by experts, points to B.1.1.529 as the variant of the coronavirus that accumulates the most mutations, with up to a dozen more changes compared to the most mutant lineage detected to date. Many of these mutations had already been detected in other variants. Although it is the first time that so many have been detected in a single branch of the pathogen.

For now, experts say, it is still unclear whether this metamorphosis of the virus makes it more contagious, if it generates a more serious disease or if it puts vaccines in check. Several clinical, laboratory and epidemiological studies have already been activated to solve all these unknowns. As argued from the World Health Organization (WHO), it will take “several weeks” to understand the level of transmission and the virulence of this new variant. For the moment, what worries the most is that this variant may cause reinfections both in vaccinated people and in people who have already passed the covid.

Where has it been detected?

The first cases of this variant were detected in Botswana earlier this month. Shortly after, a case was also confirmed in Hong Kong from a person who had recently traveled to Africa. As reported by researcher Tulio de Oliveira, from the South African Epidemic Response Center, in less than two weeks this variant has gone from zero to displace the dominant variant, Delta, already star in 75% of infections detected in South Africa. 90% of the cases tracked to date, which would be equivalent to about 1,000 a day, are located in the Gauteng province, in the north of the country. This Friday, Belgium reported a case of this variant detected in a person who recently traveled to Egypt. At the moment, there is no more data on the expansion of this lineage, although it cannot be ruled out that it has already jumped to other countries and regions.

How did it originate?

The cluster of mutations in B.1.1.529 suggests that this variant could have been generated in a patient with persistent covid (or ‘long covid’). “The cumulative mutation signatures indicate that arose in a chronic infection“explains the professor of microbiology Ravi Gupta, of the University of Cambridge, in the portal ‘Science Media Center’.” It probably evolved during a chronic infection of a immunosuppressed personpossibly in an untreated patient with HIV or AIDS, “says Francois Balloux, director of the Institute of Genetics at Global University London.

Are vaccines effective against this variant?

It is still too early to answer this question. Experts point out that, for now, the large number of mutations detected in this variant could cause the virus to get evade, at least partially, the immune response generated by vaccines. This, in practice, could significantly reduce the effectiveness of these drugs. The Novavax Pharmaceutical, one of the distributors of vaccines against covid-19 in USA, has stated that it is already working on an updated formula to deal with the Omicron variant.

Despite the high number of mutations, at the moment everything points to the fact that standard diagnostic tests are capable of detecting this emerging variant. Even so, according to several experts, changes in the spicule of the virus can make it difficult to detect cases. “Mutations of the S gene they can give false negatives“, says Sharon Peacock, director of the COG-UK Genomics Consortium, in statements to the portal ‘Science Media Center. According to the expert, if this hypothesis is confirmed, all this would translate into that, beyond the cases detected to date, this The new variant could be more widespread than we think so far, at least in South Africa.