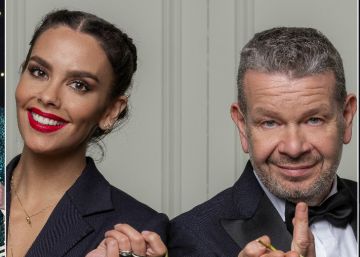 Mota's humor in La 1. Closing the year with the special program of comedian José Mota is the preferred choice of a large part of the audience. The space has always gathered more than three and a half million viewers in the last five years and has occupied a third of the screen share in its strip. This year the program, titled 31-D: a knockout(21.55), has comedians such as Ignatius Farray or Santiago Segura and there will be musical parodies of Rosalia or Aladdin. Before the Mota program, the Newscast will issue an informative summary in the form of theatrical monologue interpreted by José Sacristán. Around 23.15, the program will begin Happy 2020!, with which the public chain says goodbye to the old year and receives the new one. Again Anne Igartiburu (has been in charge of the public for 15 consecutive years) and Roberto Leal will be in charge of the Bells from the Puerta del Sol in Madrid.

2 repeats with Iron and chrome cups (23.00), with Virginia Díaz and Pablo Carbonell. The program continues after the grapes with three hours in which it recovers musical performances from the RTVE archive accompanied by ingenious labels. Cachitos It is usually one of the most commented spaces in social networks.

Cristina Pedroche and Alberto Chicote in Antena 3. The presence of the presenter (and the unknown of how her dress will be) and the cook in the broadcast of the bells is already a classic of the chain (this is her fourth consecutive year). “Every year I have more nerves because I have set a level myself and I don't want to disappoint. I feel very surrounded by the public and I remain with the affection that I receive. We worked many months in the dress to be the best, ”said Pedroche the day it was announced that he would present the bells again. Before the last minutes of the end of the year, Antena 3 bets once again for a rehash of the best moments of the year in Goodbye 2019 (22.10), presented by Anna Simon and Arturo Valls. After the grapes, the Atresmedia chain is committed to daraoke with Singing to 2020.

In Four, always love. The Mediaset chain repeats on New Year's Eve with an offer similar to Christmas Eve. First offers a special edition of First Dates (21.35) to broadcast two films after the grapes: the romantic I give them a year (00.20) and the comedy Instructions to be a latin lover (02.00). For the chimes, share the Telecinco broadcast.

The best moments of Telecinco. Paz Padilla and Pablo Chiapella present before and after the bells Take Salami! (22.00), a space that covers the best moments of the chain throughout its history and recovers milestones of programs such as Tonight we cross the Mississipi or The informal. In between, the bells will be presented by Jesús Vázquez and Padilla herself from Guadalupe (Extremadura) and Mediaset will broadcast them through all its channels.

Canned Humor in The Sixth. The night begins at the Atresmedia chain with The night in Harlem (21.30), a selection of the best monologues of the humorist Leo Harlem in Comedy club (program that will be broadcast after the grapes too). The bells and the welcome to 2020 will be carried out by Cristina Pardo and Iñaki López.