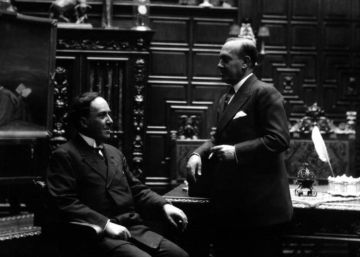 "In that Spain that froze your heart, Antonio, everyone loves you today." This is how the President of the Government, Pedro Sánchez, expresses in the three-page letter he sent to the Instituto Cervantes on the occasion of the exposition The Machado. Unicaja Foundation Collection Funds, closed on February 9 at the institution's headquarters in Madrid. The exhibition, which gathered documents such as the last letter Antonio Machado wrote a few days before he died, photographs, plays written in a row by the Machado, books ... included "a mailbox", permanently open to the public, in the one that Cervantes invited to participate also to the main parties with parliamentary representation. In addition to Sánchez's, among the 150 letters received so far, there are those of the vice president, Pablo Iglesias, of Unidos Podemos; the leaders of PP and Citizens, Pablo Casado and Inés Arrimadas, and formations such as Teruel Existe. Vox and nationalist and independence parties have declined, for the moment, this proposal, to which numerous writers and intellectuals have joined.

Sanchez he says in his letter that works like Castile Fields or Juan de Mairena, Antonio Machado, are "full of wisdom" and that "several generations" have changed "the way to understand Spain and understand life." In the text describes Antonio Machado, who died in Colliure on February 22, 1939, after crossing the Pyrenees fleeing the advance of Franco's troops, as "affable, cultured and a human being of republican principles, melancholic and lonely."

In a solemn tone, he adds that “the biography” of the minor of the Machado “has become almost a legend” and he remembers when a few months ago he visited the poet's grave to put some flowers, “for that war that expelled you from your homeland and that we all lost. " “Now, we are determined to continue building the Spain that you yearn for, illustrated, in peace, diverse, in solidarity. A Spain capable of claiming you without denigrating your brother Manuel. ” This is just the only mention in three pages, along with two of his verses, by the poet and playwright, who died on January 19, 1947 and opted for the side of the rebels in the Civil War. Sanchez ends his letter: "The blue days are, now, the days of the future", in reference to the verse that was found in a pocket of the Machado jacket already deceased: "These blue days and this childhood sun."

The letter of Married, of three paragraphs, he states that "one can be a Machadian of either of the two brothers" and that time has been approaching his verses "until we doubt, sometimes, who among you wrote that song or that song". The president of the PP goes to both to ensure that the two brothers would admire "the modern Spain we have managed to do", in which "the caines have only been banished", with a democracy "founded not on forgetting, but on the reconciliation". Married ends with a mention to the present of the country and of Europe. "The nationalisms, populisms and other ghosts of your time threaten us again", but the response of the Spaniards "will be up to par," he adds. "If we have learned anything, we cannot face our problems from two sides but as one country."

Churches, also in a brief letter, full of literary references, points out that there would be someone who expected from him “a sectarian letter with a good Machado and a bad Machado or, worse, equidistant, similar to those novels and films about the civil war with a Vaquilla-Spain killed by intolerance ”(in allusion to the film Heiferby Luis García Berlanga). However, the second vice president says that he has quoted Manuel Machado in his rallies, the contrast of character and ideas between them is left with the "Machado de la rabia y el idea, which was said by Juan de Mairena that the Fatherland is, in Spain, a popular feeling that gentlemen usually boast about. ”

Inés Arrimadas uses a more naive tone: "You have missed it but we are in the era of email, whatsapp ...", he says to talk about the current forms of communication and the letters of the Machado that were shown in the exhibition . “I dedicate myself to politics. And believe me that I would give many things to be able to sit with both of them and listen to what they think of today's Spain, ”he continues. Arrimasdas glosa the virtues of the country: its writers, filmmakers, musicians, artists, the high number of organ donors, young people working in volunteering ...

Of the letters of intellectuals, the one of the Irish Hispanicist stands out Ian Gibson, Antonio Machado's biographer, who speaks of the fact that "the two Spains" are once again ". Gibson addresses the two poets, "who shared Republican convictions." First he puts himself in the shoes of Manuel, whom the coup d'etat surprised in Burgos and could not return to Madrid, so "he spent the three years of the war painfully separated from his family." Antonio highlights his elegiac poetry, "which reaches the highest peaks of European lyric." In the end, Gibson jumps to the present and mentions Franco's exhumation of the Valley of the Fallen: "One of the happiest days of my life."