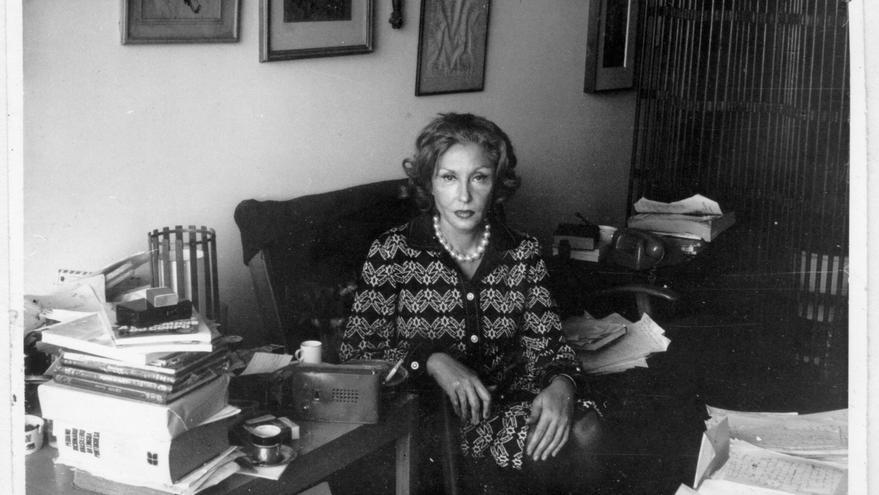 "It's an anti-canon canon," is how Clara Obligado defines her Atlas of Latin American Literature, which is hers because she signs it as editor but, in reality, it is a collective work: "A large number of writers define among all of us who has to be there", he explains in the presentation of a work illustrated by the Argentinian Agustín Comotto and published by Nórdica.

He has subtitled it as "unstable architecture" to point out that this anti-canonical atlas is not something fixed, that "it does not close a stage" and that it could well include these authors as well as others, but there was a starting premise: do not include canon authors. In this way, it is a guide to delve into Latin American literature in which, conspicuously, Julio Cortázar, Jorge Luis Borges, and Gabriel García Márquez are not. Without being there, they are: "They shine for their silence," says Obligado. And as "every text is an intertext", the first word of the book is, curiously, "Borges".

The list has been made thinking not only of who to include but also of who would write about the authors of this atlas. Therefore, this book answers the question of what Latin American authors read today, what would they recommend, what texts from the old canon have survived.

Overshadowing the authors of the boom, the great literary phenomenon of the 60s and 70s, is what has allowed other names to emerge. "It allows them to be largely forgotten like women," emphasizes Obligado, alluding to authors who should have been in the canon of the boom, such as Elena Garro or Alejandra Pizarnik. For the writer Clara Obligado, born in Argentina but living in Spain for more than forty years, the problem of the authors of the boom is that "they create a shadow zone."

Who is not missing is Roberto Bolaño. "Bolaño has to be there," emphasizes the editor. Of the Chilean, Andres Neuman writes that he "was able to add meat to Borges", there again the intertextuality that Obligado spoke of, and "politics to Wilcok, structure to Parra". Thanks to the way it is constructed, this atlas becomes "a way to discuss literature."

In addition to Neuman, the authors invited to write about other authors are numerous and among them Héctor Abad Faciolince, Liliana Colanzi, Mariana Enríquez, Leila Guerriero, Mónica Ojeda or Lina Meruane stand out, fifty texts in total. Obligado herself also writes, and she reserves for El Inca Garcilaso, who also died on April 23, 1616, like Shakespeare and Cervantes. The author tells us about this Baroque author who claimed that to describe the cruelties of Atahualpa or any other aspect of the founding culture of Peru, one had to know Quechua.

Regarding Mexican Elena Garro, "the other side of the boom", Camila Paz from Madrid describes that a few years ago, visiting a bookstore in her city, she found a book by Garro with a belt that read: "Woman of Octavio Paz, lover by Bioy Casares, inspiring García Márquez and admired by Borges". This finding, which outraged the reviewer, explains well the need for an atlas like this one.

Another opportunely prominent author is the Uruguayan Mario Levrero. He is commissioned to approach him by his compatriot Fernanda Trías, precisely one of those young authors who they refuse to be described as "the new feminine boom". "The cult writer, the fan of minor genres, the hermit, the generous reader, the mythical figure, the literary phenomenon," he points out about the fantastic Levrero, who "was many."

The inescapable Rodolfo Walsh is taken care of by another reporter, Leila Guerriero. They are both Argentines. Walsh, it is well known, was kidnapped in 1977 after the Videla coup d'état and was assassinated, it is assumed, since his body was never found. "He polished every particle of his writing to the hinges," says Guerriero, noting that his magnum opus, his monumental piece of narrative journalism Operation Massacre was published eight years before Truman Capote's In Cold Blood, "the book in which he usually be placed at kilometer zero of a new non-fiction narrative".

The Peruvian poet Blanca Varela flourishes in this map of affinities, of whom her scholar Olga Muñoz Carrasco says that her poetry "officiates a rite, is inscribed in the matter of flesh, paint, color." "She ferociously initiates us into a ceremony that consists of immersing herself in the body to the point of ridicule, in love from scarcity, in death without shortcuts," she adds.

These examples are enough to show that this is not an encyclopedia of life and work. There are no biographies although it has biographical notes. It is nourished by the same genetics as literature, and not by the academy. Far from dissecting, analyzing, and reporting, this Atlas is an intergenerational love letter that gives back what the textbooks have stolen.