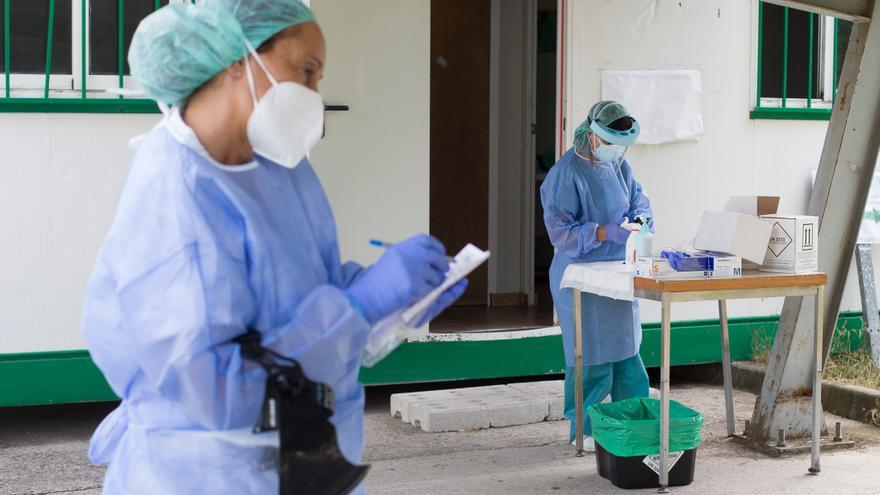 The COVID-19 pandemic evolves and along the way, technicalities that serve to understand it are added to the media vocabulary. One of the most recent is the so-called ‘positivity rate’, the percentage of people who test positive for the infection out of all who have undergone a PCR test for a specified time. The World Health Organization (WHO) recommends, in a document published in May, that this percentage stay below 5%, “as long as” surveillance “is comprehensive,” that is, a correct strategy is being followed. diagnostic. In Spain, for the week of August 11 to 17, positivity is around 7%, the highest figure of the surrounding countries (France, Portugal, Germany, Italy). There are three communities – also the two autonomous cities – that are above. Two of them are the ones that have most concerned the Ministry of Health in August and triple the WHO guidelines: Madrid, which has reached 15% positivity – the previous week was at 11.1% – and Aragon with 14 ,3%. La Rioja has 9.2%. Catalonia, which is the other region whose situation worries, remains close to 7%.

Evolution of the cases detected among the PCR tests performed weekly.

Source: Ministry of Health / * The week of August 11 to 17 has not been updated for Melilla due to inconsistency of the data

The positivity of the whole of Spain and also looking at each community one by one has grown since the beginning of the ‘new normal’. At the beginning of July, the total was around 3%, four points below the current figure and still within what is acceptable for the WHO. Ildefonso Hernández, spokesperson for the Spanish Society of Public Health and Health Administration and advisor in the Valencian Community, indicates that positivity “is important because it gives you an idea of ​​how contact tracking works.” According to Hernández, currently that meter is, together with the proportion of asymptomatic patients in the total infected, the most reliable indicator to know if the epidemic is out of control or not, if we are detecting the majority of cases or if we are again remaining on the surface. Because what a very high positivity rate tells us “is that perhaps we are not being exhaustive enough in detecting the virus. That only people with high suspicions of having it are PCR-tested and therefore many have it.”

Pedro Gullón, expert in Public Health and co-author of the book Epidemiocracy, reasons in the same sense. The ability to perform PCR has increased since May in all communities, and “in this context, a disproportionate positivity may be due to the fact that not all contacts are tested for a positive and that the tracing does not go to the bottom, but more well to highly suspicious people, with a probability pretest higher than having it. “To that, he continues,” that a month ago perhaps they were tested for silly diarrhea, which surely later was something else; now the same is done more for more clearly compatible symptoms. The protocol has not changed, but it is likely that the performance has. ”

Evolution of PCR tests carried out every week for every 100,000 inhabitants in each autonomous community

The country around us with the highest positivity

From the international comparison our country does not come off well. 7.2% in Spain is the highest positivity rate in its European environment. In mid-August, France (3.2%), Italy (1.7%), Portugal (1.3%), Germany (0.9%) and the United Kingdom (0.7%) are below 5 % recommended by the WHO, according to the numbers reported by Our World in Data. To Hernández this seems the most alarming, although he remembers: “The problem with comparing countries is that we usually lack information. It depends on whether they have been screenings massive, whether it has acted in outbreak sites … because in that way the positivity goes down even though the transmission is high. But it does give an idea. ”

Positivity of PCRs by country

Evolution of the percentage of PCR tests with a positive result out of the total tests carried out, in a selection of European countries

Source: Our World In Data

The spokesman for the Center for the Coordination of Health Alerts and Emergencies (CCAES), Fernando Simón, explained at a press conference on Thursday the implications of a relatively high positivity such as that which exists in Spain. He made it clear that “this increase” observed since July “is not favorable.” That is, although “we can qualify” the figure, “if it goes up, there is more transmission than we had.” “The evolution of the epidemic is bad,” he settled based on that and other data.

The nuances to which he was referring are various. The first is that the 5% indicated by the WHO is “a threshold, an orientation”, and as long as it does not deviate too much it is not so bad, although trends do have to be assessed. Another is that the data “cannot be assessed in isolation”, but must be analyzed, for example, the way in which the cases are being searched: “Positivity goes hand in hand with the probability of infection in the area. When in Lleida there were outbreaks among seasonal workers and tests were carried out, the positivity increased very quickly “. This means that if you know where to look – specific outbreaks, areas where a lot of transmission has been detected, correct tracing of positive contacts – it is normal for positivity to rise. Ildefonso Hernández referred to the same thing: “A high positivity may also be because there is a very well done screening in some communities, which know where to look. But overall, a high increase is bad.”

In Madrid, data on the rise

As almost always with SARS-CoV-2, the geographic distribution is very uneven. Among the three communities with positivity above the average, Aragon is in a decline phase: the peak of positivity was between July 24 and July 30, 18.4%. Madrid, with 15%, has a rising positivity curve. And Catalonia saw how it was reduced in mid-July, it grew again and this week it fell again. The one with the least positivity is Asturias, 1.3% which is also its maximum.

This difference between territories was a third nuance that Simón mentioned and supported by other experts. When studying the whole of the State, “the epidemic is having a very particular geographical distribution”: throughout the summer outbreaks have been detected that later have stabilized, while new ones have emerged in other places. That is to say, the ‘hot’ areas have been moving, something that has facilitated management: first Catalonia was concerned, then Aragon, and now with these two in a more favorable situation, Madrid does. And when the uncontrolled transmission affects “some such as Catalonia or Madrid”, with a large population, “obviously it has an important impact on the national code.” That is, if Madrid has a very high positivity, given the weight of the region in the number of citizens of the entire country, the general rate grows until it is above what the WHO asks for, as it is now. Although specialists warn that all regions must be closely monitored, because even Asturias registers more and more people who test positive in PCR.