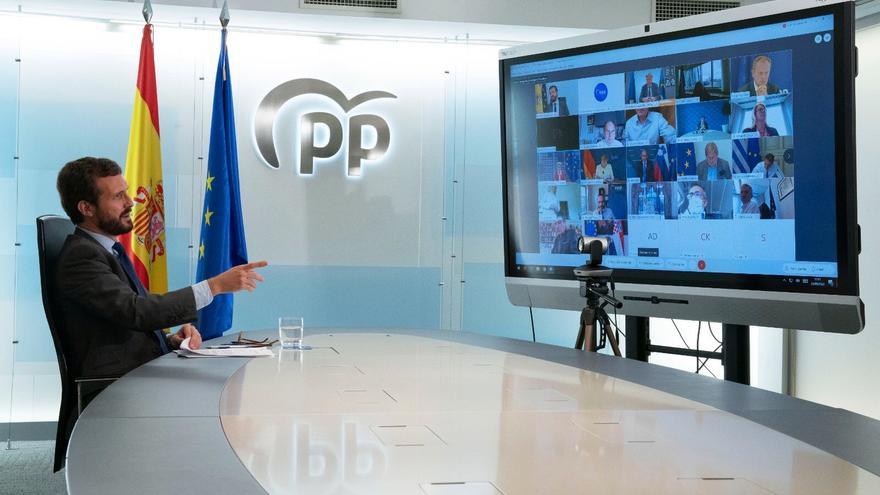 A few months ago, Pablo Casado stated that what President Ayuso did with the pandemic in Madrid would be what, in case of being able to govern, the PP would do throughout Spain. I do not know if today with the current data of Madrid as a red lantern in Europe and the chronic crisis of its coalition government would be the example for someone to follow.

Just see what is happening now in the second pandemic wave, with a government with opposing positions, between the preliminary agreement defended by Ciudadanos and the declaration, again in absentia against the isolation measures of the state of alarm declared in extremis by the government central, and a conflictive relationship with technicians and health workers that has caused a string of discrepancies and resignations causes at least the alert, but the alarm about the consequences of a conservative management of the pandemic in Spain.

Someone might wonder if with the cumulative incidence and mortality data that we have suffered, throughout the first and second waves of the pandemic, an even worse outcome would still have been possible. And although it is true that the management margins are narrower than we believe, the alternative of a management based on herd immunity to the Swedish one or an erratic strategy like the British one and not too far removed from the assumption of Trump’s denialism, it could be without a doubt much worse.

Furthermore, in the most likely hypothesis that the right wing forms a government, they would have to do so with the unavoidable support of our extreme denialist right, to which they have subordinated their opposition strategy. As in other local and regional institutions, they would have agreed on the program and today they would share the story and the denialist prejudices along with herd immunity, as is already the case in particular in the Community of Madrid.

Casado’s administration would be an explosive mix with the contradictions of Boris Johnson and halfway through the nonsense of Trump, Orbán and Bolsonaro. Both in its denial at the beginning of the health emergency, and later in relation to its rejection of the confinement measures and later with respect to the precipitation in the de-escalation and the subsequent refusal to reinforce the resources of tracking and primary care and now , in the second wave, prioritizing the economy and relegating once again the containment and mitigation strategy to the evidence of lack of control and community transmission.

Of course, it would not resemble the management of their counterparts in the EU: Merkel, Comte or Macron who have gone hand in hand with public health experts from containment to containment and control measures and who have also rejected the denialist and economistic attempts by their respective far-right oppositions, and also President Trump’s offensive against the alliances promoted by the WHO and the COVID alliance for the investigation and fair distribution of vaccines.

There are doubts about what he would have said about the origin of the virus when it all started. About its origin in biological warfare, or if they had also called it the Chinese virus like Trump. Or perhaps the European prudence was restricted to the mere reproach of the delay in the alert on the part of the Chinese authorities as one more sample of the totalitarian character of Chinese communism.

What he would surely maintain is the populist premise about the responsibility of China in the initial alert and the complicit silence of the WHO, in line with Donald Trump, in order to return to the anti-communist prejudice, the conspiracy theory and the populist rejection of the international organizations and their lukewarm policies of agreement and consensus. Anti-communism and nationalism in the face of the outbreak of the pandemic.

In relation to the first health coordination problems in Europe on PPE, tests and ICUs … it is worth considering if each one would have stayed for himself and whoever can save himself from the extreme right or would have adopted a more pragmatic stance in favor of The cooperation. In any case, the proclamation of masks for all and tests for all would be of no use, when the supply chain was interrupted and barely gave even to the precarious supply of toilets.

In the framework of the EU, what is certain is that Casado and Abascal would have decided to unilaterally close the borders, causing the consequent crisis with the Member States, particularly with Italy in the initial moment, but also in breach of the Schengen agreement and with community institutions.

What is clear is that the central thesis of the right would be the radical opposition to containment measures, and especially confinement, and the priority of maintaining economic activity over public health. In short, in favor of a strategy halfway between denialism and herd immunity.

That has been the real reason for their rejection of what they have described as the delay and incompetence of the social-communist government. First, apparently for ideological reasons linked to the defense of the feminist mobilization of 8M and then due to their genetic inability to manage in the face of the first reports of the health emergency. First by saying that the confinement was too late and then because it was too hard and finally because it took too long.

In short, a government aligned against confinement and the state of alarm as a disguised state of exception.

As a consequence, their only instruments in the matter of public health would be the CCAES together with the law of special measures, according to the PP more than enough, and on the contrary they would reject the state of alarm and they would forget again the general public health law of which they blocked its regulatory development for almost a decade.

However, the single command has a difficult fit in health matters regardless of the state of alarm. The end result would be the inability of the Casado government to bend the curve without confinement as of May 13, the date on which they voted against the extension, and a much higher balance of incidence accumulated since the beginning of the summer and the consequent continued collapse of sanitary devices.

If they had had to decide on what to do with public and private health resources, the symbol of their management would have been the empty propaganda of the public-private collaboration and the IFEMA hospital.

As for what to do with nursing homes, there is no doubt about their lack of protection and what they would have decided on who to refer, against the ethical code. On the transparency in the information of the pandemic, following the counterexample of Madrid, it is better not to give bad news.

On how the rights would face the transition from the first to the second wave, perhaps it is not necessary to rack the brains. We know what they have done to skip the de-escalation and its phases. Also of his option for the disbandment to favor the recovery of the economy at all costs. Nothing to reinforce the primary or public health or trackers. Better to dismantle it to equip hospitals like IFEMA’s. The contact tracing role of primary and public health would not exist.

The man in charge of Casado here does not have any fit in the autonomous state, which leads me to doubt that they did not resort to other exceptional measures. Especially before the criticism that the continuity of the first wave had provoked. It is clear that without a state of alarm or the obligation to appear and vote for extensions, we would have had more decrees and fewer appearances.

It would probably have chosen to again limit freedoms, the right to demonstrate or movement, in accordance with the precedent of the gag law and the reform of the penal code to silence the protests against the crisis and its policies of cuts and privatizations. But above all because of the authoritarian nature of his parliamentary supporters.

Already in the control phase, it has paradoxically demanded more state coordination and a plan B as an alternative to the state of alarm and previous tests in Barajas, without taking into account the New Normal Decree, the Early Warning plan and the IATA agreements between the countries. with similar incidence of the disease.

Now, at the time of the lack of control in Madrid, it all comes down to avoiding responsibilities towards the central government, segregating neighborhoods as if they were Bantustans and, yes, making up the figures. If the right governed, it would do the same, but deriving responsibility from the CCAA. What is not clear is to what extent they would use the cohesion law that they promoted, and how then they would guarantee coordination on the basis of the hackneyed health authority they attribute to the ministry.

We also know what they would do about the crisis and the economic stoppage that has occurred everywhere and about its dramatic consequences of unemployment and social crisis: Perhaps a first period of ERTEs, suspension of activity in the self-employed but in no case something like income minimum vital and against most likely new measures of the type of labor reform. Casado and Abascal would never miss a good crisis for a new adjustment.

But, according to the recent experience of its obstructionism in Europe, always in the hands of the so-called frugal countries, no indebtedness or non-refundable subsidies, but again a credit at a low interest, like that of Rajoy in the Bankia crisis. Of course they would not speak of a Spain intervened as they have done now.

Of course, as good supporters of herd immunity, both would have resorted to the story of vaccines as a panacea and the nationalist pulse to monopolize them against the WHO strategy of solidarity distribution with impoverished countries.

Someone will say now that I have accentuated the thick line of dystopia, because other CCAA governed by the rights have abided by the evidence in public health, and they probably have their reasons. However, I have done it with Madrid because it is the bridgehead of the opposition and the laboratory of the alternative to the management of the Casado and Abascal pandemic. A compelling reason.