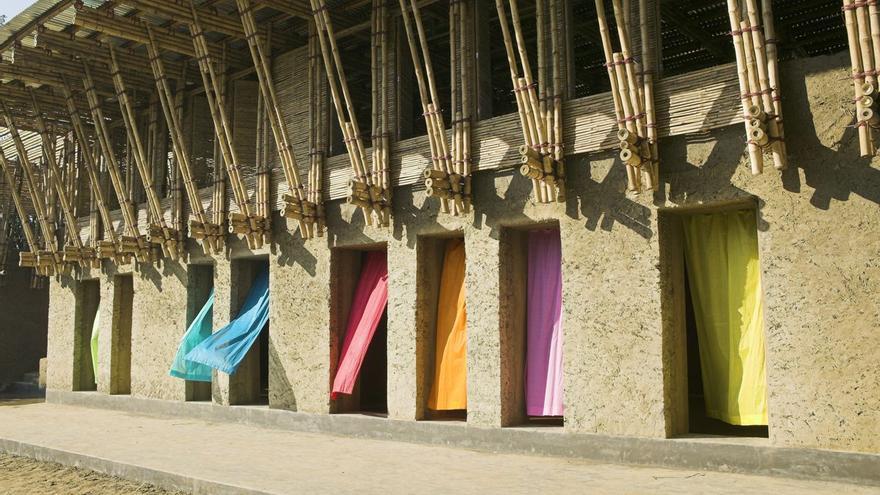 anna heringer He defends his favorite motto with conviction: “less concrete, more earth”. The slogan, which can be translated as "less cement, more earth", but also as "less cement, more planet Earth", is printed on a wall at the end of the tour of the exhibition that the ICO Museum in Madrid is dedicating these days to the architect within the framework of the Madrid Design Festival, and it is a simple and perfect summary of her work, because Heringer is both a staunch defender of that humble material that we can all get out of the ground and one of the most important supporters of sustainable architecture in its most comprehensive version.

Most of the constructions that the German company (Rosenheim, 1977) has carried out throughout three continents -Europe, Africa and Asia- are based on that land that is mentioned in the slogan and its constructive version, the mud. An inexpensive material that can be found anywhere, unlike those other, more elaborate raw materials that always have to be brought in from somewhere else, such as cement or steel. "That sometimes it is cheaper to use cement is not because of the material itself, but because of the economic system in which we live - he denounces -. And because these materials have not been added to their cost in CO2, the damage they cause to the environment or what it costs to dismantle them once they are no longer useful”. In case there was any doubt, she advocates doing it.

Anna Heringer (Laufen, 1977), with one of the garments produced by Dipdii. Gerald V. Foris

The exhibition at the ICO Museum, which bears the title Anna Heinger. essential beauty, is the first retrospective dedicated to the architect in Spain. During the presentation, Heringer focuses her speech on materials and resources. She is interested in abundant and cheap. Mud is one of them. The other is human energy. We are almost 8,000 million people on the planet thinking and moving, each one a source of renewable energy in permanent recharge. “There are many resources that nature gives for free. Because the nature of nature is abundance, not scarcity”, defends the architect. Bamboo, wood or natural textile fibers are other resources that you use regularly.

A few years ago, Heringer was the promoter, with other like-minded architects from around the world, of the Laufen Manifesto, which advocates a more human design culture. In his decalogue, which occupies one of the exhibition areas and which visitors can complete by leaving messages on post itCollaboration with local communities, respect for local building traditions, fostering an atmosphere of innovation, and the ambition to build a global strategy to shape human habitats are all mentioned. Too the commitment to beauty, "an essential human need, closely linked to dignity", pray the manifesto. Beauty is another word that appears frequently in her speech: Heringer says that, for her, "beauty is the foral expression of love", and Luis Fernandez-Galianocurator of the exhibition, adds that the beauty of his work "is not a narcotic beauty that reassures us, but a beauty that provokes us, that stimulates us and makes us see to what extent we are up to a demanding motto: that architecture is a tool to improve life".

The exhibition covers the works carried out by the architect over the last two decades. Community centers in Bangladesh, an educational complex in Ghana or an ecotourism farmhouse in the Sierra de Grazalema. In almost all of them the ocher color of the clay dominates, which in the rooms of the ICO Museum only alternates with the bright colors of the textiles that women from rural areas of Bangladesh produce for Dipdii Textilesa Heringer solidarity initiative that allows them to work in decent conditions.

In that room, marked out by hanging tapestries that were once saris and later blankets, fabrics that carry stories and family experiences, Heringer has planted, in the center, the most metaphorical piece in the exhibition. A cube covered with a gold-colored metallic surface that acts as a mirror. The architect explains that, seen from the outside, the cube reflects our consumerist spirit, shopping at the mall, the importance of our reflection. The narrow space inside is, instead, the other side of the coin: very small and with the walls covered with newspaper articles denouncing the situation of women in the textile industry in Bangladesh, forced to crowd together and lose their independence. and intimacy as they move to the cities to work in the factories that produce our five-euro t-shirts.

The textiles produced by Dipdii, Heringer's charitable initiative, in the ICO Museum exhibition.

Heringer does not leave out a single one of his messages. There is something very marketing-marketing to save the world- in the speech of this woman who, in addition to being an architect, is also an activist, communicator and entrepreneur. Some of her phrases sound like self-help, but taken to the field of construction they take on another meaning. “Everything you need is there, it is in yourself”, she says, or “when I started, I thought that the important thing was to have the best technology; Later I learned that the most important thing is to trust in your possibilities”. She defends a architecture to leave the studios and work on the ground, to find the materials in the same place where the works are carried out and to involve those who are going to live in its construction, because making them feel part of the project will help them take care of it and build a common identity.

This is how Heringer carried out what is possibly his best-known project, the METI School. A center designed to develop the confidence of the children of Rudrapur, a rural area in the north of Bangladeshi, built from earth and bamboo and in which the kids themselves were involved in the process. or the neighbor anandaloy building, a center for people with disabilities, in an area where this condition is considered a kind of curse and a sentence. Its lines are curved and light. "I wanted this building to break out of the mold, to dance. To show that diversity is something to celebrate," explains the architect. The building is the first in the area to have a ramp, and it presides over its entrance. "That is also the power of architecture: to make things visible and to put the focus on them," she defends. A power that she also used in the three bamboo lodges that she built in Chinaand with whom he wanted to denounce that in just three years, between 2011 and 2014, the Asian giant consumed more cement than the United States throughout the last century.

Mud in the Old Continent

In his European works, Heringer has followed the same philosophy. Although building with earth may sound more unusual today in this corner of the planet, "part of the Alhambra is also built in mud," he maintains. In the Peter's Cathedral in Worms, in his native country, the challenge was to make a definitive altar within the framework of a spectacular Baroque complex designed by Balthasar Neumann in the 17th century. Instead of placing a metal one brought from outside, he solved it by summoning the parishioners themselves to model with their hands, in situ, a block built with earth. The humblest of materials surrounded by the ostentatious gold of another era.

The Space for the birth and the senses of Vorarlberg (Austria). Laurenz Feinig

It has a more organic feel to it. Space for birth and the senses, a construction in Austria that evokes a womb in which mothers can bring their babies into the world in silence, surrounded by warm materials and a welcoming light, instead of the hostile and overlit atmosphere of hospitals. An environment that she achieved with the fine clay walls of the interior and the reddish-colored wooden slats covering the exterior. The construction went ahead thanks to the voluntary work of 400 women. Already within our borders, when it was proposed to design what will be a ecotourism complex in Malaga, in La Donaira, chose to bring to the modern language of the resort a layout of alleys like those of the towns of all life.

"Anna insists a lot on the collective nature of everything she does, and she's right, but I encourage us to be aware of how much individual genius and talent there is in this exhibition," says Fernández-Galiano. Also in the most practical aspects. The tour of the exhibition leads to the store, where you can buy some of Dipdii's textiles, the benefits of which will benefit the women of Bangladesh. And that comes like this to close the studied virtuous circle proposed by the architect.