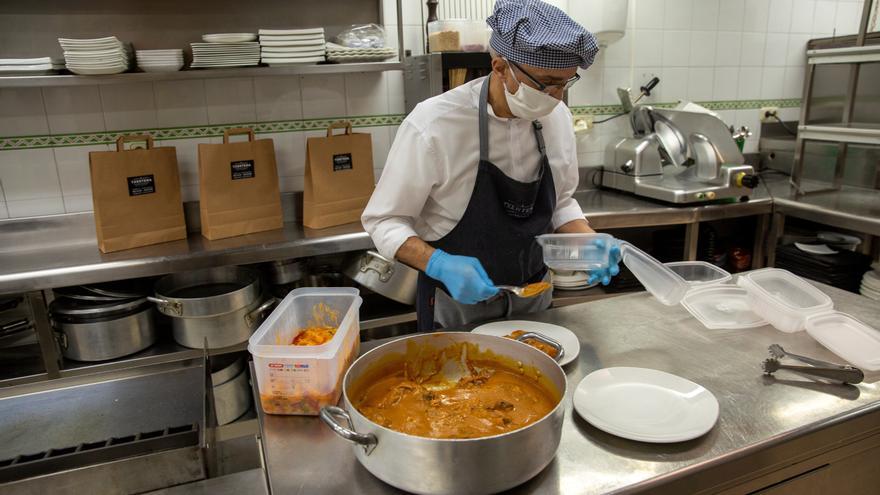 Madrid, May 15 (EFE) .- “Romanticism” has given way to a “greater business vision” of chefs, who have also learned to value free time more before schedules that make reconciliation difficult. These are some of the positive lessons they draw from a pandemic that has hit their businesses hard.

The questioned restrictions on the hospitality industry – total closures, space and time limitations or perimeter closures – are declining, but they have left lessons for the sector as the only positive note of a crisis that, according to the Hospitality of Spain, has so far cost the closure of 85,000 establishments.

“Romanticism is very beautiful but now we look at the numbers more,” Miguel Carretero acknowledges to Efe, with a recently released Repsol sun in Santerra and also at the head of the homonymous neotavern in Madrid, one of the many who chose to diversify with the food delivery. “It was difficult for us to act as entrepreneurs and we have learned,” he adds.

“At the management level we have put the batteries,” says Carlos Hernández, who inaugurated ConSentido in Salamanca in the middle of a pandemic after a wide and recognized professional career.

But he also points out that we must rethink working hours in the hospitality industry: “Maybe work can be concentrated in a few days and certain times, because there are still some lunches and dinners” that are not profitable and that would contribute to “greater stability. of the teams”.

David Vilà agrees, with three soles in Alkimia (Barcelona), who remembers that the closings at night in his city allowed a greater work-life balance and family, one of the great pending tasks of the hospitality industry and the aspiration of the new generations: “They prefer give up income to buy time. ”

For this reason, Alkimia will maintain its policy of closing Saturdays and Sundays “because of that sensitivity” and to “generate more stable teams.”

From La Fábrica (Burgos), Ricardo Temiño explains to Efe that in the pandemic he has improved the management of the restaurant, “creating a better digital infrastructure, improving scandals and improving ourselves.” “We are not great managers because our daily work absorbs us, but now we have had time for it.”

Samuel Moreno, from Relais & Châteaux Molino de Alcuneza (Guadalajara) also points out that cooks are emerging as “better managers” of the pandemic: “We were not used to managing resources with this scarcity and we are going to be more productive,” he assures Efe.

“I have been able to better organize the teams and settle the steps of a project that otherwise would have limped”, admits Miguel Cobo, who was stopped short by the covid of his great dream in Burgos, Cobo Stratos, with the double concept of Tradition and Evolution; in the latter, temporarily parked, where he was going to explain human evolution through different culinary conservation techniques.

Focusing for the moment on Tradition, with a Repsol sun, he explains that the stops generated by the measures of the Junta de Castilla y León have served him, in return, to “reflect, spend more time with the family and to recover the flavor of a vermouth “. Also to know “who supports the hospitality and who does not”.

With a recently released third sun, Aitor Arregi (Elkano, Getaria, Guipúzcoa) believes that the pandemic has in some cases strengthened the relationship between cook and producer, something that he has been developing throughout his career with the fishermen of that coast. “It is necessary to make a sailor knot between both sectors,” he claims.

Although most are satisfied with the response of the customers, David Pérez, from Ramales de la Victoria (Cantabria), criticizes that the pandemic has not changed bad habits such as the ‘no show’ (book a table and not appear): “It keeps happening and it is scoundrels and rude who play with the work and sweat of many people. ”

Tags: Chefs, learned, pandemic, they have