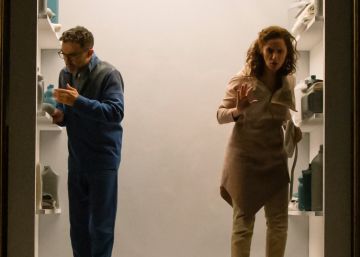 The public is quietly and expectantly entering the reopening party of a large classical museum, in any city in Europe. There are many people contemplating the great works of art that hang again from its walls. Suddenly a huge explosion is heard. Everything seems to fall apart. A man and a woman have left unharmed and hide in a cleaning room. It is he who has helped the woman to seek that refuge from the spectacle of bodies shattered on the ground. The hours of confinement in that hiding place, isolated and without knowing what is happening outside, give for much conversation. Attempt The moments immediately following a jihadist attack are on the scene to begin a journey through the manipulative power of the word of one and the other. Written by Félix Estaire and co-directed by the author and Xus de la Cruz, the work is a song against fear and in favor of empathy with the contrary. María Morales, Eva Rufo and Ángel Ruiz set up this function that premieres on Thursday 16 in the small room of the Spanish Theater in Madrid.

With a powerful scenography in which the paintings are opened to other scenarios, whether temporary or geographical, Attempt It is narrating, on different levels, the clarifying meeting and the confessions in that cleaning room between a museum worker and a high-ranking government communication officer, while abroad the director of a public television fights against the pressures and manipulations that you want to impose. Nothing is what it seems in Attempt, a function of great dramatic tension. As if from a thriller it will be, the work, a whole journey through truth and post-truth, discovering the pain of the victims, the power of the media or the manipulation of reality.

Félix Estaire (Madrid, 1976) recognizes that the lies of the Government of José María Aznar after the jihadist attack of 11-M in Madrid, attributing to ETA the authorship of the attack, three days after the holding of a general election, served as inspiration to write this work, which investigates the motivation of people to carry out certain things. “That attack on the trains of Atocha, in Madrid, changed the political sign in Spain. Perhaps if the Government had gone with the truth ahead the PP would not have lost the elections, ”says Estaire. But beyond a specific case of a terrorist massacre and the attempt to control the story, the author also puts the focus on the specific authors and wonders, after an essay of Attempt: “What leads people to put themselves in borderline situations to get something they consider fair?”

This work follows in the wake of its previous function, Riot gear, in which a riot policeman ended up feeling a state terrorist. “With this diptych of terror I wanted to mix extreme situations to show the boundaries between fear and empathy, between the citizen of the street and public institutions, between the legal and what makes us believe that it is legal from power , how words can be manipulated depending on how and who says them, ”says Estaire, who for the first time co-directs a work of his, convinced that, on this occasion, he needed another look for the staging and that the text“ no It will remain as it is. ” This is where Xus de la Cruz appears (Guadalajara, 1978), with whom the playwright has been collaborating for years. “It is a text that asks and throws the question to the patio of seats about the concept of truth, the control of the story at the service of economic or political power and the media or fake news. The three characters embody a different view of the truth. One of them believes that the truth exists, another for whom the truth is relative and the latter raises his doubts between these two positions, ”explains De la Cruz.

“Terror exists, we carry it inside,” says one of the characters in the show. These fears, many false and sometimes fueled by media and social networks, exploit absolutely in this work. Estaire explains it well when he sets the example of the recent game that faced Madrid and Barça, last December. “The days before the meeting it seemed that we were facing a global catastrophe, with information that sought alarm and headlines about fear,” he says. The fear that is lived inside the collapsed museum is real, what is not so much is what each one tells.