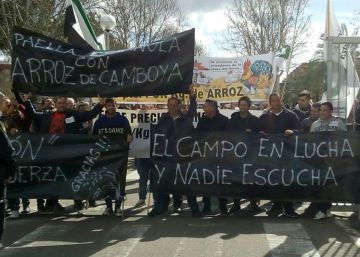 Everything that passes through our mouths has grown in their fields or has been raised on their farms, and we have never, in all history, been so well and so abundantly fed. There are capital empires about food. Even the logo that was identified with American domination was that of a hamburger chain. Large supermarkets, restaurants of all categories, internet portals and even gastronomic critics live with food. Cooks have long been modern Achilles revered as gods, and the Michelin Guide, something like Odyssey of the 21st century.

Everyone gets a slice of the basic need for nutrition. All, except those who produce food. One of the cruelest paradoxes in Europe is that it glorifies food while condemning those who take it out of the field to ruin. It is not only that children believe that milk comes out of a cardboard, but that we have moved so far away from the farmers that we do not even recognize them when they are put before us. Even in the debates that most affect them, such as depopulation, they are mere comparsas: that agriculture and the demographic challenge belong to different ministerial departments makes it clear that no one imagines a future with them.

Therefore, when they protest a wage increase that is sold as an incontestable achievement, nobody knows what to think. We lack context to interpret those clashes with the Civil Guard because the last time we saw some peasants fighting with uniforms, Durruti still lived and there was no television. We do not know what fly has bitten them because for decades we have not shown the slightest interest for their progressive ruin, for their weariness and for how thousands of towels have been thrown away. But there we are, having dinner what they produce while we see how they make it.