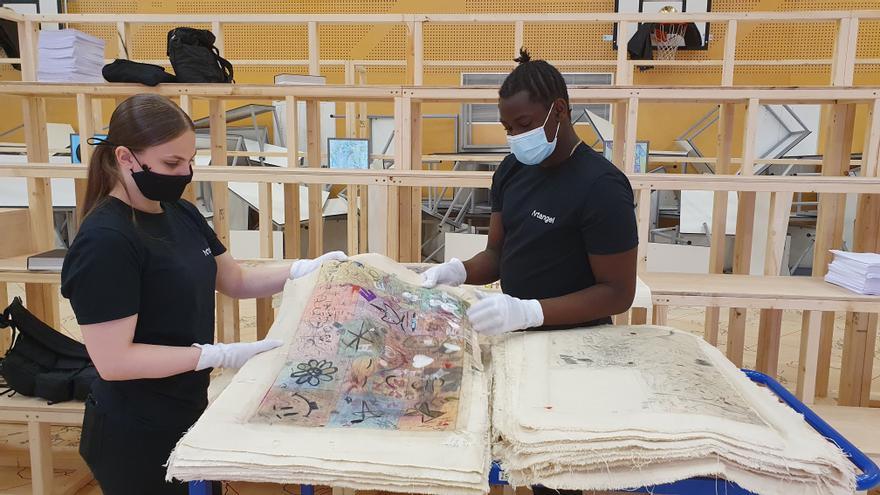 London, Jul 23 (EFE) .- Art and education embrace in the new exhibition of the Colombian artist Óscar Murillo, winner of the prestigious Turner Prize for visual arts, who returns to the London school where he studied to explore what students from all over the world draw on their desks.

More than 40,000 canvases by 100,000 students fill the gymnasium of the Cardinal Pole school in the Hackney district of East London, the setting chosen by the artist to present for the first time in full “Frequencies”, his project of long-term development together with political scientist Clara Dublanc.

Eight years ago, Murillo began sending blank canvases to schools around the world with the requirement that they be glued to class desks for a semester so that students, ages 10 to 16, could unleash their freedom. imagination.

The initiative was gaining momentum until reaching 350 schools in 34 countries, such as Brazil, China, Nepal, South Africa, Sweden, Turkey, Lebanon or the United States, a dance of latitudes that, despite the distances that separate the students , reveals a range of motifs and drawings common to most canvases.

Hearts, skulls and rainbows are the most popular doodles, although there are also numerous references to world-famous pop icons, such as Beyoncé, Cristiano Ronaldo or the series “Game of Thrones”, unmistakable symptoms of globalization, in Murillo’s eyes.

“There is a common desire to capture the cultural context. We live in a world where there is a trend and a globalizing force that causes many of the styles, rhythms and interests to be shared in different countries and continents,” Murillo, 35, told Efe. years.

The artist emphasizes that the exhibition, free to access and open until August 30, is a window into the minds of children, beings “still invisible to society, who are in the process of assimilation, of entering into a doctrine Social”.

To give them a voice, Murillo offered them canvases, which act as “a recorder of movement and time”, with the aim of capturing and describing the current ‘zeitgeist’ from the point of innocence and the purest creativity.

The drawings are accompanied by the installation “Total collapse”, made up of 200 desks stacked chaotically to represent the impact of the pandemic and neoliberal policies in the field of education, a central theme in the work of the Colombian.

For Murillo, who came with his family to the United Kingdom at age 10 in search of new horizons, returning to the London school where he took his first steps has a certain “romantic notion”, now that he is already a consecrated artist and with a Turner Prize. in the pocket.

The artist believes that the multiculturalism that permeates every corner of the Hackney neighborhood, “one of the most diverse in the country,” blends seamlessly with the global history conveyed by the show, something that he says helps him connect with the public.

After exhibiting in London, Murillo will visit Italy and the Netherlands in the coming months, two countries that add to the list of places that already know his exhibitions closely, such as the United States, Germany, China, Japan and the United Kingdom. United.

However, the pandemic forced him to stop his international ambitions for a few months, a break that the artist took advantage of to retreat to his roots and return to Colombia for a season in which he dedicated himself to community activism.