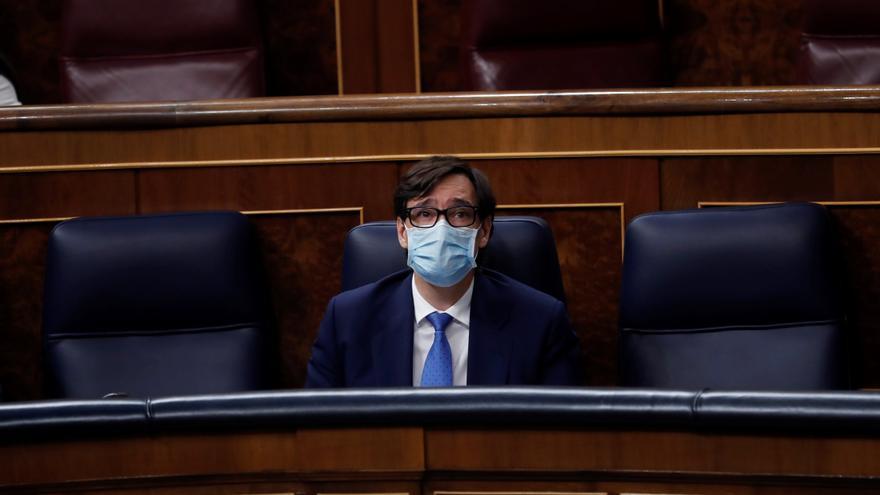 10/4/20 – A survey indicates that seven out of ten Spaniards do not want a total confinement. Fortunately, the regional and central governments agree to do everything possible to avoid it (Spoiler: They do not do it).

10/23/20 – A high school student at the Instituto Antonio López de Tres Cantos (Madrid) manifests cold symptoms and is quarantined at home without registering. It takes 15 days to do the coronavirus test (antigen test). In fact, he had just returned to face-to-face classes. By then it is logically negative. No one knows whether or not he had COVID-19. It never appeared in the data as positive or as possible positive. If you didn’t have COVID-19, your quarantine was useless. If it did, it was not recorded, it did not feed the epidemiological models and, above all, it did not affect the statistics of the municipality or the Community of Madrid. Faced with these cases that neither effectively protect students nor help to understand and control the contagion curve, many of them hide the symptoms. They cannot miss the classes in the year that the selectivity is played or, simply, their family cannot take care of them during the workday – especially if it is for nothing. It is even worse in primary education, because parents who have to care for their children in quarantine, but who have a negative PCR in COVID-19, they are not entitled to paid leave.

10/26/20 – One of us shows, throughout the morning, malaise, body pain, moderate respiratory failure and low fever. In principle, it has not been exposed to infected by COVID-19. It could be a common cold. Calls the medical attention phone for COVID-19: a teleoperator asks the symptoms, transfers them to a doctor (in his version: a curious game of the broken phone), and responds to the patient that they are not being tested for mild cases, that confine yourself to home and go to the emergency room if you develop severe respiratory failure. He recommends making a phone appointment with your GP. Unfortunately, the medical appointment service indicates, in the next call, that “there are no appointments” (thus, no time horizon), and in the health center they do not even bother to pick up the phone. It is necessary to wait and, if there is no severe respiratory failure, the potential case is neither registered nor traced.

10/27/20 – A co-worker, after 14 days confined because his wife, a high school teacher, has had a student with COVID-19 in class, returns to work. His wife has not been diagnosed because the Junta de Andalucía was no longer testing teachers exposed to students infected by COVID-19. If they don’t develop symptoms, they continue teaching. Finally, after insisting a lot, she got the test 10 days after contact. Two days later he received the result: negative. If it had been infected asymptomatic, it would have had time to infect many students and co-workers.

10/28/20 – A colleague, exposed on two consecutive days to colleagues infected with COVID-19 outside of work, is reinstated after 14 days of quarantine. The CSIC’s prevention service tells you that you must quarantine for 14 days (since, although the Government has reduced it to 10, it is aware that the risk is still high at the end of that period), but it refuses to do a test to confirm or rule out infection; And since the public health is not testing “low risk” contacts, she decides to pay for an antigen test (very unreliable in asymptomatic patients) in the private health sector to find out if she was infected or not – as is doing a part of the population, which can afford it, in what represents a disguised privatization of the diagnostic service. Upon completing quarantine, however, the prevention service does carry out a PCR test before authorizing the return to work.

10/31/20 – Francisco Marhuenda, director of La Razón, during his participation in the program La Sexta Noche, makes a fiery defense of the need to avoid any trade or mobility restriction that could “harm the economy” and argues that those who defend confinement are so only “the officials” because “they have solved their lives.” He reinforces this pilgrim argument by affirming that epidemiologists can advise confinement because they are hardly affected by having their personal finances resolved. As if the epidemiological models and the figures of the pandemic respond to the personal circumstances of the scientist who analyzes them …

3-4 / 11/20 – Asturias first then Ceuta, Melilla Y Euskadi, request home confinement. But the government refuses to apply them, to “safeguard the economy” and proposes to let “two or three weeks” pass to evaluate the measures currently imposed. Meanwhile, with much lower numbers of infections and deaths per inhabitant, Germany, England, Portugal, France, Belgium and Austria they adopt them, and Italy prepares them – including closing restaurants, bars, lounges, swimming pools and gyms. Even the Netherlands, a champion along with Sweden of the euphemic “intelligent confinement” (which has caused some of the highest contagion and fatality rates in Europe), decrees a partial confinement and prepare a total one.

11/4/20 – The number of cases it continues to grow in Spain, and already triples the maximum reached in spring (end of March). And, with a decreasing effort to test asymptomatic and mild cases, the argument that these figures are not comparable to those of spring because now many more cases are detected is held less and less. In fact, the number of deaths it is also three times what it was when the confinement was decreed in March.

The time to “protect the economy” by avoiding lockdown is over. Protecting it now involves confining it as soon as possible, drastically flattening the curve, and then applying the prevention, tracking and reinforcement measures of primary care that can keep it working as well as possible, until the improvement in treatments or a vaccine we allow to return to a certain normality. The later it is done, the longer it will have to last and the harder it will impact. What is striking about the case is that this seems to be known to all of us.

The partial and “creative” measures should have been applied five months ago, when the lack of refinement began, and we would not have gotten this far. In fact, some of them were included as conditions for phase advancement during de-refining. It is so difficult to understand that some regional governments did not apply them, embezzling the funds received to fight the pandemic, as the central government did not demand their application.

Why have all these “intermediate” measures, which have been applied in recent months, not been successful? For policies to be effective, it is not enough that they have a promising or elegant design: the key is in their implementation. Most of these measures were introduced already during or after the de-escalation, but the lack of will, effort or capacity of the administrations that had to implement them turned them into a dead letter. Among all of them, a key measure stands out: the tracking, detection and early treatment of new cases. A measure that required a decisive investment in personnel and technical resources, which cannot now be implemented overnight.

By not doing so, it is now impossible to introduce soft measures and monitor their success, as the government intends. With a time from infection to detection of almost two weeks, and three weeks or more between infection and admission to the ICU or death, it would already be a huge risk to do something like this with such high numbers of infections: if the measures do not work, we will find out very late. But in addition, the early detection and tracking system is not only tremendously deficient, but it is getting worse day by day (in some cases, apparently premeditated to mask the real figures) – making infection data less and less reliable. This leaves us only with the criteria for saturation of ICUs and deaths, which means that our ability to quickly assess containment measures is insufficient. If we add this inability to the lack of effectiveness of “alternative” measures and the lack of rigor with which they have been implemented in the past, we can only conclude that these are cosmetic measures that only seek to postpone the inevitable.

And yes, it is going to be tremendously hard. But the time to avoid it has passed and those who could have avoided it did nothing. When you make a mistake, the worst thing to do is keep digging in the same hole. You have to take note, correct it as soon as possible and – above all – not to do it again.

The false dichotomy between health and the economy will end both. We understand that partisan struggle makes it very difficult to do the right thing. But there are times when you cannot govern thinking only about the next elections. Many people are getting sick, dying, or surviving with serious long-term sequelae. It’s good to waste time.