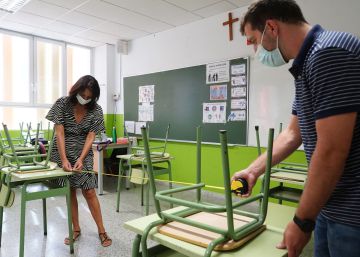 In recent days, there are several public officials who have warned parents of their obligation to take their children to school. The most severe was the Councilor for Education of the Community of Madrid, Enrique Ossorio, who went so far as to ensure that parents who left their children at home could face prison terms. Without going so far, but along the same lines, the Minister of Education Isabel Celáa proclaimed: “You have to go to class; it is an obligation.” Her department, she explained, prepares a legal report to analyze how to deal with school absenteeism that may occur due to fear of the coronavirus.

Ossorio’s threat was inspired by article 226 of the Penal Code, which establishes that “whoever fails to comply with the legal duties of assistance inherent to parental authority (…) will be punished with a prison sentence of three to six months or a fine of six to 12 months. ” Among the aforementioned duties, contained in article 154 of the Civil Code, parents have to “educate and provide comprehensive training for their children”, which includes ensuring their attendance at class.

However, in view of how the judges have interpreted the Penal Code, it is excessive to affirm that parents who are afraid and do not take their children to the classroom are going to end up in jail. As José María de Pablo, a partner at the Mas Calvet law firm, explains, “that is a simplistic reading” because “the crime of abandoning the family requires that there be a special neglect or neglect on the part of the parents.” That is, for absenteeism to be considered a criminal offense, a willingness to neglect the children must be demonstrated.

That was precisely the argument used by the Girona Provincial Court, in 2019, to acquit parents who had been convicted in the first instance for not taking one of their children to class. According to the sentence, after the minor was found to have medical problems, the defendants preferred that their son be educated at home for fear that attending school would pose a risk to her health.

“We are not facing a neglect of the parents towards the minor’s schooling obligations, but rather a mismanagement of the medical problem,” reasoned the magistrates, who explain that this case of absenteeism is more like an “excess of zeal “than an abandonment of their parental functions. “Certainly, the conduct of the accused is reprehensible but in no case can it integrate the subjective part of the criminal type of family abandonment,” they concluded.

The neglect of parents, in any case, is not the only element necessary for truancy to become a crime. As the Supreme Court has established in various resolutions, the abandonment is also required to be “patent and lasting, and not merely sporadic or occasional.” An example of this is the conviction of a mother whose 12-year-old daughter accumulated 717 and 715 unexcused absences from class during two consecutive school years. “It has been proven that it is a serious, repeated and prolonged school absenteeism,” argued the sentence handed down by the Albacete Provincial Court in 2017.

That jail is a distant risk for fearful parents does not mean, far from it, that the legal system authorizes them not to take their children to class. Schooling, as established by the Constitutional Court, is part of the right to education (enshrined in article 27 of the Magna Carta), and cannot be supplemented by teaching at home or through alternative means.

“The right to education in its condition of right to freedom is not enough to protect, even prima facie, an alleged faculty of parents to choose for their children for pedagogical reasons a type of education that implies their non-schooling in approved centers of a public or private nature “, the Constitutional Court asserted in its sentence 133/2010.

The procedure analyzed the appeal for protection presented by some parents who claimed their right to choose the one known as homeschooling (teaching at home). In their writing, they alleged that their children had a better education than they would receive in any public or private center (they stated that the minors spoke five languages, received music, mathematics, science and language classes, and even instruction in ethics) and that the social services had not detected any socio-family problems in them. The court rejected such arguments and stressed that parents have the freedom to choose a school, but not an education outside the school system.

“It is not about encouraging school absenteeism, far from it, but neither is it about intimidating families with the possibility of being sentenced to prison terms or criminal fines,” says Delia Rodríguez, family lawyer and managing partner of the Vestalia Asociados Law Firm. In this sense, the lawyer recalls that both judges and prosecutors try to push for the solution to a lack of schooling to be resolved in other ways rather than through the Penal Code.

In this line, the Criminal Court number 2 of Vigo ruled, in a 2012 ruling, in which the case of a woman accused of not taking her son to school was resolved. Although the judge confirmed the existence of a breach of duties on the part of the mother, it established that this was not sufficiently important to reach the category of crime. And he affirmed: “It is not the criminal procedure where the responsibility of the mother with respect to academic and integration deficiencies that the minor presents must be clarified.”

Most cases of school absenteeism are channeled through social services, which try to solve the situation through dialogue with parents. Even administratively, the objective, rather than sanctioning, is to get children to go to class. In this way, only the most serious and persistent situations are transferred to the juvenile prosecutor’s office.

According to Rodríguez, the judges, in this type of case, are sensitive to circumstances such as the involvement of parents with the teaching staff, the monitoring of the syllabi or the hiring of a private teacher (in person or online). Also to whether there is any justification that supports why these parents have made the decision not to take their children to school, such as that they are risk personnel or that they live with people who are, among others. For all this, the lawyer predicts that the solution adopted by the Administration to deal with absenteeism derived from the extraordinary situation caused by the pandemic will not be, nor should it be, that of prosecution.

Legal resources in the hands of parents

In any case, there is a channel for parents to be legally authorized not to take their children to school, either because they understand that the center does not comply with adequate health security measures, or because attending class is a The health of the child is high risk (due to having a previous illness) or that of a family member living with him. A mechanism that, having the judicial endorsement, would protect them against an administrative or prosecutorial action.

Article 158.6 of the Civil Code enables parents to request before the judge “the provisions they deem appropriate, in order to remove the minor from danger or to avoid damage to their family environment.” Among the measures that can be requested through this precept, Delia Rodríguez points out, there is an authorization not to take the child to school. Of course, the lawyer specifies, in case you want to activate this instrument, “it must be possible to prove what is alleged”, since the center has not adopted sufficient protocols (through, for example, communications with the management of the same) or the illness suffered by the child or the person around him (with medical reports). That is, she emphasizes, it is not enough to appeal to a fear, but there must be well-founded evidence that can be assessed by the judge.

According to the airlines, there is twice the probability of hitting the primitive than of getting infected in a plane

Spain beats the daily record of infections for the second consecutive day with 20,986 new cases