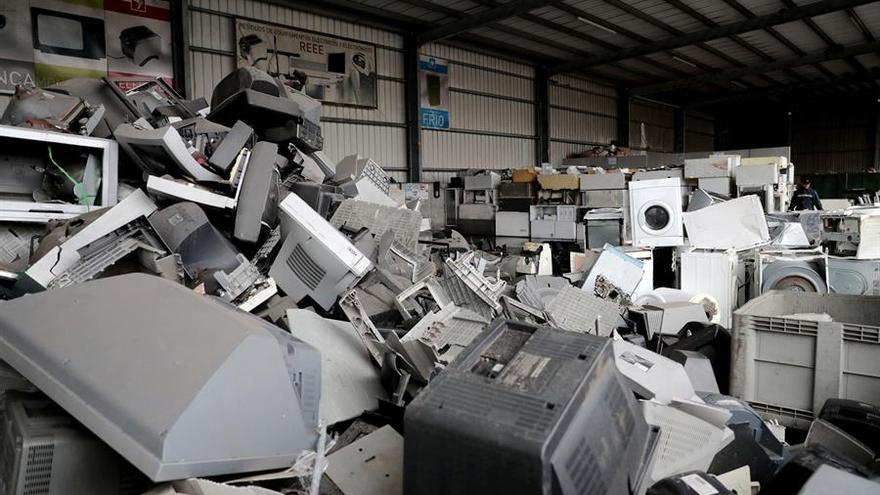 We can see that we are in a consumer society without measure, which requires an enormous amount of raw material and resources and, in my opinion, doomed to failure, when we see the amount of garbage we generate. This article will not talk about food waste, or food that spoils because we do not have time to consume it, or plastics and packaging, the type of waste that occupies the most in homes and that we have to withdraw more frequently. Nor will we talk about the crystals, or single-use glasses, that we cannot continue to accumulate at home after having saved the four or five that we will use, nor about cardboard or paper, that advertising and for some years (months? ) home shipments have increased alarmingly. Finally, we will not talk about that “rest” where there are a lot of single-use and everyday items such as diapers, paper napkins and a long etcetera. Of all this there is a good bibliography such as the work of Elizabeth Mazzolini, from which we could highlight “The Everest Effect”.

What will be discussed, in this case, is furniture, electronic devices, toys and other elements, for example those used by boys and girls, such as high chairs, car seats, tables and chairs adapted to their height, and others. . And it is that it draws a lot of attention when you see this type of object in the garbage on the street. Personally, I usually look at what is there, but around me they have already called my attention several times: “what are you looking at there? That is garbage”, “leave that, do not touch it, it is garbage”. Fortunately, there is an unwritten rule or a tradition that many of us follow, and that assumes that what works, but no longer wants to use for whatever reason, is left out of the containers, aside, in case. someone wants to make use of it.

But it is frowned upon to collect something from the garbage, as I explained. Why is it frowned upon? What’s wrong with picking up a printer, table, or toy from the trash that someone no longer wants to use, but is in good working order? Why do some people see it as wrong to collect and use what others no longer want? Do we really need a new printer at home to print a few sheets a year? Technology advances and elements become obsolete so quickly that, from one year to the next, we have on the market a more powerful printer, or with less ink consumption, or that takes up less space with more functions, or simply with a design different that makes it look more modern and, therefore, the one you have at home looks old and needs to be replaced, even if it works. Can the planet sustain that so many printers are made and then their components dumped in a landfill? Does this represent an advance of humanity?

The case of printers is paradigmatic. If you call or go to a technical service with a printer asking for a quote to fix it, the normal thing is that they tell you that it is not worth it, that it is “better” to buy a new one. And it is worth asking, better for what, for whom? For the domestic user who prints a few pages a month and who in a year or two will have to buy another one again? Is it best to go shopping or spend your time analyzing models and prices, and comparing? Is it best to take care of throwing out the old or throw it away and put the new in? Or accumulate and then order? Do we have room to accumulate? Do we have time to use all the accumulated? Do we want to use our time in ordering, discarding, replenishing?

What I was saying about printers has happened to me, like many people. The one I have I picked up from the trash. It was in perfect condition. I checked that the power cord was not working properly, I bought an original power cord at your brand store, and voila. I had a new, quality printer! Some people around me think that it is bad just because I picked it up from the trash: “for something they will have thrown it away, something will have ”, they usually tell me. Recently an error appeared on the screen:” cartridge incorrectly installed “. print in any way. I had tried a thousand times to remove and put the cartridges back, to clean them. Nothing. I looked on the internet, I did not find a solution. I called the computer store and the response was as expected: it is not worth it fix it, better buy a new one. I thought: “what if I buy a new cartridge and try to see if the error disappears?” According to the technician, it was not worth it, since for the price of the cartridge he had a new printer. To a large area, I looked at printers and none of them were worth the same as cartridges. What’s worse, no cartridge is so cheap that it was worth buying the printer to avoid spending so much on ink later. I bought my printer cartridge. It worked. The printer prints and with high quality and fast. I use it is residual, I use it to print the odd document that I prefer to read on paper, and little else.

The fact that it is frowned upon to take things that others have discarded makes me reflect, not only on how internalized the throwaway culture is, but also on what we consider the practices of good people, or of success. It seems that it is frowned upon to collect used things because it is considered to be typical of people without resources, of people who cannot buy these new things. And being poor is frowned upon. It is a failure. We have to show that we have made an effort and that we therefore deserve a smartphone every year, new and fashionable clothes every season, a new printer every time it fails, and new toys or children’s chairs, even if they last a year. .

How long has a boy or girl been able to use, for example, a plastic motorcycle? A year or two? From two to four years old, stretching the toy a lot and thinking that it loves it? The subject of children is especially hot because of how short it lasts and because of the amount of things they have. Between what they grow up and what no longer serves them, and who get bored with their toys, we generate an enormous amount of garbage. I am happy to know that in many cases there are informal networks of friends or family among which things are passed from older children to small children who can use them, and even so, a lot is thrown along the way. There are also second-hand stores and, lately, apps that help people sell things they no longer use are quite fashionable.

In conclusion, I would like to make a plea in favor of extending the use of things: to repair them, to sew them, to take them to the technician or give them away to acquaintances if they are no longer going to be used. You can, in the Dossier of Economists Without Borders on circular economy is deepened on this topic. I remember my grandparents, who took such good care of everything and could enjoy wearing clothes and other things for a long time. Doesn’t it bring some peace to think that there is no need to go back to looking at stores and models to change any element of the house? In my case, I feel that it leaves me more time for myself, relaxes me, and frees me from an obligation.

Economistas sin Fronteras does not necessarily identify itself with the author’s opinion and it does not commit any of the organizations with which she collaborates.