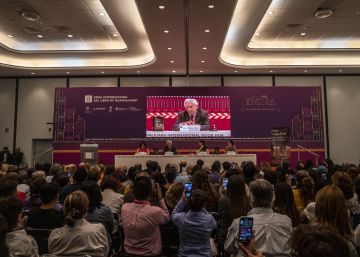 Many years before winning the Nobel Prize for Literature, Mario Vargas Llosa He tried to understand at a distance when his country, Peru, had screwed up. Behind one of the most emblematic starts of one of the peak works of the boom Latin American was a journalist who wrote in the morning before going to work at a news agency in Paris. The budding author lived three years on an emotional roller coaster of "enthusiasm and depression" that ended up forging him as one of the essential literary voices in Spanish. The result of this process is Conversation in the Cathedral, which turns half a century since its publication in 1969.

“What a glorious thing it is to write novels!” Vargas Llosa wrote that year to Abelardo Oquendo, one of the friends who, in the distance, accompanied him on the tortuous path of writing. Enthusiasm reflected one of the good times. "You feel like Samson throwing the columns of the temple," he said in the same letter to his friendship, to whom he finally dedicated the novel with fellow writer Lucho Loayza. The epistolary exchange is remembered by the academic Carlos Aguirre, historian of the University of Oregon, in an appendix to the commemorative edition of the novel, today published by Alfaguara.

Vargas Llosa recalled this Saturday in the Guadalajara FIL those years in which he created the four hours of talk between the disenchanted journalist Zavalita and the club Ambrosio in a canteen where "the smell of frying, feet and armpits flutters, spicy and enveloping, over the straight or hirsute heads." The talk has as background the Peru of the dictator Manuel Odriá, who ruled the South American country between 1948 and 1956.

Vargas Llosa confessed that the first year of writing the novel was the most difficult. I knew the story I wanted to tell. It had the characters and episodes that would form it, but how to use them consistently? The writer defines those moments as full of "darkness." "I got the gray hair I have," said the author, who could not find the right structure.

Finally, as happened with other members of the boomVargas Llosa found the best advice by reading William Faulkner. “I discovered the richness of literary technique by reading it. He was the first writer I read with pencil and paper to understand the constructions of his novels and stories, how he broke down the stories and then recomposed them, ”explained the 2010 Nobel Prize for Literature.

Thus, it occurred to him to place his main characters in a canteen talk that served as a trunk for a “conversation tree” that evokes the encounter of many other characters. Already with that decided structure, the rest was to polish an extensive novel that Seix Barral originally published in two volumes.

One of the keys to Conversation in the Cathedral It is its language, defined by its author as "gray, lead." The story avoided telling the coup that brought Odriá to power, and focused on showing the effects that the military government caused on Peruvian society. That is why Vargas Llosa moved away from a pyrotechnic style. "I avoided the brilliance, the flashy adjectives are gone." The novel "was incompatible with the display of beautiful, bright language."

Before arriving in Guadalajara, the Nobel left a trail of controversy after his brief visit to Mexico City. On Friday, at the Museum of Memory and Tolerance, Vargas Llosa dedicated a few words to the Government of Andrés Manuel López Obrador, who turns one year this Sunday. “I am very afraid that this Government is going back a little to Mexico, that it was beginning to emerge from that perfect dictatorship and I am very afraid that populism, which really looks like the ideology of the president of Mexico, will lead us again to the dictatorship, perfect or imperfect ”, He said taking up the famous phrase he coined about the PRI regime in September 1990 in the colloquium The twentieth century: the experience of freedom.

The comment was answered by Beatriz Gutiérrez Müller, the wife of López Obrador. "I see some writers who have won the Nobel Prize badly … I am very afraid that fanaticism and dogmatism, which seems the ideology of some, will lead us again to the perfect pamphleteer", wrote on Facebook the historian, who coordinates works of Historical Memory and Culture in the Administration of the so-called Fourth Transformation.