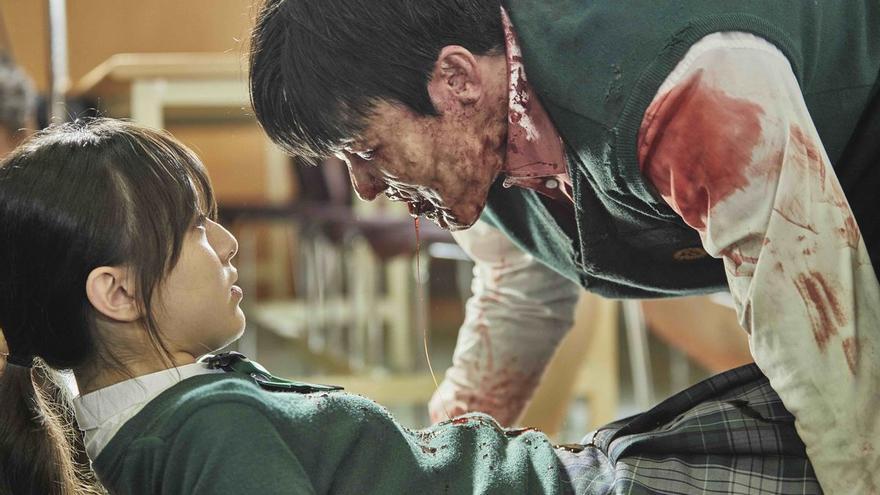 With its implementation in U.S and Europe about to hit the ceiling, Netflix now has the not fully exploited Asia-Pacific region to slow down the slowdown in new subscriptions a bit. The strategy is doubly beneficial in the case of South Korea: the productions of this economic power can draw serious attention outside its own borders, as certify bombs of the caliber of 'the squid game' and 'Head to Hell'.

Netflix plans to release in 2022 until twenty five south korean series and movies, ten more than last year. Before, for example, the remake of 'The Money Heist', another strong bet arrives this week: 'We're dead', zombie horror odyssey with high school scenery, a bit manga style (after anime) 'High School Apocalypse', but actually based on the 'webtoon' created in 2009 by Joo Dong-geun.

As in many other examples of South Korean fantastic, gender delirium meets critical realism. Only in its first minutes there are already allusions to serious problems of the country's youth such as 'bullying' and the risk of suicide associated with it. The series starts with fight between a group of thugs and one of their victims regulars, Jin-su (Lee Min-goo), who made the mistake of mentioning the gang leader in his letter of suicide. In a supernatural turn of events, the beaten man seems on the verge of becoming a beater. All thanks to (or because of) his father's experiments on him to turn his fear into rage.

This 'mad doctor', the tragic Mr. Lee (Kim Byung-chul), is the science teacher at Hyosan High School, and his unique remedy against bullying is at the origin of the zombie virus outbreak that will rock the school for twelve episodes crossed by horror, love, action or humor: all the varied range of emotions and genres that fit in a South Korean production.

Scriptwriter Chun Sung-Il has the good idea to take his time introducing the main characters and not rush us headlong into the gore orgy, as happened for example in 'World War Z'. In that sense and some other, such as the prevalence of the traditional special effect, the series is more reminiscent of 'Train to Busan', quoted verbatim at some point. Thus, he manages to make the viewer worry about the fate of the orderly and diffident Cheong-san (Yoon Chan-young); from her neighbor, lifelong friend and crush On-jo (Park Ji-hoo), or from the former bully for whom the latter drinks the winds, the now kind Su-hyeok (Park Solomon). We can't talk about k-drama without a good love triangle to throw down our throats. Or maybe we should say ring: also the class representative, Nam-ra (Cho Yi-hyun), seems to make eyes at Su-hyeok.

'We are dead' is quite effective as a romantic tragicomedy, but surprises and really shines in his displays of zombie action, which has its merit if we take into account the overexploited subgenre. In their fight for survival, students can use everything: bow and arrow (an entire archery team demonstrates its aim), doors, fire extinguishers or mobile phones that are not only used to call. There are impact set pieces in every conceivable scenario; one of the best, the one in the dining room, is filmed in a virtuoso sequence shot whose possible digital tricks are barely noticed.

But, will it be able to seduce like 'The Squid Game' did? Against him is the inevitable familiarity of the proposition. In her favour, the presence of Lee Yoo-mi (player 240 in the aforementioned series) as part of the charismatic choral cast. Or the mechanics of the drama itself: this is, after all, like another great survival game in which there are fewer and fewer important characters left. Fewer students without receiving that fatal bite.