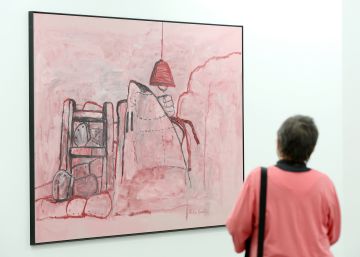 Few times the postponement of an exhibition had so loaded the artistic atmosphere. Is about Philip Guston Now, the retrospective of the American artist who was to open the National Gallery in Washington in June 2021 and then reach the Museum of Fine Arts in Houston, the Tate Modern in London and end up at the Museum of Fine Arts in Boston. After years of working on the show, the four institutions have decided to postpone it until 2024. The racial justice movement that began in the United States and the need to better contextualize Guston’s work around the Ku Klux Klan, the statement said, has led them to pause. A dead time that a hundred artists and intellectuals, from Adrian Piper to Lorna Simpson or Ellen Gallagher, signatories of a petition against this suspension, see it as an act of institutional cowardice at a time when uncomfortable ideas are more necessary than ever.

For the uninitiated, there is nothing ambiguous about Guston’s work. His cartoony works show the members of the KKK in quiet moments and communicate the disturbing reality of this group in their daily work. Guston, who died in 1980 at age 66, wrote that he had been hunted by the Klan since he saw them assault striking workers as a child in Los Angeles. Everything in his painting is an acid criticism, a call for racial equality. Guston was a prominent Abstract Expressionist until his artistic turn during the Vietnam War, influenced by civil unrest and social dissent. He often branded “American art” as a lie or a sham under dark, figurative painting that often included satirical drawings by Richard Nixon. Who knows how he would have portrayed Donald Trump if he was still alive.

The Guston case is the tip of the iceberg of a collapse called to become a culture war, the idea that best defines the art world this 2020 and that adds to the culture of cancellation, the star term in 2019. We talk about fear , and of many types. Fear of the viewer, wrong reading, wrong tone, restless patrons, breaking philanthropic love. Fear of violence, protests and neo-fascism. And we talk about self-censorship. Of four white curators expanding the showroom texts by the piece after George Floyd’s assassination in June. Of four museums that, with this gesture, admit not having enough confidence in themselves to contextualize the work of an artist, on the other hand, indisputable.

The pressure is extreme and it is not new. In the past three years, museums have become increasingly defensive about racial violence. In 2017 the Whitney Biennial faced backlash for presenting Open Casketby Dana Schutz, depicting the mutilated body of Emmett Till, a black teenager who was lynched by two white men in Mississippi in 1955. That same year, the Walker Art Center in Minneapolis removed a work by artist Sam Durant, called Scaffold, a gallows sculpture intended to commemorate several executions, including the hanging of 38 men in Dakota after the war with the United States in 1862, after local Native American communities opposed it. This summer, the Cleveland Museum of Contemporary Art canceled an exhibition of Shaun Leonardo’s drawings on police killings of black and Latino boys and men after several black activists and some museum staff opposed it. The museum’s director, Jill Snyder, was quick to publicly repent and resign two weeks later.

The election of Trump came to Mark Bradford with the commission already made to represent the United States at the Venice Biennale in 2017. He did not waste it. A threatening and disorienting space, with a large bag hanging from the ceiling, forced the viewer to get very close, almost glued, to his neighbor. Not an innocent action, as Bradford of African descent, like Simone Leigh, the next to occupy the American pavilion in Venice in 2022. In 2017, MoMA also responded to immigration policies with a historic decision. Not only did he close the museum at Trump’s inauguration, but he also hung works by Muslim artists breaking the traditional narrative discourse already established by Alfred Barr. In 2018 came the masterstroke, the chapter that will surely open the history of art in this 21st century. Nancy Spector, chief curator of the Guggenheim in New York, gifted the Trump couple with Maurizio Cattelan’s toilet in response to a presidential request from a van gogh For the salon. In the end, that golden toilet was called America.

Beneath that eschatological network is the world of American art. The Metropolitan Museum in New York, which was to celebrate its 150th anniversary in style, has laid off more than 80 employees from its staff and expects a deficit of 150 million dollars. The Whitney has gotten rid of 76 of its workers and the New Museum is close to 50. MoMA is not far behind: 130 workers among education and public service personnel are already out and the cuts extend to all areas of the Museum. The protests accumulate everywhere, also from the artists. Artists Relief organization says that 62% of them have lost their jobs and that 95% have lost income. ICOM puts the finishing touch: without aid 30% of museums in the United States will not reopen, although the strength of civil society is at a minimum.

In his four years of Trump’s mandate, he almost ended the process of disintegration of the federal structures, but then the pandemic arrived and with it, global chaos. When armed protesters entered the Michigan Capitol to protest lockdown and when the Black Lives Matter protests spread around the world soon after, the backdrop for the next five years was laid bare. A chaos from which there seems to be no way out, because surely the four museums have already condemned the exhibition and have intensified the culture war they wanted to avoid.