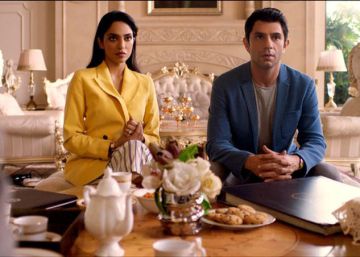 If the wedding is one of the most universal social ceremonies, accepted and adapted to different cultures, Made in heaven, the Indian series that Amazon Prime Video currently programs, uses it as a link between its nine chapters. Its two protagonists, Karan and Tara, have founded a company dedicated to organizing them, Made in Haven, but their interest transcends the event itself.

Each wedding, and nine, as many as chapters, are related to some kind of social problem of the many that exist in a country in which the cruel social inequality persists and the weight of the British colonial heritage interspersed with customs difficult to understand for the western look.

Marriages arranged by the parents of the contracting parties, weddings in one of the families of the royalty in which the father applies the feudal right of pernada, repressed homosexuals that accept the heterosexual union …, the very interesting series raises many of the questions that muddy the social relations, and in that it does not differ much from the rest of the world, and it does so with the frankness and freedom that allows a more minority distribution than the very popular Bollywood cinema, much more pacato in its proposals.

Two are probably the most solid claims of the series: the emerging feminism and the rights of the LGTBI minority. It is worth mentioning that article 377 of section XVI of the Indian Penal Code was declared unconstitutional by the Supreme Court in September 2018 and with its repeal, homosexuality was decriminalized. Naturally, the messages that underlie the series would not be as effective without the excellent production and realization of it.

The Canarian couple from ‘The Island of Temptations’: “I wouldn’t put my hand on fire for him”

‘MasterChef’ records in front of the Cathedral of Palma