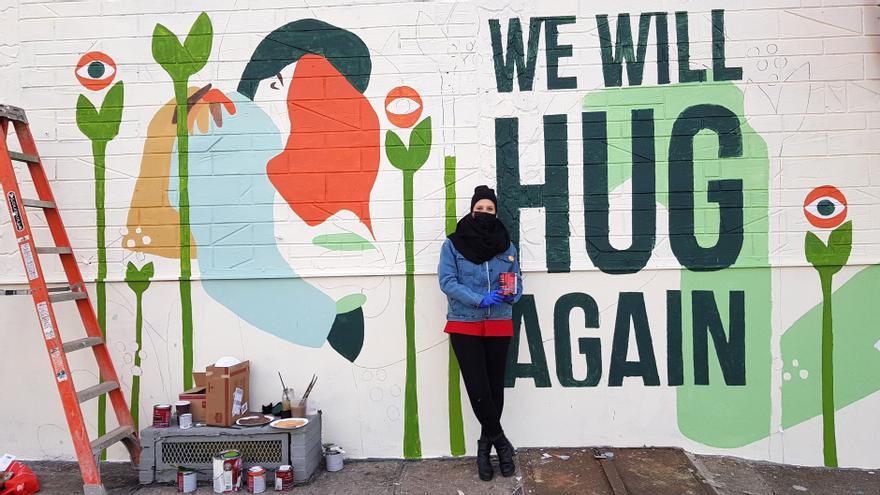 New York, Dec 26 (EFE) .- The fingers of the Spanish artist Vanesa Álvarez do not tremble, despite the cold, as they hold the brush with which she paints a mural on a street in the New York neighborhood of Brooklyn full of nostalgia and hope: “We will hug again.”

“The possibility of painting this mural arose to give a little more hope to the neighborhood, with this hard year we have been going through,” this Galician artist told Efe during a brief break from her work, which began this Tuesday and hopes to have it completed. this weekend, because the cold and the few hours of light slow down the brushstrokes.

As soon as he puts down his work tools, he takes off the thin rubber gloves with which he paints, to put on some woolen ones and “warm up a bit.” It’s seven degrees, but the feeling is five, and there are still traces of the snowstorm that covered New York in white last week on the edge of the sidewalk where he is doing his work.

A MESSAGE OF HOPE

The painting, in which pastel tones predominate, is commissioned by a nearby pop art gallery, La Casa de Bobblehaus, where two small collectives of artists from the Williamsburg area converge.

A couple embraces next to a large sign that in capital letters seems to scream what pretends to be a premonition: “WE WILL HUG AGAIN” (We will hug again).

“We will embrace each other again, because I hope that in spring we can, little by little, embrace again and that is why I also decided to use these colors that go more with winter,” says Álvarez before explaining that the work is also designed as something ephemeral, because the building where his imprint comes to life is scheduled to be demolished for next March.

For this reason, he continues, although he tends to use brighter colors, this time he opted for shades “a little duller, more wintry, because the wall may only last until spring.”

A HARD TIME FOR ARTISTS

On March 13, New York theaters, concerts and public events were closed at a time when the city was becoming the eye of the Covid-19 hurricane in the United States.

Broadway turned off the lights of its shows, the golden mile of museums – MoMa, Met and Guggenheim – closed its doors and the entire vibrant art scene of the city has languished since then, even as museums and art galleries began to recover. partly its activity during the summer.

“This pandemic, as for everyone, for the art world has been an almost dry stop, a pitcher of cold water,” says Álvarez who “had an exhibition in an art gallery in Manhattan in the summer that could not happen”, and some projects abroad, in addition to the classes he gave in the Bronx neighborhood on “public art” that “came to a standstill when schools closed.”

So “I stayed, like all artists, at home trying to do as much as possible online”, a time in which he took the opportunity to “finish an illustration book for children in the Galician language”.

“But it has been very hard and as you imagine, being a Galician living here, with many doubts about going home or not,” she adds.

The blow that the pandemic has caused to the world of culture, which for Álvarez has been greater for people like her who live “between education and art”, has served, however, to reinforce connections with other artists in a world that already feeds on support networks.

“Artists form connections, we tend to collectivize ourselves because all artists, but especially those of us who have such a social message, those of us who like to work with people, collaborative murals or work with the community, we tend to become collective, because it is the form “, he says after explaining that he is now in contact with various people through the La Casa de Bobblehaus gallery, the artistic residence where he lives or the” Project Art “collective.

A FEW PARTIES IN NEW YORK

Álvarez has just had a son, just three months ago, with his partner, the poet Marcos de la Fuente from Vigo; and although their intention was to travel to their native Vigo for the holidays, they decided to stay in the cold city of skyscrapers.

“We are very sorry, because we wanted to introduce our son to the whole family, but it seems to us the most responsible thing to stay here and avoid the spread, he will have to wait a bit to visit Spain,” he says with the mask covering his nose and mouth.

Therefore, in addition to an attempt to revive the spirits of Williamsburg residents, to show that the flame of “art street” (street art, in English) is still alive in New York despite the times and to send a cry of hope, the mural -confesses- “is also a small personal message to my family and friends in Spain, in Galicia, because we are also going to embrace again soon, I hope.”