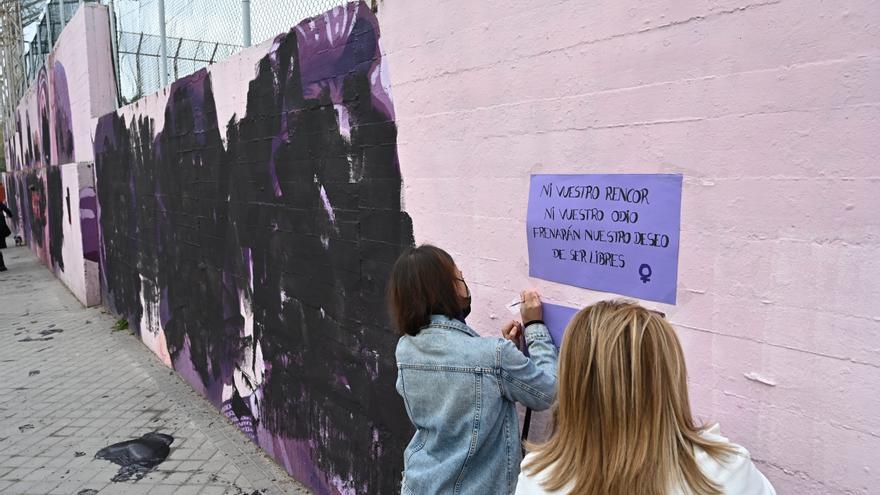 The mural in a municipal sports center in Ciudad Lineal (Madrid) was a feminist tribute from its conception, with the inspiring faces of fifteen pioneer women who went very far, such as the first woman in space, Valentina Tereshkova, or the neighborhood activist Rosa Arauzo who, without taking her feet off the ground, transmits the strength of 40 years of feminist and LGTBI activism behind her back. Those faces have dawned crossed out with black paint on International Women’s Day, this March 8.

It was a tribute in its conception three years ago, but it has become a powerful symbol when, at the suggestion of Vox, the district municipal plenary session approved its deletion to paint something else on top. After strong public opposition to defend the mural, Ciudadanos changed their vote and the danger seemed to have passed, until this vandalization had destroyed it. “This is not respecting art, or the history of women, or the fight for equality. The fight continues and we will continue to paint in honor of them,” said the UNLOGIC collective on its Twitter account, which was the one who she painted, with the help of neighbors and neighbors to the brushes.

The day before, the mural painting of Alcalá de Henares that replicated that of Ciudad Lineal, yellow paint spit also appeared, erasing the women’s faces, a few hours after he was visited by Vice President Carmen Calvo. In a wave of support for the mural, it is being replicated in various places, such as in a square in Getafe, commissioned by the City Council and made by the same artists as the original, at the door of the Ministry of Equality (also by the original authors ), posters in schools, t-shirts or an exhibition with reproductions promoted by the City of Coslada.

Around noon a group of about 20 people from the neighborhood began to gather, which has grown to approximately fifty, shouting slogans such as “Madrid will be the tomb of fascism”, “Fascists out of our neighborhoods”, “here we are the feminists “. They are part of the neighborhood platform in defense of the mural, which the Municipal Board has also come to ask “that the mural be restored” and the Board “fulfill what was promised, which is to protect and safeguard the mural,” as he explained to elDiario. is Jorge Nuño, one of the UNLOGIC artists. For this group, “it is too initial a moment” to know if and when they will be able to restore it, but they are waiting.

This morning the neighbors have proposed a series of actions, such as collecting signatures, putting up posters with photos of the women represented, as well as ideas to cover the layer of black paint and that “what we can see in this 8M is purple and not black, “explains Nuño.

Shortly after the start of this concentration, several National Police vans began to arrive. The Police, as reported by Efe, is investigating and carrying out procedures and steps to clarify and identify the culprits of the vandalization of both murals.

Students of the San Benito public school had a scheduled visit to the mural this morning, on the occasion of 8M and, after learning about the vandalization, they decided at first to cancel it and, after reflection, keep the visit because that would be “a very long lesson. larger”. With a muffled voice, an associate of the AMPA explained that “[los niños y niñas] they will be able to learn that unfortunately we have to continue fighting against pests like these that continue to attack us today. ”

“If we want to avoid more episodes like this, we must work for a feminism of all, without exclusions,” said the delegate of the Area of ​​Families, Equality and Social Welfare of the City Council, Pepe Aniorte, of Citizens, the party that changed its vote so that the mural did not disappear, in favor of another dedicated to Paralympic athletes. Along the same lines, the president of the district’s Municipal Board, Ángel Niño, from the same party, said: “Vandalism is vandalism, wherever it comes from. The discrepancy must be made from democracy and respect.” The councilor and spokesperson for Más Madrid in the City Council of the capital, Rita Maestre, recalled on her Twitter account that she demanded that the Madrid mayor protect the mural “after threats from the extreme right” and added that “machismo grows with the complicity of those who whitewash it. ”