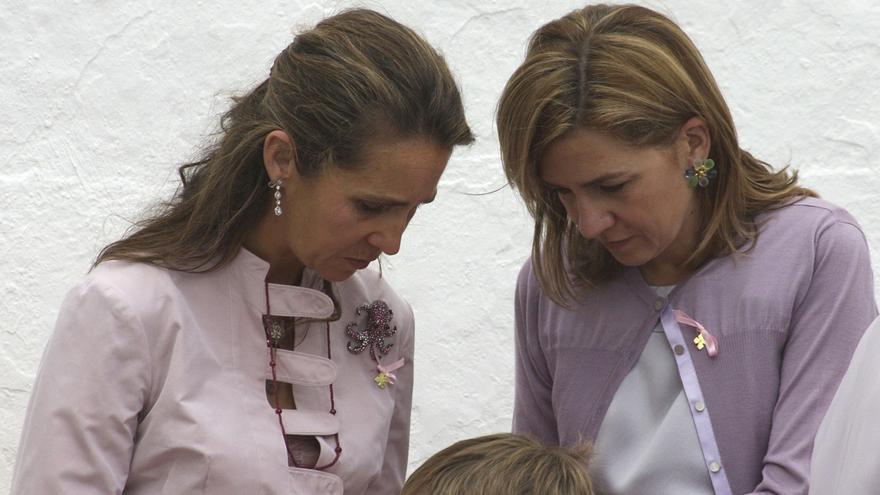 They say that they were vaccinated to get a health passport that allows them to travel regularly to Abu Dhabi to visit Juan Carlos I. Given the scandal of his immunization in the Emirates, the infantas Elena and Cristina de Borbón have issued a joint statement in which they recognize: “We have come to visit our father and, in order to have a health passport that would allow us to do it regularly, we were offered the possibility of getting vaccinated, to which we agreed.”

Elena, 57, and Cristina, 55, affirm that, “if not for this circumstance”, they would have agreed to the vaccination shift in Spain when “it would have been their duty”. The sisters are not included in any risk group nor do they work in any essential profession so, had they not injected the serum in the Emirates, they should still have waited several weeks to be immunized.

33,000 euros in allowances, in charge of the Interior

The infantas’ trip to Abu Dhabi to get vaccinated against the coronavirus earlier than their share will cost the public coffers 33,000 euros. As you advance this Wednesday Online Policy, the Ministry of the Interior took charge of the diets of the three bodyguards who accompanied each of the sisters of King Felipe VI during their visit to the emeritus Juan Carlos I, accompanied by the former director of the CNI Félix Sanz Roldán, in which they took the opportunity to do also health tourism.

According to this medium, which cites sources in direct contact with the usual escort services of the Royal Household, the emoluments of the security person do not vary if they have to travel abroad, but if they receive travel allowances. In this case, the item corresponding to the six escorts that accompanied the infantas would amount to a total of 33,000 euros.

Elena and Cristina flew on the weekend of February 6-7, according to El Confidencial on Tuesday, and returned to Spain, already vaccinated, on February 13-14. Casa Real was unmarked yesterday from this fact, ensuring that both King Felipe, Queen Letizia and their two daughters will be vaccinated when they are due according to the protocols established for the vaccination campaign.

This same Wednesday, the second vice president of the Government, Pablo Iglesias, has affirmed that “Spanish society does not accept that members of the Royal House are vaccinated against the coronavirus in Abu Dhabi.” “There is a debate about the usefulness of the monarchy that is growing every time that from the Royal House itself they offer new scandals that produce enormous indignation in a very important part of society,” he said. Precisely, the vaccination scandal comes a few days after the emeritus king regularized more than 4 million euros with the Spanish Treasury, without any prior inspection or requirement.

Emirates, the back door for wealthy citizens

The United Arab Emirates (UAE) is the second country in the world with the most administered doses of the COVID-19 vaccine per 100 inhabitants (60.95), only behind Israel (94.87) and practically double that third on the list, UK. The Arab country has also become the back door for wealthy citizens from all over the world to go there to get vaccinated, as the infantas Elena and Cristina have done.

“The United Arab Emirates is offering the vaccine to its citizens and residents for free and optional after ensuring that the person does not have symptoms or diseases that make it inadvisable”, says the Emirates Ministry of Health on its website. The country has four approved vaccines: Sinopharm (China), Pfizer-BioNTech, Sputnik V, and Oxford / AstraZeneca. In this way, The UAE embassy in Spain has confirmed La Sexta that it is not legal for foreigners to travel to the country and pay to get vaccinated, since it is only available to nationals and residents.

However, an exclusive and elitist London club, the Knightsbridge Circle, claims that it has reached an agreement with the Emirati authorities to offer the Sinopharm vaccine to its members, who pay a fee of 29,000 euros per year, as part of a strategy to “attract tourism to the area”, as reported by The Guardian. “These tourists are offered the Sinopharm vaccine,” said the club’s spokesman.

The club’s founder, Stuart McNeill, told The New York Times that since the tourist vaccination offer was made public, the club has received more than 2,000 new applications and “several private jet companies” have contacted the club to transport customers.