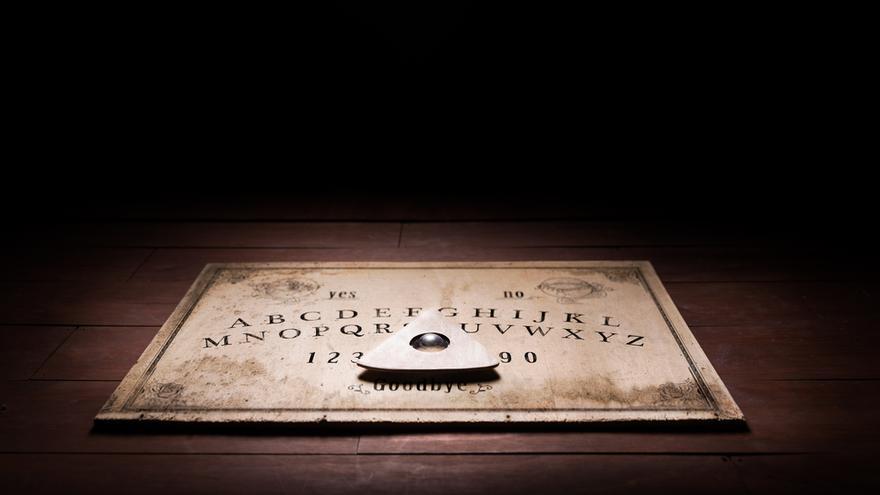 Back in 1984, Peter, Ray, Egon and Winston sneaked into the homes of millions of people and planted a seed that continues to germinate even today. They were scientists at Columbia University, but they did not study physics or mathematics. His field of research was, so to speak, less tangible. Although for many they were the first, not only the Ghostbusters awakened the interest in the paranomalAfter them, countless fictional characters would arrive who strove to find an explanation for everything that escapes human understanding. ‘The Orphanage’, ‘The sixth sense’ or ‘The Exorcist’ are just some examples. And it is that, leaving aside the fictional elements of Hollywood brand, find people who dedicate their lives to the study of the paranormal it’s not that strange. The fascination for inexplicable phenomena is an intrinsic motivation in the human race, and that is where parapsychology and the profession of the parapsychologist are born.

An image from the original ‘Ghostbusters’ tape.

Far from the image that has been projected over the years of those who dedicate themselves to studying inexplicable a priori phenomena, the truth is that parapsychology is far removed from witchcraft, candle magic, tarot or miraculous cures. However, it is enough to take a mere glance on the Internet to see how so-called witches and seers promote themselves under this badge and whose professionalism is doubtful at best. “The work of the parapsychologist is to investigate supposed paranormal phenomena,” explains Professor Alejandro Parra, doctor of psychology and researcher in parapsychology, and one of the few professionals in Argentina who studies this subject. “The paranormal character attributed to them is not related to the anomalous sense, although we assume that moods facilitate the appearance of certain of these phenomena”, He specifies.

Alejandro Parra’s relationship with the paranormal comes from his adolescence and an experience he experienced on his own flesh. Even today he remembers what he experienced during a session of ‘The Cup Game’, known in Spain as the Ouija board. “My partner and I were the only witnesses of how that cup moved about a foot without physical contact any. I couldn’t find an explanation for this phenomenon, even though I made sure that there was no manipulation at all, ”he recalls. It was his first contact with the paranormal, a science in which he was trained later and that has not stopped surprising him as the years have passed. “Paranormal experiences are anomalous not because they are unusual in the population, but because the hypothesis of the existence of a non-measurable type of interaction between organisms and their environment seems to contradict the space-time and energetic construct“, Explain.

From Spain, Antonio Pastor, president of the National Society of Parapsychology TCI, affirms that it is about a very vocational trade. “Since I was little I was intrigued to know what those ‘strange phenomena’ were that people talked about so much and, above all, I rambled between the possible hypotheses that gave them an explanation,” he says. And now he dedicates himself to it, although he regrets that it is a “very intense, even exhausting” task that is not remunerated: “We carry out all the studies nonprofit”, He emphasizes. “On many occasions we have to travel to other provinces to carry out investigations that last for months, even years, and that in some cases are not fruitful because in many cases we find ourselves with ephemeral, sporadic and spontaneous phenomena“, bill.

But what exactly is the job of a parapsychologist? “We control at all times the physical constants of the place to verify possible alterations and we investigated based on all the methods discovered in the field of instrumental transcommunication to try to capture this supposed communication with this intelligent factor ”, he indicates. This is also explained by Alejandro Parra, “the purpose is to evaluate the varieties of transpersonal, spiritual and paranormal experiences and integrate their findings into theory, research, education and clinical practice.”

That is why experiencing these inexplicable phenomena is not common even for professionals in parapsychology. “I have been researching and experiencing these kinds of places and experiences for more than 20 years and I have not been lucky enough to experience many events that break any logic,” explains Antonio Pastor, who does remember one of them with particular clarity. The atmosphere could not be more appropriate: the Gálvez Crypt, located in a small town in Malaga, a place where he has been investigating for more than a decade. “We were conducting a temperature check in the middle of the morning and suddenly we started to feel cold. The area was delimited by motion sensors and the access had a laser barrier, so anything that could penetrate the area would be detected”, He says, and continues his story:“ At that moment I activate the portable temperature meter and I realize that in eight seconds the temperature had dropped 12 degrees, a phenomenon known as thermogenesis. At that moment the motion sensors jumped, they were altered by something invisible to our eyes ”.

The Crypt of the Gálvez, in Malaga.

Although it seems like a closed world, Antonio Pastor considers outreach work is important to bring parapsychology closer to the population. For this reason, the association he directs organizes ‘mysterious routes’ in various places in Spain. “These routes are a great opportunity to reach all those who want to share this experience with us. In them we not only make the story known, but also we bring attendees to the world of mystery. On many occasions, if we have all the permits, we have entered places marked by the unusual, ”he explains.

In another sense, Alejandro Parra is proud of the work carried out by the Institute of Paranormal Psychology, which was inaugurated in 1994. “The professional practice of parapsychology lacks registration, since there are no professional associations and the profession is not regulated ”, he laments.

The challenge of training

For this reason, it is very difficult to find subjects on parapsychology in the academic curricula of current universities, although there are some centers in Europe and the United States (Edinburgh, Saint Petersburg or Virginia are included in this list) that include this subject. “In our country we can only carry out the distance studies or being self-taught and learn from great works published over many years on this subject ”, laments Antonio Pastor, who asks for more recognition for a practice that he says is recognized by Unesco.