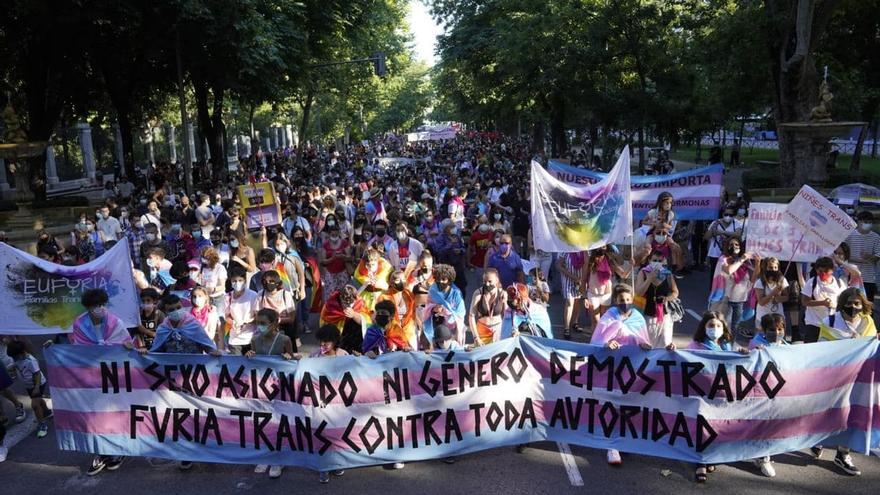 As every year for 15 years, the other Pride, the alternative, does not miss the appointment in the streets of Madrid. Critical Pride is once again on June 28, making the protest coincide with the day that 50 years ago the Stonewall Inn riots, in New York, inaugurated the LGTBI liberation movement. And this time, after more than a year of restrictions due to the pandemic and just before the approval of the Trans Law, which will be merged with the LGTBI, there was more desire than ever to take to the streets. “Beyond the speeches of love and desire we want to be, be and exist without fear,” protesters claim in a march loaded with a festive and vindictive tone, where the most popular slogan is “Trans Law now.”

Under the slogan “Neither assigned sex, nor proven gender, trans fury against all authority”, the protest has left Atocha after 7:00 p.m. to, among other things, demand more ambitious legislation than the one that the Council of Ministers will approve this Tuesday 29. “He does not represent us,” they cry out. They ask that the norm recognize gender self-determination also of minors –the law does it from 14, and between 12 and 14 a judge must authorize it– or non-binary people, who are not named in the text. They are against the “assignment of a sex anchored in binaryism as soon as they are born” and defend “the self-determination of our bodies and our lives beyond any authority, party, group or institution”, they wield in the manifesto.

“Here is the trans resistance” or “Pride is not for sale” are some of the slogans that many protesters shout, with a special abundance of young people, as they advance through Madrid’s Paseo Del Prado. Rainbow, trans or bisexual flags fill the march with color and vindication, to which dozens of collectives and different blocks put a voice and face, from the Bollero to the Racialized Bloc or that of non-binary people. A large trans flag occupies the head of the demonstration, in which there is a space reserved for the associations of families of trans minors.

It is the first time that 18-year-old Kuma has attended the protest. This young trans woman has come alone, but admits that “it is very comfortable to be in a space where you can be yourself and not feel bad,” she explains. It is what he claims and what he cannot find at home, with his family, who still do not recognize his identity: “They continue to treat me in masculine terms and for me that is very hard, that your parents and in your home, where they you must be sure, they do not accept you, it is not easy “.

The same, being able to live “without being tutored”, is what Maribel claims, already a veteran of Critical Pride. She celebrates that tomorrow the Government approves a norm that ensures gender self-determination for people like her, who had to wait almost four years to see her identity reflected in her ID, in addition to “going through doctors and psychologists who prove what I said” . The process, he says, is “degrading” because “it involves a third person guarding us, and giving the go-ahead or certifying who we are.” Even so, he regrets that the rule does not contemplate minors of any age or non-binary people. “Perhaps for wanting to reach Pride with the approved law, things have been left out,” he believes.

“Almeida, tacky, take out the flag,” shouted the audience as they passed through the Plaza de Cibeles, the seat of the City Council of the capital. This year the city government, in the hands of the PP and Citizens, has renounced hanging the LGTBI flag, but under the façade without rainbows, the fabrics that the protesters wave stand out. Among them is Yolanda Cosgaya, who wears the LGTBI flag tied to her hip and the bisexual one around her neck. Also two masks, one under the other, with the same colors. Vocal of culture and education of the LGTBI collective of Madrid COGAM, Yolanda assures that bisexual people continue to face “invisibility”, both inside and outside the group, which implies “having to constantly come out of the closet”: “When you are with a boy is read to you as heterosexual and when you are with a girl as a lesbian. It’s okay, we have to assume that there are a lot of grays and diversity in which we are people, “she explains while moving forward with her collective companions.

Criticisms of the Aliens Law, the Aliens Internment Centers (CIE) or “structural” racism also feature prominently in the march. “Papers for all or all without papers” or “open the borders, we want more dumplings,” shout the members of the Bollero Block, who have focused attention at one point during the march by launching several canisters of smoke. With another of the groups, the Racialized Bloc, march Yirka and Saviya, who denounce “the invisibility” that non-white LGTBI people face. And a consequence or example of this, says Saviya, is that “we are very few within the block.

Attendance at Critical Pride has been overwhelming, comparable to the numbers of protesters in calls prior to the pandemic. It is from 2017, with the celebration of World Pride in Madrid, that this more political and diverse event becomes massive with the intention of standing up to the massive call.

Critical Pride does not stop in Madrid. In spite of the rain, thousands of people have taken to the streets in Bilbao, also with a special defense of trans people, where slogans such as “LGTBphobos out of Congress” or “Without trans women there is no Pride” have been heard. The critical LGTBI collective from Murcia has taken to the streets on two consecutive days, first forming a critical bloc in Sunday’s demonstration and with its own call this Monday.

There are many demands that they raise, but above all they want to “sound the demands of all the dissidents” and put the focus on ensuring that LGTBI struggles are not blinded to discrimination other than those motivated by sexual orientation or gender identity. As every year, they regret what they consider a “capitalist and interested” drift of MADO, the official protest next Saturday that several groups with the participation of companies call, and they claim the expression of diversity: source of income, here we are the various criticisms “, they emphasize.