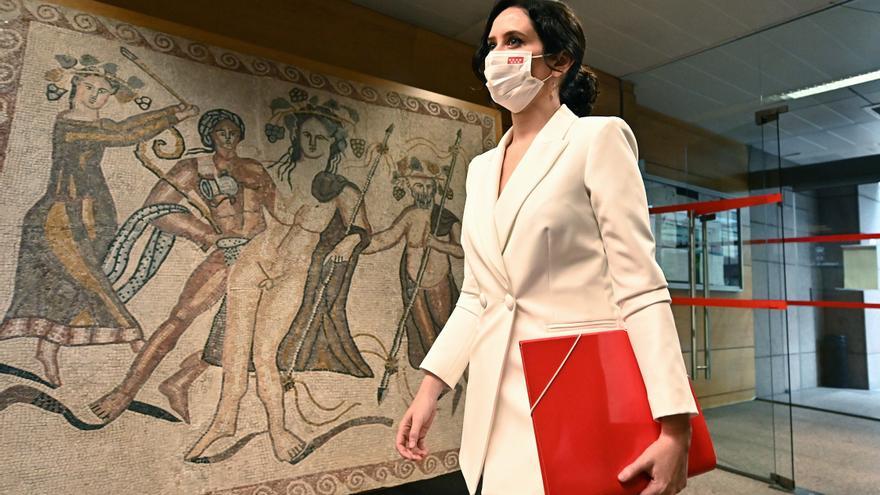 The exacerbated Madrilenianism suffered a severe blow this Thursday with the news that Sergio Ramos is leaving Real Madrid. It is time to review the album of stickers and the iconography of the great military feats. Social idols are being replaced by others over time, but there is always the risk of losing testosterone production capacity. At the expense of future sports signings, Madrid politics aspires to fill that void with Isabel Díaz Ayuso and hence undertake the reconquest of Spain, the world and everything that is beyond.

Posts to pull anti-feminist testosterone, Díaz Ayuso played in his inauguration speech the melody that sounds best in the ears of the voters and leaders of Vox. The great success achieved at the May polls contrasts with the failure of the previous legislature in which a budget could not be approved. To solve this lack, it is not enough for the acting president to be re-elected with the votes of the extreme right party, which is already guaranteed, but to mark the way to have a stable pact that allows her to govern.

Never before have voters so clearly revalidated a government that had done so little. Díaz Ayuso seems determined that this situation should not be repeated.

Hence, Ayuso denounced “the false trick of feminism.” It is no longer a question of adding the adjective ‘liberal’ to avoid having to adopt the more left-wing content of feminist organizations. You have to make an amendment to the whole to mark it as unnecessary or even counterproductive. Or, as he also said, defend “true feminism” with a meaning that they can digest in Vox without choking: “True feminism is to help women of all ages, whatever their life project, not to confront them with men. “. What I always say, Rocío Monasterio will think.

That intention was made clear in one of the main promises heard in the speech. Women under the age of 30 they will receive an aid of 500 euros per month from the fifth month of pregnancy until the child is two years old. The objective is to reverse a trend of continued decline in the birth rate that has occurred in Spain for many years. “The demographic winter is here. In 2019, 56,000 children were born in the Community of Madrid, 24,000 fewer than in 2008. A country with a future needs at least twice as many births.”

The promise has an asterisk added to it that we could call ‘the Vox amendment’. To receive the aid, these women must have been registered in Madrid for at least ten years. In practice, women of foreign origin and even those who come from other Spanish regions are excluded. The need to please the xenophobic ideas of the extreme right is carried out by Andalusians, Galicians and Valencians. Madrid welcomes with open arms all those who come from abroad, but when it comes to supporting women who have children, the money is reserved for the authentic Madrilenians. Identitarian natalism that if approved in communities governed by nationalist parties would cause rivers of indignation in the Madrid press. The word ‘supremacism’ would appear in a few headlines.

The problem of the decrease in the birth rate is real and profound all over the planet. It is almost a structural phenomenon that is not limited to the rich countries of Europe. In fact, it is repeated all over the world, with the exception of Africa, confirming a well-known idea: the contraceptive method with the most persistent effects is economic development. As it has to do with multiple factors, not only those derived from the lack of income with which to support a family, governments have it difficult to turn it around, but at least they can approve measures such as those announced by Ayuso. Births fell in China in 2020 18% to the lowest point since 1961. The fertility rate in the US has dropped to the lowest since 1979.

Germany has been adopting aid policies for pregnant women since 2005 and this has allowed it to abandon its positions in the queue in Europe. Still, the increase has not been spectacular. The fertility rate has reached 1.54 children per woman of childbearing age from 1.3 in 2006.

It is unlikely that in the face of this global trend, the measures that carry the notice of reserved the right of admission will be very effective. More children, but if they come from our mothers, not from those who come from other parts of the world. Regardless of the ideological connotation, it is a partial solution that does not measure up to the seriousness of the problem.

For the fight against climate change and pollution, Díaz Ayuso tried a similar style in his speech. Ecology, yes, but within an order, painless, that does not force us to change our habits. We want to do the same as always, but polluting less in a miraculous way. “The left has been using ecology as an excuse to increase prohibitions, raise taxes and flag a brake on progress,” he said. Ayuso does not want “prohibitions” – that would attack our right to pollute – and turns the denial of reality into the opposite. “I don’t want superstitions or ideologies. I want coherent decisions,” he presumed, as if his ideas did not come from an ideology.

Comparing scientific advice to superstitions is the kind of admonition Galileo must have heard from his accusers. Apparently, there are ideas that do not go out of style for many centuries that have passed.

‘The Crown’ and ‘Ted Lasso’ triumph at the Emmy Awards