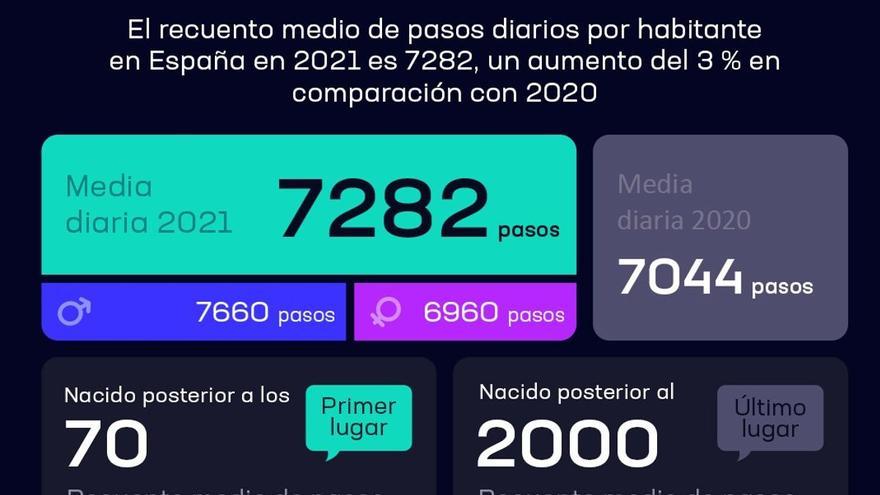 The professional brand of 'wearables' for digital wellness management, Zepp Health, has just published its 2021 report on the health of users, which contains the main conclusions derived from data from around 30 million people around the world in the last twelve months, obtained through Amazfit smart devices.

The results have been processed using the technique of data masking to protect the privacy of personal information. These include daily steps, sleep quality, BMI, exercise, and stress level. To put the state of health globally into perspective, the report compares these metrics across five countries, including the United States, Spain, Italy, China and Russia. At a general level, the results of the study show that users around the world do not seem to have fully recovered from their usual exercise patterns before the restrictions of the pandemic.

Our country is the country that takes the most steps per day, with an average distance of almost 5 km compared to the US, which only reaches 3.3 km on average daily.

The report reveals that our daily step count is 7,282 steps on average, an increase of 3% compared to the year of the pandemic. Being a much more present habit in older people. And it is the young people who walk the least daily, with an average number of steps that drops to 6,495 steps daily.

The data for our country show that all age groups sleep an average of 7 hours a day, which increases as age decreases, with young people sleeping the most hours a day. Compared to the year 2020, the number of days in which the average 7 hours were reached decreased in all groups. The study concludes that the quality of sleep has decreased by 5% today.

Another of the indicators analyzed is the resting heart rate (RHR). This measures the heart beats per minute while the body is at rest. The report suggests that users with medium stress levels tend to see increased RHR and decreased sleep results. These metrics are useful for informing users about the health risks associated with excessive stress and poor sleep quality.

The report indicates that users in Spain have seen their stress level increase by 8%.

The most active men

The number of people who exercise more than once a week compared to the previous year increased, reaching 15.5% of the population. It is slightly higher in men than in women, 17.6% compared to 13.7%, and is higher in intermediate age groups that exceed 17% of the population of these ages. While among the youngest in the country and the oldest, the percentages fall below 15%.