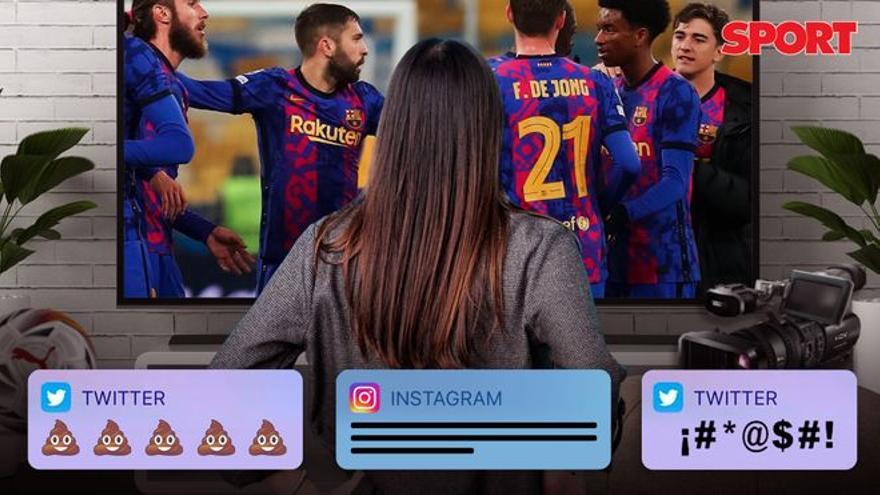 Lack of respect, vexations, insults and even threats. This is what we sports journalists suffer every day in a world that unfortunately continues to be ‘men’s’. Or, as you define it Gemma Herrero (RAC1), “a kind of sanctuary where women we are not welcome. ”

Of greater or lesser severity, with more or less frequency, and either in public comments or by private messages, the majority of journalists sports we suffer this harassment. “We all receive insults, but we will always have one more point of complaint; they do not criticize what we say, but they do it because we are a woman,” she explains. Laia bonals (ARA).

“I have never received such serious comments, but I have received evaluations about my physique, and it is not necessary,” he explains Andrea Gines (Movistar). “It is the feeling of having to constantly show that we are worth,” he says. Helena Condis (COPE), “as if we had to always be passing an exam” (Marta Ramon), “as if we had to be superwomen” (Laia bonals). “And behind our opinion there is a mind; not a physicist or a gender,” he reasons. Carla garcia (Barça TV).

“Apart from various insults and the classics of sending me to the kitchen and washing up,” he denounces River dove (TVE), “the most serious thing I have experienced was a death threat that I immediately denounced to the National Police; he did it so boldly that he published it openly and did not delete it. ” Carme Barceló (Chiringuito) received a serious threat: “I didn’t make it public at the time because the inspector recommended it to me, but I have a lot of respect for the comrades who do it. This is just a reflection of today’s society.”

“Once they posted a part of my article about the end of the Champions Come in Real Madrid and Athletic“, says Gemma Herrero,” and the level of aggressiveness and verbal violence that I received was very strong, I didn’t have time to erase all the comments. “” My personality has been impersonated recently, I suppose to discredit me, “she says Monica Marchante (Movistar), “they have sent me to wash, they have called me ‘old lady’, as if that were a problem.”

Some of us choose to report; others, by ignoring and blocking. “The solutions they give you is to ignore it, as if it were we who have thin skin. And it is not like that. It is that we do not stop receiving very hard attacks day in and day out also for the simple fact of being a woman”, Gemma Herrero explains. And he adds: “Even some colleagues make it appear that they do not listen to us or call us exaggerated instead of standing by our side.” “I got to erase myself from the networks for a while,” he confesses Chantal reyes (Mundo Deportivo), “not because of the harassment itself, but because of the mental saturation of having to read certain comments and wanting a time disconnected from the pressure and demands that it entails.”

But this also happens in the real world. “Goes beyond Twitter“, points Elena de Diego (SER), “happens on the street, in stadiums, at work and they are also comments from acquaintances.” And adds Laia bonals: “That is much harder and it is important to say it.”

Machismo and lack of education

Behind all this harassment, a common denominator: the sexism. “They do not conceive of us as subjects to listen, value or imitate,” he says. Marta Ramon, “They do not consider us equal or give us any credibility or authority.”

“As a sports journalist,” he explains Sandra S. Riquelme (El Patio), I have detected two types of machismo: “First, the involuntary one, which is internalized in many people. They are still surprised that I can know what a lane or the system of five in defense is; And then there is the pure machismo of ‘this chick what is she going to tell me if she has no idea’ “.

For Sara gimenez (Come on), the underlying problem is also “the impunity that people feel in the networks, as well as the ignorance of a part of the society who continues to be a macho and to whom it is impossible to imagine that a woman can speak well of a man without wanting anything in return “.

Can it be eradicated? “It’s very complicated” they all answer. “It is something that has been deeply rooted in our society for many years,” says Chantal Reyes. Time, generation change and education. Much education, in respect, from the childhood. “Also, that the media themselves begin to value the sports journalist for her work and not for being a woman and meeting quotas,” adds Anaïs Martí. And, Marta Ramon sentenced, that “our colleagues react as allies, denounce and stand on our side.”