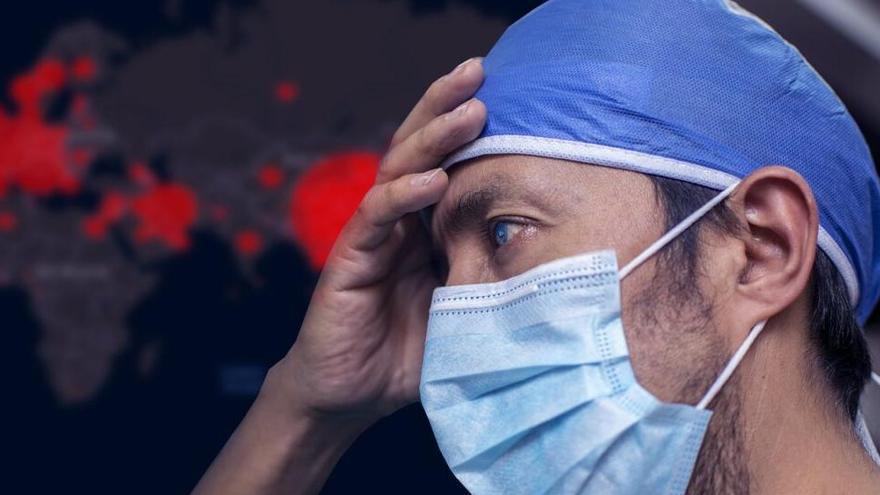 It may interest you: 'Coronavirus: what are we doing so wrong?'

We already have a million deaths from coronavirus in the world, and many, too many people continue to speak of deception and continue not to believe that this is serious and that if we don't do things right, our friends, family members or ordinary fellow citizens who deserved to stay alive and who we have put at risk by not following the advice of scientists will continue to die.

But what if you want rice. Thousands of Protesters filled this Saturday, like the previous one, the well-known London square of Trafalgar Square to protest against the measures restrictive British government.

You can listen to our podcast, receive a weekly newsletter with the news, write comments, send questions ...

And the same is happening in capitals such as Berlin, Brussels, Dublin and Paris, where thousands of people gathered to denounce that the pandemic is a hoax.

They are conspiracy theories that we have been listening to for a long time and with which it seems that not even dramatic reality can.

Because the world has been filled with stories that seem to be born, grow and develop like a charm on social networks like Facebook, and in which they are alerted to such surprising things as with the vaccine they will install a microchip to keep us under control, or that SARS-CoV-2 is a biological weapon, it is not very well known whether from the Chinese or the Americans, or that the confinements are only a tool of oppression by of governments to keep us still, submissive and silent, or that the fault of everything is 5G ...

And so we are attending the ceremony of suspicion that has the danger that hundreds of thousands of people may refuse to be vaccinated, with the consequent risk that this entails for others.

The last of the deniers goes in masks and it's just as amazing as many others. It turns out that they have proof of the ineffectiveness of masks and the deception they pose to the population:

- "A mask cannot prevent the spread of the coronavirus when it is not even able to prevent us from picking up the smell of flatulence”.

It is one more statement of the many that are said, and that is added to those of “it does not let me breathe. It is uncomfortable. My glasses are fogging up. It makes me very hot. I seem to be drowning. It looks horrible ... "
And they let so quiet.

So let's try to explain something as simple as the difference between a virus like SARS-CoV-2 and, excuse me, a fart.

And we are not going to talk about special masks, such as those designed for biological warfare that we have seen the military wear so many times in science fiction films.

Let's refer to a surgical mask (The blue ones worn by the vast majority of the population, although they can also be white and other colors), and even some made of fabric, provided they meet the requirements.

To begin with, although it is already well known, let's remember that With this type of mask what we seek is to prevent whoever wears it from infecting others, and not that he is infected. Although they also provide protection for the user.

We know that contagion is produced by flugge drops, which are the droplets of saliva that we expel when talking, breathing, singing, shouting ... and that if a person is infected, even if they do not know it, when they leave their mouth they are loaded with viruses and carry it directly to other people, or leave it in the environment (aerosols), or They are deposited on a surface, so that another collects it with serious risk of contagion.

Well fair what these types of masks do is stop those droplets. And this translates into a very, very important reduction in the transmission of the virus.

Understood this, we do not want to stop saying that wearing it with the nose in the air, or on the chin, or on the elbow, is idiotic of people who also prove to be very unsupportive and who think very little of others.

It may interest you: 'Some behavioral tips to prevent coronavirus and other diseases'

Experiment that you can do at home

But let's go back to the 'last cry' of the deniers and their claim about the uselessness of the mask: "They can't stop you from getting infected if they don't stop you from smelling a windy thing".

The scientific answer to dismantle this claim is simple and easily understandable. We will give it later.

But the easiest is a empirical demonstration that everyone can do at home. Just to get it through your eyes.

- Put on the surgical mask and try to blow out a match blowing through it. No matter how close it gets, and even if the flame may move a little, it won't extinguish it.
- Do the same with a ffp2 or KN95 mask and you will see that the flame is not even aware of your efforts.
- Even if you blow with a fabric mask, approved, the flame will not flinch
- Now do the same with a 100% cotton fabric T-shirt, or a garment of underwear with the same composition, and you will see how the match goes out.
- And you can also do the experiment with a cowboy pants. You will see the flame go out or at least move quite a bit, depending on its strength in the lungs.

Also, if you have ever done the experiment of putting a lighter or a lit match at the exit of a flatulence, with your pants on, you will see how the gas arrives and even ignites. Although better not to do so, your pants are not going to catch fire.

It is nothing more than a homemade and visual experiment, without pretense.

It may interest you: 'If the serological test says that I have antibodies, are I no longer contagious or do they infect me?'

The scientific explanation is even simpler. A fart, or flatulence, which sounds thinner, is basically an intestinal 'gas' produced by our stomach and that goes out.

If we were to analyze it, we would see that it is made up of many different things. But if we focus only on the things we can smell, the main thing is methane (CH4) with sulfur dioxide (SO2). A molecule that 'carries' one atom of sulfur with two of oxygen. Very similar to a water molecule (H2O) but larger.

Of course we cannot see its size because we do not have microscopic glasses. But it only takes a little culture to understand the barbarity of the 'last cry' of the deniers.

No mask has the ability to stop odors, because to achieve this they would have to stop other molecules of a similar size, such as oxygen. And then we would drown.

For example, the atomic diameters of hydrogen, carbon, or sulfur are respectively 53, 140, and 200 picometers. That of methane is 380 picometers and that of sulfur dioxide is 360 picometers. If we measured SARS-CoV-2 in picometers, it would have 140,000.

But that comparison falls short, because it should be remembered that total size (volume) depends on cube of length. To understand it, the size of a person who measures 1.80 meters, for example, is not a thin line of 180 centimeters, but his whole body, with the volume that he has.

Definitely a coronavirus is very small. But it is about 150 million times larger than an atom like sulfur. And it does not fit in the same places.

In this way we could dismantle so many nonsensical claims that we are hearing about the coronavirus.