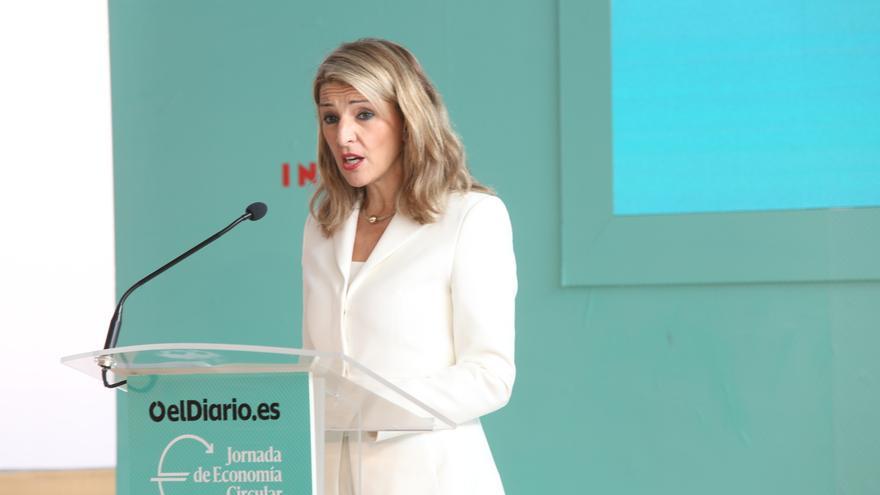 “We cannot put off discussions forever. Steps must be taken now.” With this strong message, the Second Vice President of the Government, and Minister of Labor, Yolanda Díaz, inaugurated this Monday elDiario.es conference on circular economy, in which he has called for the promotion of this economic model based on sustainability, reuse and care of natural resources and “social justice”. Díaz has set out to address this transformation and “enormous challenge” from knowledge, with a strengthening and modernization of Public Administrations so that the State is “entrepreneurial” and can accompany society and the private sector in this transformation.

The circular economy is spreading to an increasing number of economic production sectors and consumer groups. It seeks maximum resource efficiency, feedback from production and marketing systems, and the positive end of the life cycle of products. To achieve this system, go from the current cycle of buy, use and throw away to a new one that is based on reuse and recycling.

The second vice president has defended that the circular economy offers a new vision of the economy that “is possible”, cleaner, which is necessary given challenges such as climate change. But, in addition, Yolanda Díaz, has stressed that this social and economic change not only offers a more ecologically sustainable alternative to the current model (based on use and disposal), but also offers economic opportunities for companies and work for citizens and citizens.

“The Action Plan for the Circular Economy adopted by the European Commission could create up to 700,000 new jobs,” he pointed out. The Labor Minister stressed that the circular economy is “more labor intensive” than the current linear system. “This is something very important,” he pointed out.

Yolanda Díaz has affirmed that the transition towards this circular economic model must be based on scientific evidence, on knowledge, with the premise of “leaving no one behind.”

“It is essential to understand these enormous changes that produce fears,” he acknowledged. “It is key that we have room for explanation and understanding, with the unions, the employers and society as a whole, to avoid causing rejection or fear.”

Díaz highlighted that studies by the public employment service (SEPE) already offer data “in recent years on the growth of employment in activities related to the environment and the three pillars of the Circular Economy: the elimination of waste and pollution. ; the lengthening of the time of use of products and materials; and the regeneration of the natural environment. This confirms a growing trend that we must support and promote, understand and root “.

Act now and with commitments

The vice president has urged to act and not postpone these debates as if they affect only the future. “I am very concerned about empty promises, also appeals to an eternally postponed tomorrow. This is already happening, we cannot postpone the debates forever. The steps have to be taken now,” Yolanda Díaz encouraged in her inaugural speech. “We need defined objectives and clear ambitions,” he stressed. “If we don’t, it won’t do any good.”

Díaz has argued that this transformation of the production model forces us to “rethink the role of governments in the economy.” The Minister of Labor has advocated a more active role for the State, with an “entrepreneurial” role and a “catalyst for change.”

To support this idea, Yolanda Díaz has referred to the work of the Italian economist Mariana Mazzucato, who argues that the “new state of the 21st century must go from ‘repair’ to ‘prepare.” “From intervening when it is too late, as criminal law does, to acting early to change everything and protect ourselves against risks,” he argued.

Díaz stressed that the coalition government has “sufficient imagination” to address these challenges. “As Raymond Williams put it, it’s about ‘making hope possible, not convincing despair.’