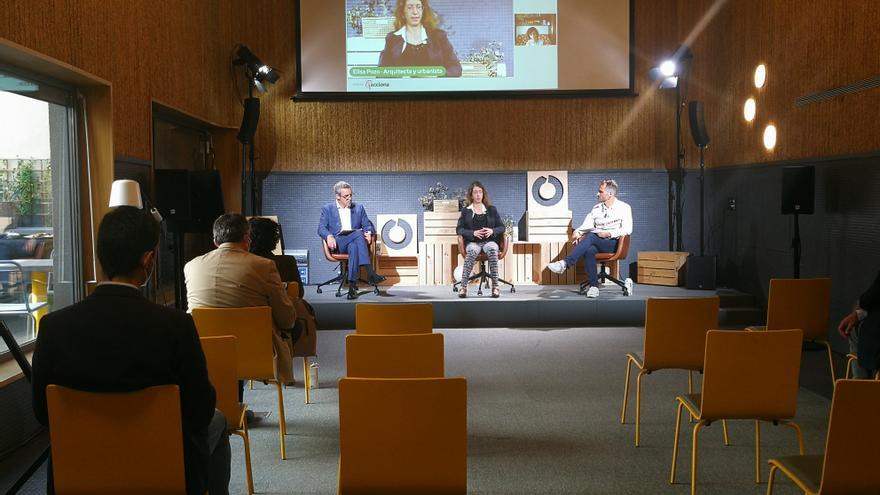 In a context of broad debates about the future of cities and the need to put life at the center, elDiario.es has organized this Wednesday a conversation about the transformative changes in mobility, the new paradigm of the sharing or the challenges of using urban space.

The objective of the event was to talk about some of the characteristics that a city must have to be sustainable, how we have advanced in this transformation in the last year, how the pandemic has affected cities, and what changes we must make in metropolises so that these are less hostile to its inhabitants.

To talk about this we have had the opinion of experts such as Elisa Pozo, architect, urban planner and researcher at the Polytechnic University of Madrid, Elena Hoyos Santamaría, manager of the European PE4TRANS project of the Valladolid Innovation and Economic Development Agency, and Antonio Roig, Acciona’s Construction Business Development Director.

Raúl Rejón, moderator and journalist of elDiario.es specialized in the environment, began the event by asking about the different aspects that these new sustainable cities can make up in the face of the threat of the climate crisis and how the distribution of public spaces will change and infrastructure. For Elisa Pozo, urban planning has great potential within this struggle, since “cities originate by reading the territories, radiation, prevailing winds, water, resources and the type of soil”, although due to rapid growth demographic of the last century, those principles have been lost to give place to a greater expansion less thoughtful and conscious. The key to solving it, according to the researcher, consists of “going back to bioclimatic design and adapting the different materials and spaces to this scenario of climate change and extreme temperatures.”

The past and future of cities

Antonio Roig insists that when analyzing what the cities of the future will be like, it is important to bear in mind that “in the 19th century, only 3% of the population lived in cities, while by the end of 2030 it is estimated that this will be the 60% “. Furthermore, “in the world there are more than 500 cities with more than one million inhabitants, and 74 of them already have more than five million”. This confirmation that “the future passes through large cities” forces us to think about the city in an integral way and “encourage collaborations between the private sector and the public administration”, in the opinion of the Acciona Construction Business Development Director.

For Elisa Pozo, this future involves taking into account environmental sustainability, but also the health of the population with measures such as “more spaces to walk and accessibility so that they are safe regardless of gender and age”, “more nature, to that this is not a specific factor that is sought on weekends, but something integrated into the day to day “and” more intergenerational meeting places to avoid unwanted loneliness and mental health problems “. There are numerous examples of cities that are carrying out similar initiatives, such as Paris, Copenhagen or Vancouver, but the urban planner insists that “each city has its potentialities” and it is necessary to take into account the differences between, for example, Mediterranean countries and Nordic countries. , or North American cities and Spanish cities.

The challenge of public transportation in the post-COVID era

Another of the great doubts is how the pandemic will affect the way in which we move, since, due to restrictions and fear of possible infections, public transport has not yet recovered the levels of use prior to the health crisis. Elena Hoyos considers that the coronavirus has done a lot of damage to collective transport, but it has also allowed us to reflect on what kind of transport we want, since being a deficit service it is not so important to think about recovering the same level of users as much as to think about how to improve performance. An alternative designed by PE4TRANS in the city of Valladolid is that of transport on demand after reaching an agreement with the University to establish a shuttle service designed through surveys and statistics that has helped to redefine the service.

Another project carried out in Valladolid to raise awareness in society is that of “Safe school paths”, to encourage children to walk to class when it is a short distance to educate them in such a way that when they are older they “do not have that dependence on the car “, since for Elena Hoyos,” training, education and awareness are fundamental “.

Antonio Roig considers that the trend is to continue “developing transport networks and combining them with each other with dissuasive parking and intermodal services” in order to ensure that users reach the conclusion that their use is more efficient than that of the private car. Given this, Elisa Pozo points out that “40% of daily mobility are trips of less than 5 kilometers that can be traveled on foot”, and insists that the change in consciousness necessary for the population to decide to use their vehicle less has to come “Not only of incentives, but also of penalties.”

The importance of data

When facing the challenge of proposing new measures and plans for large cities, one of the main tools available is data. Antonio Roig defends that thanks to big data, “the existing capacity can be confirmed with the new sources of mobility data through telephone companies or disaggregated GPS data respecting data protection laws”. This information is important since “until now infrastructures were planned based on origin and destination surveys, while now there is much more precise data that allows us to see mobility patterns that can be statistically disaggregated to explore solutions that had not been previously used. happened so far “. For Elena Hoyos, “data is essential for public administrations to make decisions and for private companies to establish new business models.”

Home renovation is another of the great challenges Spain faces to improve its performance and efficiency, as Antonio Roig pointed out, “in the state there are 25 million homes and 45% of them were built before of 1979, that is to say, when there was no law or technical code that demanded an isolation to the house “. This implies that “more than 70% of the housing stock in Spain has an energy certification lower than C”, and if we want to decarbonise cities, “we can talk about transport but the other pillar is housing.”

In Valladolid, Elena Hoyos explains that one of the solutions they are leading to change is “to rehabilitate entire neighborhoods to change gas boilers for biomass using the technique of district heating“and he insists that the most important thing for this to be carried out is” citizen commitment, explaining how the investment will work and what it means for them to rehabilitate their homes. ”

The challenge of renaturalizing urban spaces

Throughout the event, elDiario.es members could leave their questions and one of their main concerns was related to urban trees and the feeling that cities are increasingly using less vegetation in favor of open spaces covered with cement. . Given this, Elisa Pozo points out that “the vegetation in cities has to be biodiverse, with low-growing shrubs and landscaped areas”, since “the only and exclusive solution is not always a boulevard and the alignments of trees in the streets have to respond to water management and urban plans of the city in order to generate more pleasant spaces “.

Elena Pozo adds that renaturation is “one of the main measures applied to combat climate change” and “reduce the heat island effect”, although she also comments that the administrations have a maintenance problem, since this renaturation it requires care and needs that many local corporations cannot afford, which implies the obligation to look for new low-cost formulas. For Antonio Roig, an example of the actions that must continue to be carried out is “the action of Madrid Río and the sections of the parallel park that were missing”, since according to him we must focus on the fact that “a thousand trees consume 50 tons of CO2 per year and we must continue in this line “.