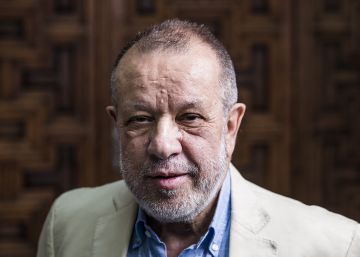 He quotes the French economist and demographer Alfred Sauvy to explain that economic crises differ from demographic ones in that the former act as dynamite, while the latter do so as termites. "However, both can demolish a building," says Francisco Fernández Marugán (Cáceres, 1946), acting Ombudsman. That is why this year, in the 2018 annual report, they have dedicated a special booklet to the topic.

Question: How would you define the demographic landscape?

Answer: It is very complex. The demography has been forgotten. Spain does not have defined measures like other European countries. The fertility rate has sunk. Instead we have one of the highest life expectancies in the world. It is a polarized situation.

Are we facing the perfect demographic storm?

We are facing a major problem. What to do? Reconciliation is a positive measure. Still women assume the main burden of work at home. But there is something else that is not done here: design a public services structure. Without it, it will be very difficult to recover fertility rates. We must address the educational issue, health, housing.

Is that what you mean when you recommend reviewing birth control policies?

It is that there are hardly any here. The Europeans have put in place different mechanisms. Here the answer is familiar. People believe that it is a matter of laws, but not only, of behaviors, of companies acting, of women ceasing to take on more tasks than men. There are fewer children because the salary and working conditions are quite deficient.

And there has also been a cultural change, fecundity is also low in countries around us.

Yes, it is evident. But it is a complicated issue. People do not have more than two or three children. They should be encouraged to have more, but that requires attention to public services, families … You can not afford not to have children because of housing or work problems … you have to build a more humane society.

So defend that cultural change is fought so that you will want to have children again?

Yes. It would be desirable. Although it is complicated. The ideal models are the Nordics. The least ideal, some Latinos, like us. We must look for a set of mechanisms to begin to turn the situation around.

Do you have those mechanisms identified?

I think it's not up to me to identify them. There are sketches in the report, but we work for the Courts, we make the diagnosis and it is up to them to establish a suitable vademecum. There is always a moment when one says "up to here". I think it has arrived.

Do you see fertility rebound after years of decline?

There are people who will tell me, and it will not be wrong, that we are resorting to mechanisms that have declined in the countries of central or northern Europe, which have gone ahead. But it is that we have not even made the attempt to design policies to recover the birth rate. In this you have to use yourself well, it's a serious drama.

They point out that in the middle of the next decade there will already be imbalances in the system.

We already have problems without the generation of baby boom has retired. When he retires, things get complicated.

They aim to work more time.

There are roads, for example the Swedish model. But I prefer to focus on the diagnosis.

With a declining fertility rate and an upward life expectancy, are immigrants the hope?

The arrival of immigrants is the most important demographic phenomenon in the recent history of Spain. They are needed. Our society will progressively acquire levels of miscegenation. And I think it's good. In Spain we have maintained a very reasonable degree of coexistence in the last 20 years and there is no debate about the badness or kindness of the foreigner's presence. We are better than in other countries. In this area, society is much more calm than some political leaders.

What is it that they are asking the Cortes to resolve the tensions of the system?

First, to pay attention. This is not a problem to park it. Second, to make appropriate reforms, in public services, in benefits.

How is it explained that in a country that has a clear diagnosis, it has not addressed this issue?

Because they have been dedicated to other issues. It is difficult to answer. The truth is that it has not been addressed.

The report also describes the inequality between inland Spain and the coast.

People are going to Spain full and leaves the towns, where they have a problem of Internet, financial services, transport … You can not consent. I trust that institutions will be able to address it. Surely disappear City Councils. But I think that people are going to move and make demands.

What challenges does the country have ahead in health, care and dependence?

First, that these services do not come down. In addition, in terms of public policies there are three important issues. First, of aging and care. The recourse to family support, with different household structures 20 or 30 years ago, is now more complex. Normally the elderly pass to residences when their situation does not allow them to stay at home. You have to make an effort to capitalize, to professionalize, of attention to people, of inspection … Second, unwanted loneliness. More than four million people live alone, about two million of them are over 65. Here we do not have the organizational scheme of Great Britain (where there is a Ministry of Solitude), families resolve it, better or worse. The third element is the pension. We must ensure that they have the same intensity as before.

Are we facing a critical situation?

I think in a critical situation, no. But worrying yes. Neglect is not convenient, you have to show interest.