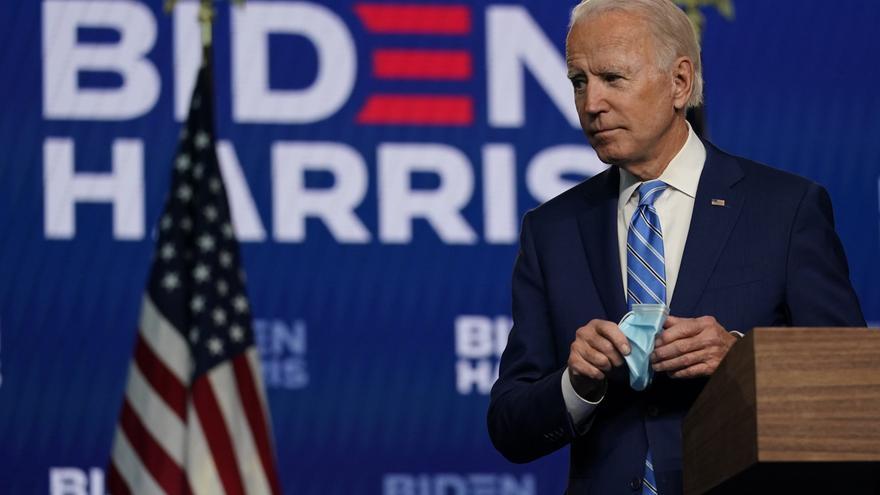 Joe Biden is very close to sitting in the oval office. The Democratic candidate gave a brief speech this Friday in which he once again asked citizens for calm and patience while finishing a vote that has lasted for more than three days. “We still do not have a final declaration of victory, but the numbers are clear. We are going to win this race,” he said. The former vice president’s campaign team had announced this intervention on Friday morning in what all the media considered a victory speech. However, throughout the day he has not been declared the winner in any of the states that remain to be decided and Biden, although he leads the scrutiny, has not yet reached the 270 delegates necessary to win the elections.

The former vice president has celebrated the rebuilding of the “blue wall” – traditionally Democratic states – with victories in Michigan, Wisconsin and possibly Pennsylvania, where Hillary Clinton fell in 2016. “There is a lot of tension, but we have to remain calm and patient while we count all the votes, “he said. “Democracy works and your vote will be counted. I don’t care how hard people try to get the opposite, I won’t let it happen.”

Before the announcement of Biden’s speech, President Trump has published a tweet in which he affirmed that “the legal processes have just begun” and that the Democrat should not proclaim himself president. “Biden should not unfairly declare himself president. I could also make that declaration,” he said. The current commander-in-chief has launched a legal offensive in several states to try to stop the count and reverse what looks like an inevitable Joe Biden victory.

“We have big disagreements and that is fine, they are inevitable and healthy in democracy. The purpose of our policy is not to fan the flames of conflict, but to solve problems. We may be opponents, but we are not enemies. We are Americans,” he said in a presidential tone speech, far from the oratory of a candidate.

Biden is petting the White House. His words come after a day in which he has managed to get ahead in the scrutiny in key states that are not yet decided such as Pennsylvania and Georgia. In these territories there are only a few tens of thousands of ballots to be counted corresponding to urban suburbs that tend to vote Democratic: Philadelphia and Pittsburgh in Pennsylvania and several counties of Atlanta in Georgia. The former vice president continues to lead in Arizona and Nevada.

The goal is to reach 270 delegates and the arithmetic is on your side. While some media such as CNN or New York Times still do not paint the state of Arizona blue –with 11 electoral votes–, others such as Fox News and Associated Press –referer in the projections during the US elections– yes, placing it with 264 delegates, only six to win the elections.

Trump has been talking about electoral fraud for months, drawing without evidence a panorama in which ballots with his name end up abandoned in rivers, in which postal service workers sell votes and in which people hide in rooms to sign ballots fraudulently. However, his offensive has increased as the ballot in key states progresses and Biden improves his position – Democrats are more in favor of using the vote by mail and these votes are usually the last to be tallied.

“If you count the legal votes, I have won easily,” he went on to say in a short speech from the White House on Thursday. “If you count the illegal votes, they can try to steal the elections from us.” Trump, who did not take questions and appeared crestfallen and with a colder tone, insisted on the existence of electoral fraud for Biden to win the presidency. The response from the television networks ABC, CBS and MSNBC was cut off his speech and emphasize that his words were false.

In addition to not acknowledging the results, the president has launched a major legal offensive – which began before election day – in several key states to try to stop the scrutiny. Their demands are mainly focused on two aspects: voting by mail and the access of ‘observers’ to the centers where the votes are counted. In Michigan and Georgia, justices have already rejected the Republicans’ demands. In Pennsylvania, the president’s campaign has featured two.

Part of Trump’s party is being outspoken against the president’s lies. The Republican Governor of Maryland, Larry Hogan, has responded to the president’s complaints without evidence, which have been accompanied by several lawsuits in different states, stating that “frivolous complaints to prolong this if there is no evidence are absolutely harmful to the country.” . Republican Brad Raffensperger, Georgia’s secretary of state and responsible for the scrutiny in this territory, has defended “that illegal votes are not being counted,” as Trump alleges.

What are the possible scenarios?

Biden is very close to becoming the next president of the United States, but the count has not yet been closed in several key states in which, yes, he leads Trump by several thousand votes. They are Georgia, Pennsylvania, Nevada, and Arizona.