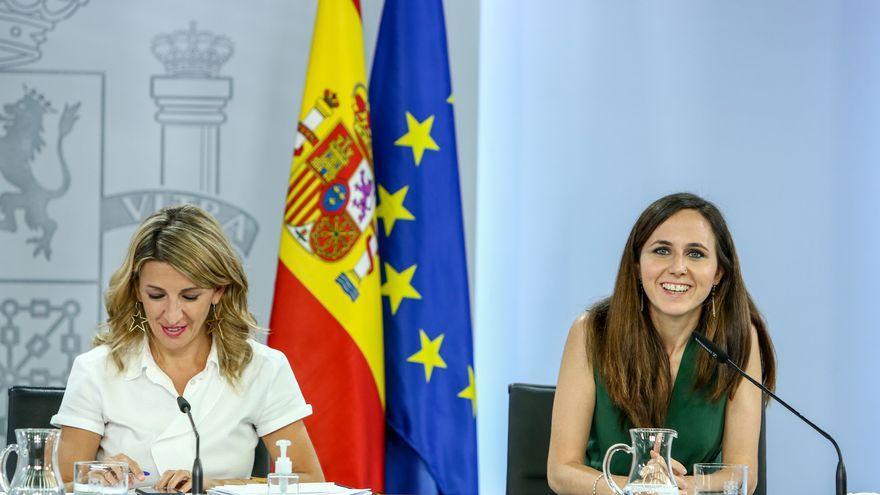 Next Saturday will start the pre-campaign of United We Can for the elections in Castilla y León. It will be in Valladolid, with an act in which the general secretary of Podemos, Ione Belarra, will participate. Confederal space face united for the first time autonomous elections in this region. Podemos and Izquierda Unida agreed to go to the polls jointly a few hours after the end of 2021. And already into the new year, it was specified that Pablo Fernández, secretary general of Podemos Castilla y León and national spokesman for the party, will be the politician who heads the candidacy.

The first polls that are being published predict that United We Can (UP) will obtain a result similar to that of the 2019 elections, when the two parties already suffered a hit: Fernández's formation obtained two attorneys and Izquierda Unida did not obtain representation. With this result, those of Belarra lost eight seats, compared to the support obtained in 2015, when they got ten representatives.

Two years ago, the only Podemos policy that won her seat the first time was Laura Domínguez from Burgos, who has already announced that she will not repeat in February. That of Pablo Fernández, national spokesman for the party and regional coordinator, was achieved by León days after of the votes thanks to the vote abroad and the count of some tables where errors had been observed.

On this occasion, Fernández will not attend for León and will be presented by Valladolid, the only province in which Podemos leaders take it for granted that the seat is assured. The surveys forecast that the result of UP can range between one and three attorneys. The survey carried out by Sigma Dos for The world places them in that fork. For its part, GAD3 gives them a seat, according to the barometer published by The North of Castile. This Monday Vozpópuli also published a survey, prepared by Hamalgama Métrica, which estimated that the confluence would maintain the two seats obtained in 2019.

United We can start the pre-campaign with the criticism of PP, Vox and a sector of the PSOE to the Minister of Consumption, Alberto Garzón. These attacks have been articulated around a shortened response from the minister in an interview with the British newspaper The Guardian, where the coordinator of Izquierda Unida encouraged eating less meat products and criticized the impact of intensive livestock farming on an environmental level.

This Monday, in an interview on Cadena Ser, the Prime Minister, Pedro Sánchez, joined in the reproaches. "I regret the statements because they have generated a controversy that is not commensurate with the reality of the sector," he added. In his response, Sánchez has avoided endorsing the IU leader, with whom he has not wanted to reveal if he has spoken since.

The criticisms have been directed to a paragraph of the minister regarding the macro-farms, on which he said that "they pollute the soil, they pollute the water and then they export this poor quality meat from these abused animals." However, as Garzón indicated, immediately before in that same interview, he had praised the extensive cattle ranching that - he described as environmentally sustainable - whose production has a lot of weight in several autonomous communities, including Castilla y León, reports Angel Villascusa.

The first politician to misrepresent The minister's statements were the president of the Junta de Castilla y León, Alfonso Fernández Mañueco, who in a Twitter message criticized the fact that the IU leader attacked "again" the farmers of Castilla y León and encouraged him to "rectify or resign". Podemos and Izquierda Unida defend that the controversy revolves around a "hoax created by the right and the extreme right" and argue that the PSOE "will have to answer" for its use.

In this electoral context, with crossfire between the parties, on Saturday the pre-campaign of United We can start, without having specified for now what the role of Yolanda Díaz will be. Along with Belarra this Saturday in Valladolid, only the presence of the parliamentary spokesperson of the federal leadership of IU, Enrique Santiago, and Juan López de Uralde, deputy of United We Can in Congress and coordinator of Alianza Verde, another of the formations that they participate in the coalition.

In Podemos. Alianza Verde and IU would like the presence of the vice president of the Government and the rest of the ministers of the confederal group in an event, a little later. “Yes we hope that Yolanda [Díaz] may be present and may intervene in an act or in a campaign rally ”, the national spokesman pointed out this Monday at a press conference.

When the electoral advance was made public, Fernández himself placed this call as "the first step of the broad front" that flag bearer Yolanda Díaz. However, from that moment on, from Díaz's team - which is not a member of IU or Podemos - they moved away from these claims.

The environment of the second vice president has insisted for a long time that her objective is the general elections of 2023 and they call at the beginning of this year to start the first stage, that they have called the listening process. With the first pre-campaign act already outlined, these same sources assure that for now "the role that Díaz will have in the United We Can campaign in Castilla y León has not been addressed".