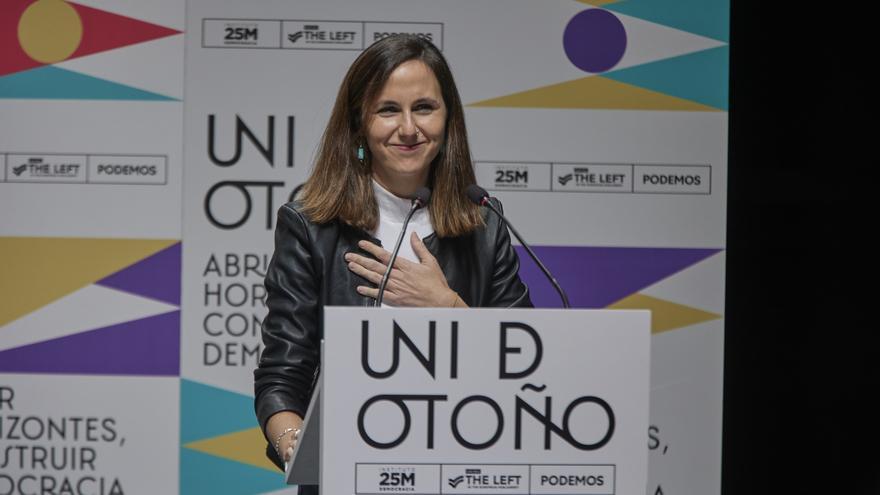 The organic machinery of Podemos faces its first internal process in the stage of Ione Belarra as the head of training. Asturias and the Balearic Islands begin this Monday the process of primaries for the regional secretariat of the party. In the island region, where they are part of the autonomous government, the national deputy Antonia Jover has already announced her candidacy. For their part, in Asturias two relevant figures of the formation have also announced that they will attend: Daniel Ripa, regional leader who has led the party since its emergence, and Sofía Castañón, member of the Belarra leadership, a deputy since 2015 and deputy spokesperson for United We Can in Congress.

With the march of Pablo Iglesias, Belarra’s team came to the General Secretariat with the expectation of “rooting” the party “even more in the territory” during “the next two years.” For this they are committed to working “from the municipal base in the neighborhoods, collecting and participating in the creation of neighborhood and sector proposals”, with their mind set on the next regional and municipal elections. In the face of these elections and the construction of convergent candidacies, the current leadership has valued relations with “sister political forces”, such as Izquierda Unida, En Comú Podem and Galicia en Comú, as stated in the political document with which the Minister of Social Rights assumed the leadership of the party.

From the party leadership they assure elDiario.es that in this new stage they are going to “give great importance to the territorial and the local.” Sources from the Belarra team explain that, “taking advantage” of the change that has occurred in the Coordination Council of the formation, “there must be new voices” in the party. Even so, they maintain that they are betting on a “neutral” role in the primaries that begin this Monday. “We start from the principle that the candidatures that are presented are prepared and are good,” they point out.

Podemos Asturies faces this process with a ‘face to face’ between two of the most relevant figures linked to the party since its birth. The winner of these primaries will face a challenge shared by other regional leaders of Podemos: to improve the regional results of the 2019 regional elections. This party has gone from having nine regional deputies (18% of the votes) in the elections of 2015 to four representatives (10.9%) in the last elections. At the national level, they have also experienced a loss of support, this situation has limited their representation in Congress to a single deputy for Asturias compared to the two they had six years ago.

Despite the loss of electoral support, Ripa’s team claim that they have “a consolidated project” and boast of having “twice the number of regional deputies” than the rest of the Podemos delegations in “the northwest” of the peninsula. “We doubled the figures for Galicia, Cantabria and Castilla y León together”, indicate sources of the general secretary’s candidacy.

“When you have a living organization, what you have to do is protect it,” the same sources emphasize. And they add: “Of course we are worse than in 2015, like all of Podemos as a whole and all the space for change.” Along the same lines, they rule out the need to renew Podemos Asturies: “We will have to rebuild [la formación] in those territories where it has electorally disappeared because we believe that the wrong initiatives have been carried out. ”

For its part, Castañón’s team insists that after seven years with Ripa at the head of the formation “it is time for a change.” Likewise, the team of the national deputy is committed to “an organization that is proactive.” “Until now, dialogue with political and social forces has failed,” say the same sources, who also reproach the current secretary general for not joining the United Left – a force that has regional representation – in the regional elections. On this matter, the regional leadership maintains that they have been meeting for six months with the regional delegation of Alberto Garzón’s party to “improve the capacity for joint coordination.”

Ripa’s candidacy showed muscle last Saturday, in a pre-campaign event attended by activists and representatives of the formation such as the councilor in the Oviedo City Council, Rubén Rosón; the former MEP and councilor in the municipality of Avilés, Tania González; the spokesperson for Podemos-Equo in the Gijón City Council, Laura Tuero, and the former regional deputy Andrés Ron, as published by El Comercio.

A week later, this Saturday the first pre-campaign act of the Castañón’s candidacy. The national deputy will be accompanied by the regional representatives Rafael Palacios and Nuria Rodríguez; the spokeswoman for the municipal group in Oviedo, Ana Taboada; the councilor of the municipal group in Avilés Sara Retuerto, and Alejandra Tejón, municipal spokesperson for Podemos Xixón.

“We have profiles that are at all levels of organic and institutional politics,” indicate sources of Castañón’s candidacy, who assure that they also have the support of Alba González Sanz, Irene Montero’s advisor in the Ministry of Equality. For Ripa’s environment, one of the weaknesses of its training consists in presenting candidatures “launched from Madrid”.

“Why do the PP and the PSOE work at the state level? Because they have their own structures and capacity to act with autonomy in all the towns of Spain. If this is not understood, the current weaknesses of Podemos are not understood,” sources indicate of the Secretary General’s team. And they add, from the environment of one of the most veteran regional leaders, that in recent years “the ability to have their own voice” in the party has been limited.

Faced with the assertions of its internal rivals, Castañón’s team removes the label of being a candidate placed by the management. “We are saddened that it seems that [ese es] the only argument that the other candidacy has, “they point out in the surroundings of the deputy spokesperson of the United We Can parliamentary group. These same sources choose to emphasize that their candidate” has not stopped living “in Gijón since she was elected in 2015.” Where is Sofia from? Asturiana, “they reply from the Belarra leadership, to which the candidate also belongs.

Unlike Asturias, in the Balearic Islands for now only the candidacy of the national deputy Antonia Jover has been made public. Sources from the management of United We Can in the archipelago assure that they have worked on a candidacy “supported from Madrid.” In this territory, the national leadership considers that it is “more viable” to reach a unitary candidacy.

The acting Secretary General and Minister of Agriculture, Mae de la Concha, announced that she would not revalidate her mandate. “The Balearic Islands have been a very peculiar case all the time. To begin with, we have had the best territorial results of Podemos ever, both in municipal, regional and general terms”, indicates De la Concha, taking stock of his management at the head of the party . At the regional level, and as has happened in several autonomies, the formation deflated in the last elections, going from ten to six representatives between 2015 and 2019. In the general elections they have maintained a more stable trend, they have retained two seats since that the formation attended the elections for the first time.

De la Concha uses several reasons to take a step back. On the one hand, one of the reasons he provides is his age, he is 67 years old. On the other hand, the time it has been linked to the project, nine years. “I think more people have to participate,” he says. In addition, it states that work in the Government requires a lot of time and effort, to the detriment of internal functions. “It would be necessary to reinforce all the part of the bases, circles, small towns and see how to give more force and more word to all that,” he points out.

From the United We Can leadership in the islands, they value the work of their representatives in the autonomous government and defend that their role currently involves maintaining a “responsibility” with which “to reach agreements and continue governing.” The coalition is working to “diversify the economic model” of the region so that it does not only focus on tourism, the sources consulted maintain.

At the national level, the Belarra team assumes that it has to focus on the territories and the local. In December they have organized a meeting in Malaga in which all the councilors of the party, more than 500 representatives, will meet to “unite” and “coordinate” the work carried out by their municipal cadres, sources from the management point out. This Monday the first internal process of Belarra begins and in a week it will be known if the registered support the change of faces in the autonomous directions, in line with the aspirations of the national leadership.