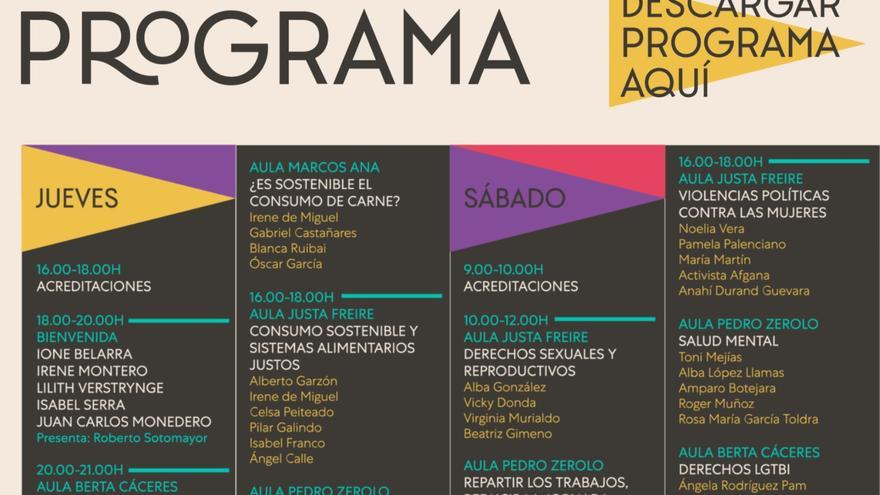 Podemos takes up the organization of the Autumn University, which this year will be held on October 7, 8, 9 and 10. Throughout Friday, Saturday and Sunday, members of the political formation of Ione Belarra and of spaces that converge in United We Can, together with activists, artists, communicators and various professionals will hold about thirty debates on issues that make up the political program of the training.

During the weekend in which these days are scheduled, attendees will talk “about the party, the experience of the Government, the aftermath after the Covid-19 crisis or about feminism.” The poster, that was just published, also includes round tables on the environment, the right to housing, the uberization of the economy, sustainable consumption, LGTBI rights, the crisis of the monarchy, cannabis or sexual and reproductive rights.

According to sources from the Podemos leadership, in this space they seek to “relaunch the agenda for political organization” with the debates that take place at the different tables. The objective of the training directed by Belarra is that the scheduled talks serve to “open and broaden” the training strategy with the contribution of “leaders and activists from this country.”

The conference will begin with a welcoming ceremony in which the leadership of the training will participate: Belarra; the Minister of Equality and Secretary of Government Action, Irene Montero; the Secretary for Organization, Lilith Verstrynge; the training spokesperson, Isabel Serra and Juan Carlos Monedero, director of the 25M Institute. The former secretary general, Pablo Iglesias, will also be present at the closing ceremony of the ‘Autumn Uni’.

Along with them, international politicians will participate in different spaces, such as the Argentine deputy Ofelia Fernández and the former vice president of Bolivia Álvaro García Linera. The feminist intellectual and theorist Nancy Fraser will also be present at a debate on the crisis of neoliberalism.

Members of other United Podemos organizations have also confirmed their attendance: the Minister of Consumption and coordinator of Izquierda Unida, Alberto Garzón, will speak at a table on sustainable consumption and the general secretary of the Communist Party and Secretary of State for Agenda 2030, Enrique Santiago , will attend a debate on public liberties.

The program broadcast by the party does not include the attendance of the second vice president of the Government and Minister of Labor, Yolanda Díaz. Sources of the formation assure that “although its presence is not closed” the organizers of the event “count on that it can participate”, “already it did it in the University of Podemos in Asturias celebrated a few weeks ago”, they affect.