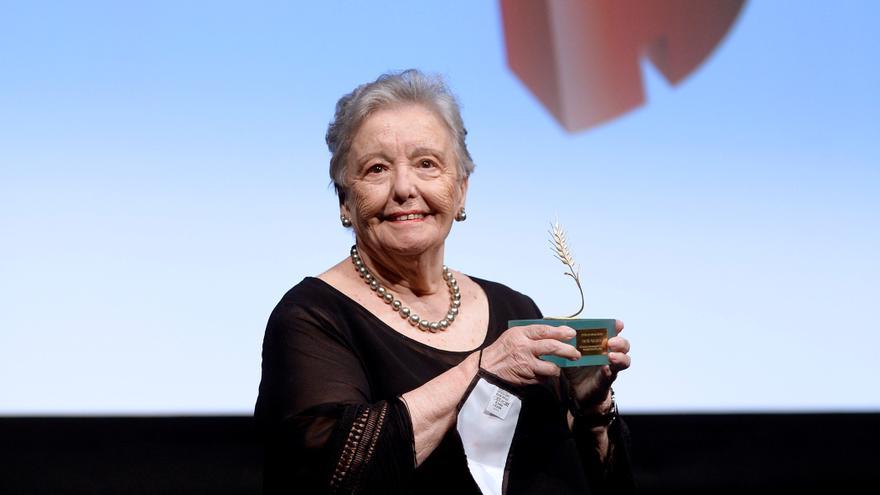 Madrid, Mar 25 (EFE) .- At 85, María Galiana, known as Grandmother Herminia in the television series “Tell me how it happened,” does not think about retiring; On the contrary, he loves working and this Friday he will premiere “El abrazo” at the Teatro Bellas Artes, a poetic text that humorously shows “the double standards” with which one lives.

“The human being shows to be generous and altruistic, but at the moment of truth the I, me, me, for me and with me prevails”, has told Efe María Galiana, who considers that this theatrical piece is very necessary in these moments: “Underlying the double standard with which we are used to living.”

“In this work the ability to love is put to the test”, says Galiana (Seville 1935), who as a theater actress has collaborated in several theatrical works such as “Las Troyanas” (2000), at the Mérida Classical Theater Festival, or in the cycle of monologues “Confidencias” (2003), among others.

“El abrazo” deals with the relationship of a woman, Rosa (María Galiana), and a man, Juan (Juan Meseguer), both of advanced age and former lovers, who meet again after almost a lifetime and their desire to have a child. that they never had is still alive. That same day a man appears happily at Rosa’s door. Is it real or an impossible dream?

This dramatic comedy, in which realism and fantasy are mixed, seasoned with a very fine humor, “it has been difficult to put it on its feet, it is not a usual theater, it is very original”, says the actress, who assures that it is a “living play in which the public does not have a moment of distraction “.

“Right now the hug is a utopia,” says the actress, who sees how people want to hug and cannot. “I only see hugs with masks and they really want hugs.”

With just a month and a half of rehearsals, this Friday María Galiana returns to the theater under the orders of Magüi Mira, of whom she says: “Working with this director is a great luxury, I only have words of gratitude and affection for her”.

Fernando Trueba, Vicente Aranda and Benito Zambrano are some of the directors with whom Galiana has collaborated, “all wonderful”, but he has never been so comfortable working as with Magüi Mira. “He has great respect for the actors and that today is not paid for with anything,” he adds.

After twenty-four films, the appearance in a dozen television series, as many plays and 38 years dedicated to teaching, María Galiana does not think about retirement. “I like to work, I love to work.”

He just wants physical and mental health. Physics has it regular. “Like all old women, I have ailments that I do not account for, but mental health is essential,” adds the actress, who at almost 86 years old (she will be in May) is waiting for the covid vaccine to arrive. -19.

Until her turn comes, she works following the protocols established by health: “I don’t take off my mask at all, only when I act,” adds the actress who, laughing, says: “They’ve stuck the stick in me more than fifteen times, all of them. the weeks they do a PCR to me “.

She remembers that during confinement she lived quietly in her house in Seville and that she took the opportunity “to read and watch a lot of movies” and in July she went to the beach, where she rested “a lot”.

She is aware that the theater is demanding, “but nothing compared to teaching, giving four classes a day that is hard,” says Galiana, who worked as a professor of Art History – a work that she combined with acting – in an institute Sevillian until 2000, when he reached retirement age.

“You can’t imagine what it’s like to deal with 40 wild beasts,” laughs the actress, who loves young people: “I understand them very well, she got them right away.”

And it is that, according to affirms, his true vocation has been teaching: “I have never felt a frustrated actress, nor did it occur to me when I was young to try to make my way into acting”.

Learning scripts and theater texts does not cost her much, because she has not lost the habit “of studying every day,” says Galiana, who recalls that she has been a teacher who liked to innovate. “I squeezed my head so that the student wouldn’t get bored.”

She has been playing Herminia for twenty years in the series “Tell me how it happened” and a few days ago the filming of this last season ended. “In September, God willing, I will return with this character who has given me so much joy”.

Meanwhile, enjoyed with that “delicious play” that will be on the bill until May 2. EFE