They agree so much that the only discrepancy they highlight is that of the last Canarian football derby. Lluís Serra, rector of the University of Las Palmas de Gran Canaria (ULPGC), and Rosa Aguilar, rector of La Laguna (ULL), staged in a joint interview in CANARIAS7 their harmony and the conviction that "the only way to get out of poor” is the investment in education and in public universities in the Canary Islands, in its dual aspect of providing training through teaching and research.
"We are the only possible investment so that the Canary Islands have a future", sums up the maximum leader of the Tenerife university. "We understand that public universities have to go together, there has been a change of cycle and we have the same problems," adds Serra.

Both highlight the loss of weight of the Canarian public universities in the successive regional budgets, and they go hand in hand in the negotiation with the Government to close this year a program contract that guarantees multi-year financing in exchange for the fulfillment of objectives. But they believe that for this the public authorities and society in general must "know the value of the two Canarian public universities." And sometimes they don't perceive it, they say.

Lluís Serra explains the good harmony between the two universities because they have the same problems, however, he adds, "throughout 35 years of history" the rivalry between the two institutions has been "promoted because it has been convenient for some governments to have them discussing issues minors to avoid agreement on important things.
With the change of “cycle”, the teams of both “work together. I think there is a very good harmony. We have the same problems and by adding we multiply the capacity for influence », he adds.

Rosa Aguilar agrees. "We are sisters, we have the same needs and problems and what we do is collaborate." Both institutions, she adds, «we believe in the objectives of sustainable development and 17 talks about establishing alliances. That is what we have done. The ULPGC, the youngest, was born from a social demand. Society believes that public universities allow us to be masters of our own destiny.

The rectors ask the Government for a financial "last push" 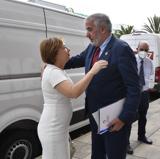 The rectors greeting each other. /
Juan Carlos Alonso

Both rectors have also called for a "pact" in the Canarian Parliament for research to "finance the Canarian research system for a decade at a rate of six million euros a year." That, says Aguilar, “is to give us a little love. I think that everything happens because they believe and know the value of research for the Canary Islands».

Both rectors explained in the Canarian Parliament that
they needed a "float" of 20 million euros each or they could close services. “We talked about a float and getting on the boat. The float to avoid drowning is that we need a minimum structural budget. If the average per student in Spanish universities is 10,500 euros, we are at 9,500 euros, 1,000 below the national average.
We need 20 million each for the weight loss we have had in the Ministry of Education. We have gone from 14% to 11.4%. They are not prioritizing public universities. If we had weight we would have those 20 million and that is so as not to close services. Either we stop doing things or, as in families, we have nothing to pay for it. And more now that everything is going up. In addition, since 2011 they make us pay 23% more for the social security of our new employees. In the 2022 budget we have not increased the 2% more that we are paying in the payroll of our workers. We are in a critical situation and it is the float. But we don't want to always be in the water, we want to be put on the boat and that is the program contract that the managers are already negotiating," Rosa Aguilar explained.

Serra, for his part, lamented that the financial autonomy of the universities is not high. Even to use the remnants, 30 million in the case of the ULPGC and 26 in that of La Laguna, they have had to request permission from the Treasury. This Thursday, precisely, the Government approved the measure. “They must give us the instruments so that we can compete. We can't raise prices, we can't raise rates, and ours are the lowest in the state and have been frozen for years."

The question, said Rosa Aguilar, is about why “universities are not seen as an investment.
The only way to get out of poverty is education, university training. And I am an example of it. Without a public university, I would not be sitting here. When I say having public universities allows us to be masters of our own destiny, it is because if we do not have universities, who would train our professionals? We would have serious problems to have lawyers or architects. In the Canary Islands that already happens in the non-capital islands. When we take degrees there, some end up staying.
Having professionals is a symbol of an advanced society and is fundamentalotherwise we would have to close the islands. And then there is the research part. Who is going to investigate specific issues in the Canary Islands? . We have begun to investigate the volcano of La Palma and how to help the reconstruction and the palm population. They have to know us more. We are an investment and we are the only possible investment so that the Canary Islands have a future”.

Serra points to areas such as oceanography or climate change and the important role of research in universities. “The great research is done in the universities. This does not happen in other territories.

Both rectors recognize that the design of projects to attract European funds after the health crisis have not felt "protagonists" when the universities could have monitored the proposals. «
We have never felt protagonists and we should have felt it because we could be much more tractors. The circular economy, the green economy, including the Canary Islands with the change in the tourism model. We run the risk of repeating mistakes of the past. Not putting the right investments in the right places. In those areas where investment has been made in R&D&I, the investment is multiplied by five, or by six”, said Serra.

«
When we lived through the pandemic and how important research was to get a vaccine, I thought we were going to believe in research again. But with the Next Generation funds, the two public universities put in place a project to diversify the economy and it is still on the table”, laments the rector of the ULL.

«There are many researchers who are participating, but not the institutions as managers. The Government knows that it has us at its absolute disposal and that our collaboration is total”, added Serra.

The Government defends the program contract in exchange for objectives. What would the universities be willing to do? Lluís Serra remembers that
the Executive speaks of five indicators. “We agree and more can be introduced. Our collaboration is total and absolute.

Rosa Aguilar recalls that universities are "the most audited institutions", and that they are not afraid of it. “We are used to that. We are innovative institutions that want improvement to better serve society.

The two institutions have a high dropout rate -students who leave the degree after the first or second year- and both indicate that they are trying to correct it by introducing changes such as the improvement of teaching technologies as well as new degrees.
«What we want is to be masters of our destiny and for that we have to be multidisciplinary universities, not only training in those professions in which there is apparently a demand because the market says so. We have to create professionals in all areas to be a sustainable territory.”

Regarding the private universities in the Serra Islands, he assures that "if they are required to do the same" as the public ones, "they are not competition."
The problem may arise "in certain areas" of knowledge but "with the development of the new university law we will see who can and who cannot continue to be called a university. Our forte is research », he adds.

For her part, Rosa Aguilar agrees. “They are not competition in any sense. We provide different products and services. In public universities we don't have professors, we have researchers who teach. The product is different », she says.

The two institutions face massive retirements in the coming years and the renewal of the templates is not as fast as they would like.
"I wish we could hire 1,600 teachers as Education has announced"Serra says. To “get 30-odd teaching positions, you have to make a tremendous effort. It's very complicated, she remembers. According to Rosa Aguilar, “Everything goes through financing and since 2011 social security has increased by 23%. For every four officials who retire, we can hire three.
We are losing muscle mass. It is like the Teacher's Master's degree, we would be delighted to offer more places but we need resources”, both rectors agree.

Both agree that there are degrees that can be done to respond to social demand. It is done, they say, after thinking it through and always with a consensus.

It is necessary to do self-criticism, says Serra, to correct the gap between the university and Vocational Training (FP).
Both believe that universities must adapt to the social and territorial regional reality and do "pedagogy" because there is "resistance," said Aguilar.