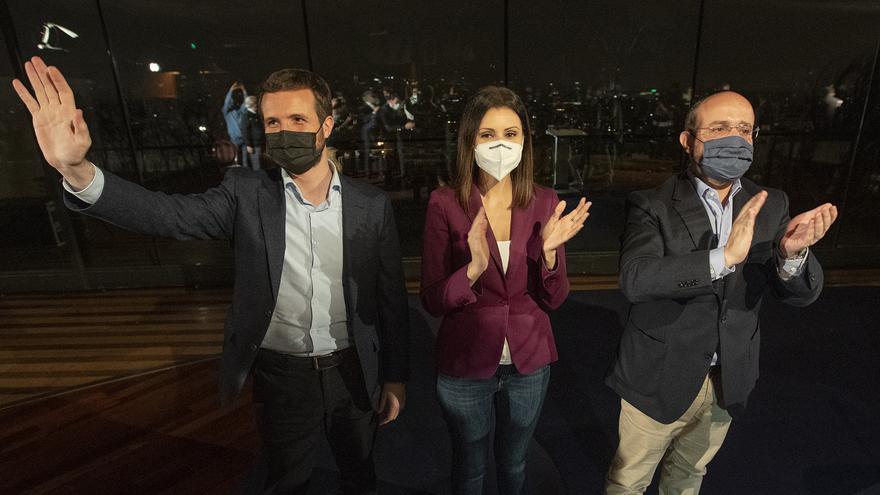 Without an iota of self-criticism, the leadership of the Popular Party of Pablo Casado does not plan to modify a single comma of its opposition strategy despite having fitted in in Catalonia the worst result in its history, remaining as the last political force of the Parliament without being able to benefit from the collapse of Ciudadanos and after failing to avoid the feared surprise of Vox, which in Sunday's elections tripled in seats to the PP, entering the new Catalan chamber as the first force with 11 seats. This is clear from the internal arguments sent this Monday by Casado's team to all party officials so that they repeat their slogans in their respective public appearances, and to which elDiario.es has had access

Genoa 13 maintains that the elections "have taken place in a tremendously difficult context due to the pandemic, which has made the campaign difficult and has caused participation to plummet to an all-time low." "Half of the Catalans, the constitutional majority, have not voted," they point out from Genoa 13. For this reason they do not believe that neither Casado nor Alejandro Fernández, their candidate in Catalonia, should assume any responsibility for the debacle.

The PP leadership continues to maintain that Alejandro Fernández is "a great candidate." "The PP is the only party that has spoken about the real problems of the Catalans and it is a long-term project, which is more necessary than ever since today," he adds. "Sánchez has preferred to polarize society and feed the extremes in order to harm his only moderate, constitutional and pro-European alternative, which is the PP", they conclude.

"The result of the PP has been bad because we lost a seat, but the Catalan elections have never been extrapolated to the national level. 3 years ago a constitutionalist party multiplied us by 9 in the Catalan elections, but afterwards we multiplied them by 9 in the general elections. The emergence of the populist right has already occurred in other regional parliaments in the last 3 years. Just 6 months ago the PSOE was surprised by the BNG in Galicia and a year ago by Podemos in Barcelona, ​​Madrid, Valencia and Cádiz. being the only alternative to Sánchez and Iglesias, already almost tied in votes in polls, "insists Génova 13.

"There have never been so many attacks"

Remarking the theory of "foul play in the electoral campaign" that Casado has attributed to the left, the PP leadership considers that "never has a party received so many attacks within days and hours of voting." "Our expectation of voting was 10 seats two weeks ago, according to the average of polls published, including the Catalan CIS. But in a single day that expectation collapsed by half when the pact of the Prosecutor's Office with Bárcenas was published," he says.

What Casado's management maintains is that there was an "agreement" between Bárcenas and the State Attorney General's Office to make public during the Catalan campaign the letter that he sent to Anti-Corruption, in which he detailed the illegal financing of the PP for decades, to harm to the popular ones in Catalonia. "But that only reinforces our commitment to exemplarity as our affiliates ordered us in primaries. This is the last bill we are going to pay from that past. We are not going to change course, Spain needs the project more than ever of the center-right reformist, liberal and honest that represents the PP of today, the PP of Casado, "insists the popular leadership.

"Tomorrow the National Executive Committee will take place to analyze the electoral results. Alejandro Fernández has our full support to rebuild the alternative for a better Catalonia than the one left yesterday's election night for the interests of a united, prosperous and free Spain. ", he concludes.

The message to the barons: the result is the responsibility of "everyone"

"We are going to stay the course. We are the constitutional alternative to the independence movement," said the Deputy Secretary of Communication for the popular, Pablo Montesinos, in an interview on TVE this Monday. Following the same theory defended last night by the party's general secretary, Teodoro García Egea, in his appearance at the national headquarters of the PP, the head of Communication for Casado has insisted that the result in Catalonia "cannot be extrapolated to the national level." Along these lines, Montesinos has argued that "three years ago Ciudadanos multiplied the results of the PP in Catalonia by 9 and in the general elections the PP won Ciudadanos by nine".

Although Montesinos has recognized that the results of the 14F "are bad for Catalonia and the rest of Spain", he has considered that it was the supposed "pact" of the Government with the ex-treasurer of the PP Luis Bárcenas that "diminished" the electoral expectations of his party in Sunday's elections.

Asked about a probable demand of responsibilities by the main barons of the party to the direction of Casado in the National Executive Committee that will meet tomorrow Tuesday in Madrid, Montesinos wanted to make it clear that the poor result in Catalonia is attributable to "everyone" . "The entire PP has committed itself to these elections", assured the Vice Secretary for Communication, thus recalling the participation of the barons in different campaign events in Catalonia.