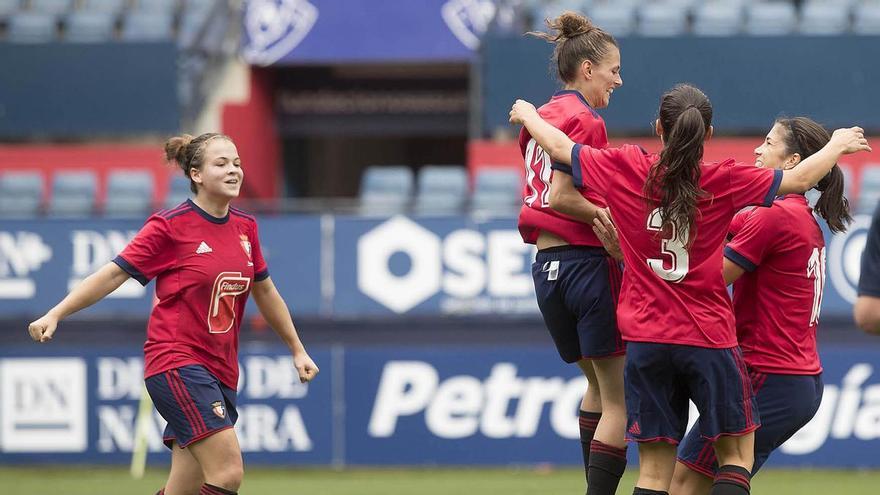 The three points added this Saturday by the Osasuna Female B in the field of New Mountain (0-5) was the only positive thing about Rojilla's visit to Santander. The players of the Navarrese club received during the clash all kinds of macho comments and sexual threats, something that they have denounced through the social networks. The collegiate who led the meeting was insulted, as stated in the minutes.

"I am going to rape you", "We are going to rape your whole team", "We go to the locker room and I rape you", are some of the threats that Karolina Sarasua, the forward of the rojillo team, of only 17 years, had to listen in his visit to the Santander countryside. The player from the Pamplona subsidiary wrote down on a piece of paper each one of the very serious verbal offenses that she heard throughout the 90 minutes and disseminated it through Instagram calling it "shameful", an adjective that falls short.

Comments that a player from B.
It is unfortunate that things like this keep happening without any consequence.
I have no words 🤮 pic.twitter.com/oVfu35EfyT

"Pull up your shirt to show me your tits and ass", "Your thong shows" and "You have the face to suck it well" are other comments made in Santander. "It is unfortunate that things like this continue to happen without any consequences. I have no words," wrote María Blanco, a player from Osasuna's first team who helped make the facts public. "We neither have nor should we tolerate any more this type of denigrating actions towards women. You have my full support, partner support. Yesterday it was to you, tomorrow it will be to another," tweeted the captain of the first team, Mai Garde.

The captain of the Barça, Alexia putellas, has shown his displeasure with the situation and has given support to the Osausna players. "Oh my gosh, this is more than regrettable. We should all do our best to let it not happen anymore, neither in sport nor anywhere. It's very serious. All my support for these players who have had to live such a situation while playing a match, "wrote the soccer player, candidate for the Ballon d'Or." Thank you all very much for taking the time to support my team and me, we are totally grateful and we hope that what we have experienced will not happen to anyone else ", thanked Karolina.

The minutes collect it

The minutes of the match, signed by Lucía Fernández Luna, collects the facts, and points out "five boys" with the Nueva Montaña clothing as guilty. "During the development of the second part, I noticed the presence, outside the enclosure, of five boys on the fence of the field, in the midfield zone, behind my assistant number 2, who wore, at least one of them, the tracksuit with the shield of the local team, SD Nueva Montaña. They addressed both the players and me personally during the development of the second half with offensive comments".

We neither have nor should we tolerate any more this type of degrading actions towards women.

You have all my support partner support.
Yesterday it was to you, tomorrow it will be to another. 💜 pic.twitter.com/mAElz5iwrW

In the document he adds the complaint made by Osasuna: "Once the match is over, the delegate of the visiting team, together with the player number 9, Mrs. Karolina Sarasua García, present their complaint to me about said lack of respect and they tell me exactly the terms with which they addressed us: "I'm going to rape you", "we're going to rape your whole team", "pull up your shirt to show me your tits and ass", "Your thong is noticeable", "we go to the locker room and I rape you", "your mother sucks it on me", "you have the face to suck it well" ".

#Osasuna wants to show its rejection of the comments received by one of the players of #OsasunaFemB in the match played this afternoon.

Likewise, he wishes to thank the support of the @ SDNMAH1922 for his exemplary attitude to what happened.

Osasuna exonerated the Cantabrian club of the events, and even thanked him for his support: "Osasuna wants to show his rejection to the comments received by one of the Osasuna Femenino B players in the match played this afternoon. Likewise, he wants to thank the support of Nueva Montaña for its exemplary attitude before what happened ".