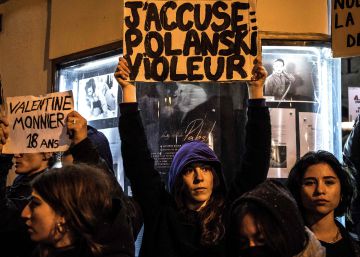 The French Film Academy has committed on Tuesday to revise its statutes to be more democratic and, above all, more equal, after the harsh criticism issued by some 400 Gallic actors and directors who in an open letter published in Le monde They have accused her of serious “dysfunctions.” A few days after the ceremony of the César, the great festival of French cinema, the artists demand a “profound reform” of the governance of the Academy responsible for organizing and awarding these awards. The institution, concerned that this latest protest may affect a gala already threatened by feminist demonstrations, hastened to ask for “calm” so that “the proper functioning of the 45th César Ceremony is not jeopardized and has announced that appoint a “mediator” to implement all the promised changes.

And is that the relief accumulate in recent times. They are not alone the 12 Caesar nominations received by The officer and the spy despite the new rape accusations weighing on its director, Roman Polanski, which has led feminist organizations to call protests at the February 28 gala. There is also the indifferent response, if not outrageous, of the president of the Academy of César, Alain Terzian, who replied to criticism stating that these awards “are not an instance that should have moral positions.” As actors like Bérénice Bejo, Chiara Mastroianni or Omar Sy make clear in their rostrum, as well as filmmakers such as Michel Hazanavicius, Bertrand Tavernier or Céline Sciamma, has bothered, and much, the decision of the Academy to veto two prominent women, the writer and director Virginie Despentes and the renowned director Claire Denis, as “godmothers” of the traditional Dinner of the Revelations held before the annual ceremony of French cinema to the young actors and actresses who aspire to one of the coveted awards of The prizes of Gallic cinema. Decisions all these taken just when it takes place in the United States the trial for sexual abuse against producer Harvey Weinstein that unleashed the Me Too feminist movement around the world, including France but with some delay.

The Academy operates in an “opaque” way and through an “elitist and closed” system that results in a structure where “most of its members do not recognize themselves in the decisions made in their name and that do not reflect the vitality of current French cinema ”, Denounce the signatories of the tribune in Le monde. “It is time to consider a thorough reform of the association’s governance modes so that they approach those of foreign institutions and the democratic operations that frame them,” they claim.

After the first criticisms of the lack of parity in the institution, its director, Terzian, recognized last Sunday in the Journal of Dimanche a “complicated climate” for nominations for Polanski’s movie and said he is working to achieve “a cultural revolution to achieve parity,” with the same number of women and men at all levels of the Film Academy. Currently, only eight of the 47 members of the General Assembly of the institution are women, also minimally represented – six of 21 – in its Board of Directors. The lack of women is widespread in the Academy, whose members – responsible for nominating and voting the best films of the year – are overwhelmingly (65%) men.

Although the Academy does not directly select its members, because these are the ones who must present candidates and see their candidacy automatically validated if they meet the requirements, that body contemplates softening some conditions so that more film professionals can be part. Currently we have to have two sponsors and have worked on three films in the last five years, a figure that Terzian studies to reduce to two films.

After the protest of the actors and filmmakers – members all of the same Academy that criticize – the institution assured Monday night its willingness to undertake an “evolution” as soon as possible, for which it will be necessary to modify the founding statutes, he recalled in a statement, in which it was also willing to “reshape generational links.” On Tuesday, it was announced that the National Cinematographic Center (CNC) will be asked to name a “mediator” charged with carrying out a “profound reform of the statutes and governance” of the Academy.