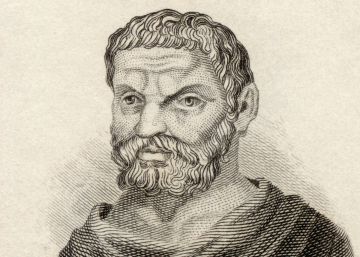 It was not very misleading Thales of Miletus, the greatest of the seven sages of Greece, when, in the sixth century BC, he said that water was the primordial substance of nature. Remember that, for the ancient Greeks, there were four basic elements that, mixing in different forms and proportions, gave rise to everything that existed, and these elements were air, water, earth and fire. And Thales, observing that water can be liquid, solid or gaseous and that it is present in the earth (in the form of moisture) and in the air (in the form of vapor), he thought that this was the ultimate essence of all things.

But what about the fourth element, fire? Is it not the opposite of water, which is why it is always used to extinguish it? It seems the weakest point of the theory of Thales, and yet the relationship between water and fire is the narrowest of those between the four elements.

The formula of water, HtwoOr, it is undoubtedly the best known of the chemical formulas; but not everyone knows that it is the second term of a reaction that represents a combustion: 2Htwo + Otwo à2HtwoOR

Hydrogen is very flammable (that's why helium is usually used in balloons, less light and more expensive, but inert), and when it burns, two hydrogen molecules combine with one molecule of oxygen to produce two molecules of hydrogen. Water. So water, in its origin, is fire, which is to say that fire-the intense exothermic reaction that occurs when hydrogen and oxygen combine-is water, as Thales intuited.

And the other fires? What usually burns in nature and in our homes, or in the engines of explosion, is not hydrogen. Or if? To a large extent, yes: the usual fuels are hydrocarbons and other compounds of hydrogen and carbon, and when they burn they produce mostly water and carbon dioxide. For example, when burning methane, the simplest of hydrocarbons, the following reaction occurs: CH4 + 2Otwo à COtwo + 2HtwoOR

A methane molecule combines with two oxygen molecules to produce a molecule of carbon dioxide and two molecules of water; in this case the fire is … very hot gas.

An ethanol molecule combines with three oxygen molecules to form two molecules of carbon dioxide and three of water. In this case the fuel itself provides oxygen and, on the other hand, the proportion of carbon dioxide is higher, but the flame remains "water with gas".

The familiar formula HtwoOr it means that a water molecule is formed by two hydrogen atoms and one oxygen atom, and its peculiar molecular characteristics make water the "universal solvent": many of the chemical reactions that occur in nature take place in aqueous medium , and in many others, as we have just seen, water is produced. In addition to combustion, the most well-known water-generating reaction is that of an acid with a hydroxide, as a very familiar phrase reminds us for those who study chemistry: "acid plus base, salt plus water"; for example, when hydrochloric acid reacts with sodium hydroxide, sodium chloride (common salt) and water are produced: HCl + NaOH to NaCl + HtwoOR

Its condition as a universal solvent makes water essential for life as we know it, because in a liquid state (in which it stays fairly stable between 0º and 100º Celsius) it provides an ideal medium for the molecules of other substances move freely and combine with each other. That's why our body contains around 70% water and we can not survive long without drinking. After all, Thales was not misguided.

Master forms is a section by Carlo Frabetti dedicated to explaining the main formulas of mathematics and physics, their origin, evolution and precise meaning.

Carlo Frabetti He is a writer and mathematician, a member of the New York Academy of Sciences. He has published more than 50 scientific dissemination works for adults, children and young people, among them Damn physics, Damn mathematics or The big game. He was a screenwriter The Cristal ball.