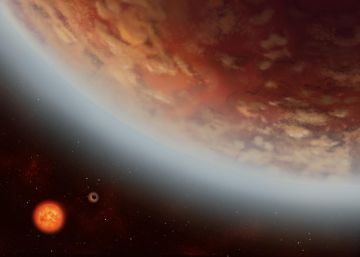 Water is very abundant and in the universe it can be found everywhere, even on the surface of the stars. However, detecting it on rocky planets at the proper distance from its star is one of the necessary requirements to consider whether a world is habitable or even to look for the first signs of life. Today, the magazine Nature announce the find of a signal that reveals that there is water in the atmosphere of K2-18b, a somewhat larger planet on Earth that orbits a red dwarf star 111 light years away, in the constellation Leo.

The interesting thing about the discovery is that, unlike most planets whose atmospheric composition we know, K2-18b is not a gas giant, like Jupiter, orbiting very close to its star. This object is in what is known as the habitable zone, the fair distance at which water can remain in a liquid state, and has characteristics that make it something like a super earth, with slightly less than eight times the mass of the Earth and 2.3 times its radius.

However, the world studied by the authors of the detection, a team from University College London (United Kingdom) led by Angelos Tsiaras who used images collected by the telescope Hubble, is not exposed to the same conditions as Earth. The star is a red dwarf, the most abundant type in the universe. That makes them good candidates to host worlds with life, but they are quite different from our Sun. Without a sufficient mass to consume their nuclear energy in a stable way, from time to time they launch flares that, at least until now, were believed to sweep the atmospheres of nearby planets like K2-18b.

"It is the first time that water is detected on a planet of such small size," he says Enric Pallé, an expert in extrasolar planets of the Astrophysical Institute of the Canary Islands who has not participated in the study. “And if it can be done with the Hubble, with the James Webb (a much larger telescope that will be launched predictably in two years), it will be possible to do it on more planets, smaller in size and with greater precision, ”continues Pallé. The question is still whether red dwarfs provide a suitable environment for life. "That water was found in the atmosphere of this planet means that many of the planets that orbit those stars could have an atmosphere," he says.

Over the next few years, new instruments such as James Webb they will allow us to get much closer to the atmospheres of the thousands of extrasolar planets discovered. It is also possible that new data shape our vision of what happens in those distant worlds, something that the article published today in Nature. Red dwarfs emit much less heat than the Sun and for a planet in its orbit to receive enough energy to keep its surface water liquid, it must be very close to it. This causes that, as long as a smaller object turns too close to a much larger one, as happens to the Moon with the Earth and Mercury with the Sun, its orbit is fixed and always shows the star the same face.

In the case of a planet like K2-18b, it is foreseeable that the hemisphere that is always exposed to the star remains scorched and the one in the shadow is frozen. This would leave in the middle of the two halves of extreme weather a strip with a temperature more or less suitable for life. Scientists also suggest that if they have a sufficiently dense atmosphere, it can be used to create climatic dynamics that generate a less extreme environment.

But it is possible that the new planet is not exactly a super earth and looks more like a mini-cat, the most common type of extrasolar planets. Although the mass of K2-18b is eight times greater than that of the Earth and is below ten in which we start talking about mini cats, its radius, with 2.3 times the terrestrial one, is slightly above. This means that its atmosphere can be much wider and denser than Earth's, something that would mean that the atmospheric pressure on that world would be very high and that the conditions for life would be, at least according to the current criteria, more arduous.

All this is, for now, speculation, but the finding announces a new stage in the knowledge of the thousands of worlds we already know outside the solar system.