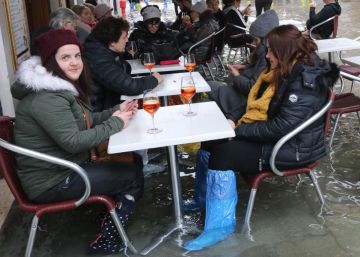 Venice has suffered floods again this Sunday, registering a 150-centimeter sea level rise that has flooded 70% of its urban area, although the waters have already descended and the situation is improving. It will continue like this, at least until Monday.

The meter located at the entrance of the Grand Canal recorded a water increase of 150 centimeters at 13.15, 10 less than feared, and then the sea level began to decline, according to data from the City Council.

Five minutes later, at 13.20, the sea level reached 148 centimeters, which showed that it was going down, although it was still above the 140 centimeters that indicate the red level of exceptional high tide. At 16.25 the water level showed a height of 101 centimeters.

The forecast for Monday and Tuesday is more reassuring, as a height of about 110 centimeters is expected (within the limits of a measured tide) that, at most, will affect 5% of the island.

The mayor, Luigi Brugnaro, provided with raincoat and in the middle of a flooded street, has celebrated this fact and has ensured that the city will recover because "the Venetians only kneel to pray."

Venice has lived days of anguish in the last week, after Tuesday suffered a tide of 187 centimeters, the largest in more than half a century, since 194 centimeters of 1966, which has caused considerable damage and caused the death of a person.

The flood of Sunday has been greater in the islands that separate the lagoon of Venice from the Adriatic Sea: in the Lido, for example, a level of 155 centimeters was reached.

After the truce on Saturday, Venice was prepared for this new tide that was expected to be greater and the City Council kept the emergency system alert and asked citizens and tourists for caution. In the middle of the morning, for example, the catwalks were collected, which are usually installed in these times in the city streets in case of get high normal, not as extreme as the last few days.

And the mayor ordered the closure of the emblematic square of San Marcos, which was completely flooded again, because it is the lowest point in the city. In the middle of this Sunday he authorized his reopening. In addition, the shops and restaurants in the main square are finishing repairing their damage and cleaning to resume their activity as soon as possible.

As a precaution, all the municipal museums of Venice will be closed during the whole day, with the exception of the Correr Museum, dedicated to the history of the former Serene Republic.

The councilor thanked the support samples received, in an interview with RAI public television, and again proposed to the international scientific community, the United Nations or the European Union to go to Venice to study the effects of climate change, a phenomenon to which Attribute these floods.

The Italian Government decreed the state of emergency in Venice after the flood last Tuesday, already considered historic, and approved to allocate 20 million euros for a first aid, with compensation of 5,000 euros to the affected neighbors and up to 20,000 for merchants. The City Council estimates that the damages suffered by the water that night amount to 1,000 million euros.

70 churches of the city ended up soaked and its delicate mosaics and pavements suffered the infiltration of sea salt. To avoid its rapid corrosion, the Superintendence of Heritage believes that 60,000 euros will be needed for each temple.