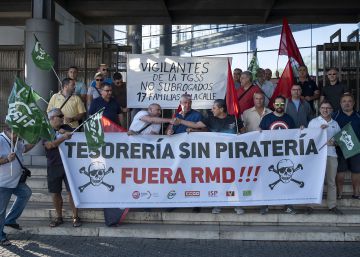 Francisco Ocaña and his 16 fellow security guards at the headquarters of the Social Security Treasury in Seville rubbed their eyes two months ago when his new company, RMD, He told them that they should give up their seniority as workers or go to the streets. Some of them with 28 years accumulated in the position. "At home they asked me 'how is being in the Ministry of Labor, which monitors why companies meet their obligations, they are going to do that barbased? It is impossible'. And I did not believe it, "he says. But after weeks of disbelief, the 17 vigilantes saw that the reality was imposed and were dismissed by the winning firm of the competition of 586,060 euros a year offered by the Ministry of Labor, ultimately responsible for their labor paradox.

It rains on wet for these 17 security guards. Your previous company, Surveillance and Security Synergies, owned by controversial businessman Canario Miguel Ángel Ramírez, nicknamed the king of security, left them a debt in unpaid wages of around 150,000 euros, according to the unions. In parallel, in 2017 the Ministry of Labor denounced Sinergias before the Prosecutor's Office after having proposed to sanction it for Social Security fraud.

With these precedents, last May the 17 workers received RMD's proposal to lower the average salary from 1,368 euros to 1,168 euros in 15 payments a year. "When it came time to subrogate us, RMD demanded that I give up 25 years old, restart from scratch knowing that with voluntary resignation the company can take you, or not. Even being the law on our side, "insists Ocaña, who Sinergias owes 14,000 euros for back wages. After the firm entered into bankruptcy two months ago, the default now falls to the insolvency administrator.

Both the Public Sector Contracts Law, the Workers' Statute and the collective agreement of security companies stipulate that RMD must subrogate the dismissed workers. "The Ministry accepts the breach of the contract and we are helpless. If the Treasury does, what will not the companies do? In addition, the Labor Inspectorate should have acted ex officio, "laments the watchman Carlos García. The breach has caused that the seven major unions in the security sector have joined together in a platform to force Labor to react and denounce the dismissals.

"RMD understands that the situation is not caused by us, but by Sinergias, and that we have acted in accordance with the agreement. The workers have no responsibility but they have the right to be kicked because they have lost their jobs. The bulk of the problem is the lack of documentation from Synergies for subrogation and that there are irregularities in the payroll, with bonuses not counted in the cost of employees, "says Ismael Fernandez, head of security at RMD, adding:" The Treasury is aware of all the steps we have taken. This will end in a court and if the judge determines that they are right, they will return to their posts. " Fernandez says his 17 new employees are hired under the state security agreement. The firm has about 500 workers throughout the country and maintains contracts with various Administrations, the State, autonomies and municipalities.

For the Ministry of Labor the resolution of the problem is not in your hands. "It is a matter of the company and no statement contemplates the obligation to subrogate (…) The subrogation in the workers exceeds the powers of the Administration, being an exclusive matter between the unemployed and the new contractor," argues a spokesman. Work shields itself in point 22.1.5 of the contract document, which states: "The personnel will depend exclusively on the contractor (…) being the General Treasury of the Social Security other than those labor relations."

The professor of Administrative Law of the University of Zaragoza José María Gimeno Feliú considers that the Ministry, as contracting body and guarantor of the public interest of the contract, is responsible and has the power to annul it, while not fulfilling essential conditions of the tender and the provision . "It is an action contrary to the current Public Sector Contracts Law and its interpretation is in fraud of law, because what the law intends is the quality and stability in the use of public contracts. The breach of this purpose would be grounds for termination of the contract, with imposition even penalties. The expert adds: "When the legislator says that the company must subrogate them all, there is a contractual breach if the result is the opposite. The company thus fails to meet an essential condition of the contract, which would be cause for resolution.

The new Law of Contracts of 2017 (approved with the vote in favor of all the forces except the abstention of the PSOE) looked for the protection of the quality and stability of the employment. "What the company wants is far from the spirit and the letter of the new regulations of 2017," says Gimeno Feliú.

In parallel, the Supreme Court reversed last November the system of contracting services and fixed in a judgment that the awardees must assume the debts that arise with the Treasury or Social Security of their predecessors, in addition to those of the workers. Until last autumn, the law obliged companies to subrogate workers with more than seven months of contract, but now also the debts carried over correspond to the new contractor, according to the high court. Diego Giráldez, federal head of Private Security at UGT, says: "The turn affects one million cleaning workers, call centers and dependence. We are waiting for the Government to guarantee that the Treasury and Treasury certifications on the payment stream and the postponements are firm. Or a legislative amendment that affects the Workers' Statute ".

Synergies of Surveillance and Security broke the private security market seven years ago, sheltered from the labor reform of the PP, with base salaries of 660 euros that only with supplements exceeded the minimum wage. The creator of Sinergias, the Canarian entrepreneur Miguel Ángel Ramírez, had a staff of 3,500 employees and accumulated up to eight million in awards from the Ministry of Labor for the surveillance of their official buildings.

Two months ago, Sinergias filed a creditors' meeting, although it has contracts with the Government of the Canary Islands, the Cabildo Insular de Gran Canarias and several City Councils. The Administrations are in the process of annulling the concessions in force to bring them back to tender, given the non-payment of payroll to the workers. "The Fogasa is paying now", confirms José Manuel Ojeda, of CC OO in the islands. This newspaper has tried unsuccessfully to contact Ramírez.

In parallel, the Supreme Court annulled in February the synergies collective agreement signed in 2015 upon ratifying the ruling of the National Court that had already decreed it illegal. The signing of this agreement took place thanks to the creation of a committee of workers related to the company since the labor reform of 2012 gave priority to company agreements over those of superior scope, and this allowed Sinergias to freeze salaries during the first five years . "Its sole purpose was to reduce the working conditions of the workforce with the aim of lowering costs to make the company more competitive," denounced UGT this spring.