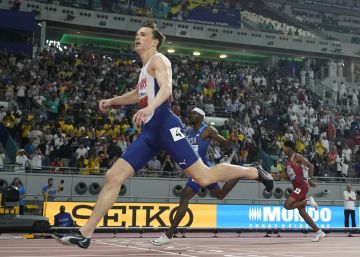 No, Karsten Warholm did not beat the world record. Nor did he descend from the 47s in the final of all the finals, that of the 400m hurdles, which he won (4742s), as he had won the London World Cup final two years ago. The silver went to the American Rai Benjamin (47.66s) and the bronze to the Qatari Abderramán Samba (48.03s). None of the three lived up to the hopes they had awakened. Only four athletes in history have descended from 47s in the test of the 10 hurdles and the 13 strides between each one. Three are they, three young people with all the athletics ahead. The fourth is Kevin Young, the American who broke the world record (46.78s) in Barcelona 92 ​​and who, 27 years later, is still waiting, wishing for someone to take it away. Everyone meets the conditions, but none knows how to do it.

The most gifted is Warholm, the 23-year-old Norwegian trained by veteran coach Leif Olav Alnes, whose motto, “greed is good,” extracted from the film Wall street, It cannot be more contrary to the spirit of the test that demands both rhythm and speed. "The key factor lies in the ability of the hurdler to control speed," recommends Young lads, who broke Edwin Moses' record at age 25. “Technically it is called sustained speed. I know from experience that, after 200m, the body asks you for speed, to accelerate. If you do, you are dead. The last fence will kill you. ” That is exactly what Warholm does, who goes out to eat the world, and it is no longer the Warholm of the semifinals, the one that ran so smoothly and smoothly that there seemed to be no fences in its hallway. "My chest hurt," said the Norwegian to explain a mark that was not expected and made him twist the gesture when he crossed the finish line quickly looked at the marker to his left. He had reached the first fence in 5.5s. The 200m passed in 21.4s, and there accelerated to make the curve of 300m in 12.2s (step in 33.6s). In the last 100m, sold out, he had to spend 13.8s.,

At four in the afternoon, hundreds of people wait lying in the grassy areas that surround the stadium, quiet under the sun that burns. They expect the foreman to give them the tickets for athletics and a reward. They are African, Kenyan, Ethiopian, Ugandan workers, who have been given the afternoon off at work to fill the stadium with passion and life. And when they do, they do it perfectly, just as professionally as they lay bricks or assemble chests for concrete and the skylights of skyscrapers, but they do not make it silent or submissive, but proud and radiant. Before them a great athletic afternoon takes place.

Doha's Khalifa stadium fills Africa in the stands, and on the track African athletes thank them for joy, shouts, chants and flags with victories and great marks. Some victory is not surprising, like that of Muktar Edris, the one who thwarted Mo Farah's perfect streak by prevailing in London in 2017, who leads the Ethiopian double in the 5,000m ahead of Selemon Barega, and does so with a great 12m mark 58.85s, the third best of the World Cups: with him he returns to the grounds below 13m that a World Cup did not step on since Eliud Kipchoge defeated El Guerruj and Bekele in Paris 2003. The great European hope, the Norwegian lad Jakob Ingebrigtsen, had to throw himself on a plate, more exhausted than anything, to finish the race, fifth (13m 2.93s).

Nor is the exhibition of Kenyan Beatrice Chepkoech at all, which has a pending account with a world final, and with the American Emma Coburn, and is widely charged. In London he made a mistake in a lap that he had to cut in a curve to jump the river but he realized on time. He reversed and jumped, and continued even though he had lost 50 meters, a disadvantage that grew when he tripped and fell to an obstacle. Despite everything he came back and fought to finish fourth. Coburn won, the same one that observes from afar in Doha as Chepkoech escapes fast and runs alone, with rivals distanced, and wins with splendor and even going down from nine minutes breaks the championship record (8m 57.84s), five seconds less than Coburn, to whom the best mark of his life is only worth being second.

A victory surprises and awakens so much joy in the stands and among the fans who understand beyond the flags as in the winner herself, the Ugandan Halimah Nakaayi, tiny and brave winner of the 800m (1m 58.04s), who dances happily a Chiganda (a typical dance from central Uganda) accompanied by his compatriot Winnie Nanyodo (fourth), and the flags of his countrymen in the seats are waving, and celebrates his victory, which means that the gold of the test is still African despite that the IAAF rules against hyperandrogenia (excessive testosterone production) that has knocked out the best, Semenya, from South Africa; Niyonsaba, from Burundi, and Wambui, from Kenya, the Rio podium. It is also the victory of the courage of an athlete who in the semifinal made her way with arms and teeth between athletes who took her head and kept her locked in her inner street. And he dances it on an atomic Nike latest model, white, with an air chamber on the sole and the carbon plate that acts as a spring, in sight. In the final, neither of the two favorites, the American Aje Wilson and Raevyn Rogers, knew how to fight it. They were second and third, respectively.

The revelation of the night was not African, but the bleachers didn't care, their occupants had already finished their careers. She was starred in an 18-year-old and 11-day Ukrainian named Yaroslava Mahuchikh, who did not win despite jumping 2.04m, a sub-world record 20, a magnificent brand that earned her only silver because gold was taken by the favorite, the Russian Mariya Lasitskene, the third world gold of a jumper that, as in London two years ago, will not have the right to listen to his hymn from the podium for the punishment that is not lifted to Russian athletics and its dopings. The silver of the adolescent Mahuchikh, a talent of 1m 81 and 55 kilos that has already been youth champion of the world and Europe called to dig with the old record of Stefka Kostadinova (2,09m), and the bronze and fourth place of the American Vashti Cunningham and also Ukrainian Yuliya Levchenko (both 2m, both 21 years old) announce that the high jump has started a new golden age to strongly replace the generation of Blanka Vlasic and Ruth Beitia. "It has surprised me with what maturity and strength Yaroslava has jumped," said Lasitskene, who sighed when the Ukrainian, after jumping 2.04m, resigned to continue over 2.06m, already giving her the gold. Lasitskene then asked for 2.08m, a height with which he could not. "I was really tired," said the Ukrainian braid in headband. "

And the night was going so well, the atmosphere had warmed so much and the excitement had grown so much that nobody in the stadium doubted that the final of the 400m hurdles would end up becoming the mother of all the finals. But when Warholm disappointed, Africa was no longer there to appreciate it.

Katir, silver in the 5,000 meters, completes a historic day for Spain