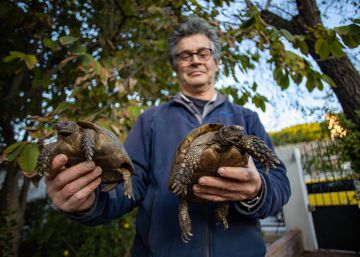 “To be illegal, look that these turtles have papers! ” The Cadiz environmentalist Juan Clavero pulls irony to explain how he has been accused of smuggling when trying to return 23 black turtles to their original habitat in Morocco. With the approval of this country and the Junta de Andalucía for your project, to the activist of Ecologists in Action he only needed to obtain a final permit to repatriate them, but he has run into a possible fine of 20,700 euros from the Tax Agency for an alleged serious administrative infraction that “is still pending claims,” according to the Government Subdelegation in Cádiz.

In the sun of a cold January afternoon, Clavero holds in his hands one of the reptiles that hibernates relaxed in the garden of his house in El Puerto de Santa María, oblivious to his role in an administrative mess that the ecologist still does not understand and in which they accuse him of not having documentation proving their origin. "We had everything organized to return them, it has been a lot of work to be told now that we are turtle dealers," Clavero complains, between disbelief and resignation. Even he has not been the only one expedited, Antonio Acosta, another member of the entity is claiming another 1,600 euros for participating in the same project and having two more specimens guarded in El Bosque.

Despite having been accused of smuggling and threatened with a large fine, activists now intended to "do well" with what was consumed as an illegality years ago, as Clavero recalls. Black turtles or Testudo graeca They are a North African species that, decades ago, the Spaniards introduced from Morocco to keep them as pets, usually without permits or controls. With the tightening of the laws for the introduction of non-native animals —cast by the Criminal Code with up to four years in prison— Ecologists in Action detected the increase in the abandonment of these reptiles in the natural environment of the province of Cádiz.

Although the black turtle was introduced in the southeast of the Iberian Peninsula since the Paleolithic, the policy of the Ministry of Agriculture, Livestock, Fisheries and Sustainable Development of the Junta de Andalucía is to confine or return to their habitat those reptiles that come from the North Africa for its genetic differences with the same species naturalized today - and declared endangered - in Almería, Murcia and Doñana (Huelva). Hence, Clavero and his family came up with 20 years ago to collect two specimens, male and female, to have them in captivity and return them in the future. The female, originally from Alhucemas, came from a fisherman who handed her over and the male from Ceuta arrived after the death of a professor from El Bosque. Both fathered the more than two dozen descendants who now await destiny at Clavero's house.

It was two years ago when Ecologists in Action He began to process the different permits to repatriate the 25 black turtles - the 23 that Clavero now guards and the two Acosta. "We raised it with the idea that, finally, they returned home," recalls the first of the environmentalists. Last February, the High Commission of Waters, Forests and Fight against Desertification of the Kingdom of Morocco informed him that he had no “objections to repatriation” and added that he would submit them to a period of legal quarantine “before releasing them in nature " In May, the Andalusian Ministry also valued "positively" the return, according to a letter to which EL PAÍS has had access. It only remained to obtain the CITES certificate, which authorizes the transfer of protected species from one country to another, and is issued by the Official Foreign Trade Inspection, Surveillance and Regulation Service (SOIVRE), under the former Ministry of Industry, Commerce and Tourism.

The Provincial Directorate of Commerce of Cádiz asked Clavero for the location of the turtles and some agents from the Civil Guard Seprona went to his home in July to make a voluntary demonstration act and take pictures of the specimens. In the document, to which EL PAÍS has had access, there is evidence of how the ecologist explained the origin by donation of reptiles and the lack of "any document" to prove their origin. The activist's surprise came when, at the end of December, he received a notification from the Tax Agency in which he was given the transfer of an administrative contraband offense file, with a fine of 20,700 euros. The penalty emanated from an alleged record of apprehension of the Seprona in which the absence of justifications of its origin refers.

“I think the error comes because it has been taken as a record of apprehension and not as a voluntary act. In addition, the documentation that shows that we had the approval of the counseling and the SOIVRE does not refer either, ”says Clavero. Despite the request of EL PAÍS, the Civil Guard of Cádiz has refused to pronounce. For its part, the Tax Agency has explained that they cannot refer to specific cases. Only the Subdelegation of the Government in Cádiz has clarified that the infraction file has a period of 15 days "so that it provides more information or allegations, which does not mean that it has already been sanctioned."

Acosta has already presented his allegations and the environmentalist of El Puerto is already close to doing the same, where he will justify all the good looks he had for his project. Meanwhile, the 23 turtles that hibernate hidden in the leaf litter in the garden of their chalet will have to wait a little longer to return to their home in Morocco. Of course, they will continue to do so under the custody of the environmentalist by mandate of the Tax Agency, which, although he has opened a file, paradoxically appoints him as a depository for reptiles. "All we want is for this to be archived and, above all, to finally give us permission to return them to their place," Clavero resigned.

Juan Clavero is a spokesman for Ecologists in Action in Cádiz and a historic activist who became director of the Sierra de Grazalema Natural Park. However, his name jumped into the arena after, in August 2017, he was set up in El Bosque to try to accuse him of drug trafficking on his return from a march in favor of free transit and use of the cattle routes, more and more surrounded by fences of private owners who refuse the public use of these trails. Finally, a judge ended up exempting him from any responsibility and four people were investigated as alleged responsible for a plot that has not yet been brought to trial.