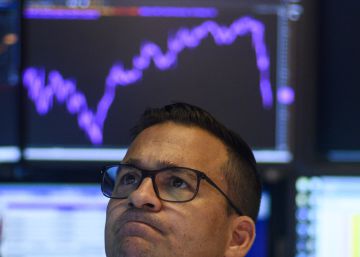 The differential between short and long-term interest rates narrows in the United States because of fear of further global slowdown. for the commercial war and tensions between China and the United States. That has made ballast on Wall Street, which has opened with steep drops this Wednesday. The uncertainty about the progress of the economy caused the Dow Jones index to be left close to 2% in the first stages of the session, also partly due to the fall of Disney after presenting its results. In the case of the S&P 500, the setback was 1.7% while the Nasdaq limited it to 1.5%. Investors try to redefine their strategies, seeking refuge in securities or assets that better withstand the storm that grows on the horizon.

In the European Stock Exchanges the morning had been calm and even with significant increases. However, the opening of Wall Street in red and the strength of the sovereign bond market, which acts as a refuge from turbulence, has deflated the large plazas. The Ibex 35 has gone public in red, and approaches annual minimums. Also the Eurostoxx, the German Dax and the Paris Stock Exchange were listed in red about an hour before the close of the markets, although still slightly.

The ten-year US Treasury bond rate stood at 1.61% on Wednesday, while the two-year bond was around 1.52%. In the case of the 30-year bond, it tried to remain at 2.13%, very close to the historical minimum, anticipating that the Federal Reserve will be forced to act. After an hour of trading after the opening in New York, the market tried to stabilize and the benchmarks moderated the losses.

Donald Trump keeps track of the march on Wall Street. Tweet about the progress of the markets frequently and conveniently. This Wednesday was no exception. Less than an hour after the session opened, he launched three messages to charge against another of his favorite goals. "Our problem is not China," he says, "our problem is the Federal Reserve that is too proud to admit its mistake."

“Three more Central Banks cut rates.” Our problem is not China – We are stronger than ever, money is pouring into the U.S. while China is losing companies by the thousands to other countries, and their currency is under siege – Our problem is a Federal Reserve that is too …..

The president of the United States presses again so that the type cut is “bigger” and “faster”. The Fed already lowered the price of money a quarter of a week ago, at a band between 2% and 2.25%. But the Republican expected more forceful action. In recent messages he also asks that the sale of debt assets be suspended, something that is already effective.

The president refers to the weakness of inflation, one of the arguments that Jerome Powell used to justify the first rate cut since the financial crisis. And he also comments that the margin in the types of short and long-term Treasury bonds is very large, which however does not correspond to the current situation in the debt market. "It's terrible to see so much incompetence," he laments.

Donald Trump insists he was "right" in criticizing the Fed. In the messages he cites that three central banks – Brazil, India and Thailand – cut rates by surprise. To conclude by saying that the US economy, despite everything, "will win." "It would have been easier if the Fed understood, which is not the case, that we compete against other countries that want to do well at our expense," he said.

The tenant of the White House also makes these comments a day after the four former presidents of the Federal Reserve who are still alive signed a joint letter defending the independence of the central bank. Yanet Yellen, Ben Bernanke, Alan Greenspan and Paul Volcker warn Donald Trump that these attacks "can undermine confidence" in the institution.

It can also be understood as a message to Jerome Powell so that he does not yield. The market, meanwhile, takes almost for granted that the Fed will again lower interest rates in September because the commercial tension will not dissipate soon and that will affect the economy. They also anticipate a third cut in December and even in January. Another thing is if it will go ahead to other central banks in the sales cycle.

The big question is whether market pressure will lead Trump to reduce confrontation rhetoric and opt for a truce with China, in view of the fact that the wind in the face of the US economy will grow if the tariff battle ends up affecting the expectations of companies and consumers. In that scenario, global ballast will become an internal economic problem.