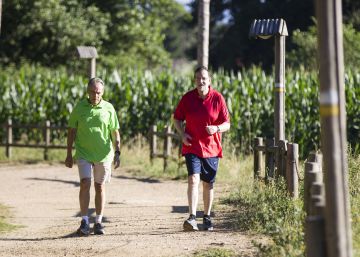 In the days of reflection, Mariano Rajoy used to dedicate the morning to sports. On the eve of the December 2015 elections, those elections that shook the political board and saw the end of bipartisanship, the PP candidate spent the morning with his dog rich, walking quickly through the gardens of La Moncloa. As a kind of love and I can’t, without running but almost. Rajoy’s rapid march, which caused so much chatter in social networks then and then rescued for a spot pre-campaign in 2016, it has been erected, however, in one of the best sports to combat cardiovascular risk. Researchers at the Hospital del Mar in Barcelona have shown that moderate and vigorous physical exercise, such as that practiced by the former president, modifies the DNA structures. Specifically, it acts on the function of a gene that is linked to the regulation of triglycerides. In large quantities, these fatty acids are close friends of cardiovascular ailments.

Well known are the benefits of physical exercise for health. It reduces the risk of cardiovascular diseases, prevents cancer and plays a crucial role in the fight against diabetes or obesity, the great epidemics of the 21st century. The scientific community has long taken it for granted, but continues to seek the mechanisms that explain these benefits. Therefore, a group of researchers from the Hospital del Mar Institute for Medical Research (IMIM) has focused on studying how genes respond to the practice of physical exercise. “We already knew that sport reduces the risk of diseases. We know that it impacts how the information of our genes is expressed. What we try to contribute are the mechanisms that explain why, ”synthesizes Dr. Roberto Elosua, of the IMIM Group of Cardiovascular Epidemiology and Genetics.

Elosua’s team focused on a specific epigenetic process, DNA methylation. The epigenome is the whole network of chemical compounds and proteins that stick to genes and, although they do not alter their sequence, they do cause chemical variations that affect their functions. Methylation is one of those epigenetic factors that occurs when some of those compounds act as a kind of switches, turning on or off the activity of genes.

Thus, the researchers took the physical activity data of 2,544 people from two population cohorts – the Catalan RECIGOR and the American Framinghan – and, based on blood samples from the volunteers, analyzed more than 400,000 methylation marks distributed in the DNA of Each of the individuals. “We found that light physical activity [como dar un paseo] It was not associated with any change of methylation. The only one that was related to changes was the moderate-vigorous activity ”, summarizes Alba Fernández Sanlés, one of the signatories of the study, which has published in the scientific journal Medicine and Sicence in Sports and Exercise.

Specifically, among the 400,000 methylation marks analyzed, scientists found two areas where physical exercise modified the performance of DNA. “One of them was in the DGAT1 gene, which regulates triglyceride metabolism. People who do more physical activity have less methylation. And having this little methylated gene is good because it makes triglyceride metabolism more activated, ”concludes Elosua. In high concentrations, this type of fatty acids increases the risk of developing cardiovascular ailments.

The other region of the DNA where the researchers found changes in methylation in relation to the level of physical activity was in an intergenic region – what is known as junk or dark DNA, which accounts for 98% of the genome and of which many are unknown functions—, an area that other studies have linked to factors linked to aging. According to IMIM researchers, this finding could explain why the usual practice of physical exercise is associated with greater longevity.

“There are previous experimental studies in which groups of people have been trained to see if there are changes before and after, but they were small samples of young people. Ours is an observational study of the general population, we do not intervene in the practice of physical activity. We only analyze methylation marks scattered throughout the DNA, if they are too much or too little methylated and we see if physical activity is related to this activity and what type of exercise is better, ”says Elosua. The researchers argue that Moderate activity (dancing or walking fast) or vigorous (going for a run or playing sports for at least 30 minutes) is the best for cardiovascular health. “You don’t have to be a Kilian Jornet to get beneficial health effects. With practicing the fast march, like Rajoy, you already get benefits ”, adds the doctor.

“This study explains, in part, how our body chemically adapts to exercise and that this can lead to benefits for a better fat metabolism and, eventually, a lower risk of cardiovascular disease,” says the director of the Epigenetics and Biology program of Cancer of the Bellvitge Biomedical Research Institute, Manel Esteller, who has also participated in the study. In previous studies, such as one of the Karolinska Institute of 2014 It was also established that long-term resistance training stably alters the epigenetic pattern in human skeletal muscle. In another from the University of Lund (Sweden), the researchers found that physical exercise changes the epigenetic pattern of genes that affect the storage of fat in the body.

“It is the study that more people use to see the relationship between physical exercise and DNA methylation. This research confirms how lifestyle allows modulating areas to be expressed or not. And that is through epigenetics,” explains Iñaki Martín, head of the Biomedical Epigenetics research group of the IDIBAPS of Barcelona. This researcher, oblivious to the study, argues that the finding of changes in an intergenic zone “can be very important.” “What remains to be known is what the target gene is related to that epigenetic change. And, on a functional level, what these changes do,” he adds.

Polar auroras, beyond our planet