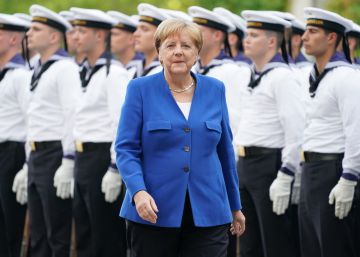 European GDP is has slowed again in the second quarter. Germany has recorded a decline in activity since March and in July car production has plummeted to levels close to the 2009 minimum. Therefore, it is highly likely that the first European economy is in recession.

As in 2008, all eyes are focused on Berlin so that Merkel approves a fiscal stimulus. Germany has a surplus in the state accounts, net public debt below 40% of GDP, the rates of all its newly issued negative public debt and an external surplus of 7% of GDP. Therefore, even a first-year economics student would recommend that the German government make an expansive fiscal policy to soften the effects of the recession on unemployment, as recommended by John Keynes in his General Theory.

But in 2008 the fall in GDP was much more intense, they also had a surplus in public accounts, the net public debt at 50% of GDP and an external surplus of 7% of GDP and the fiscal stimulus approved by Merkel was ridiculous compared to that of China or Obama's in the US.

Merkel came to power by denying the inheritance of his political father Helmut Kohl. In the year 2000 Germany suffered a crisis and the investment plans for the unification and the increase of the German contribution to the European budget, the euro and the structural and cohesion funds were the scapegoats. Merkel won the 2005 elections promising Germany first, same as Trump, and austerity in public accounts, to reverse the excesses of unification.

The strategy has been successful for both Germans and Merkel herself politically, matching Kohl and Adenauer in years as chancellor. Between 1980 and 2009 Germany was the fifth developed country where employment grew the least. An anemic employment growth in three decades, 70% lower than the average growth in developed countries. Since 2009, employment in Germany has grown by 11%. More than in the previous thirty years, similar to the growth of employment in the US or South Korea and well above Spain, where we still have employment levels below those before the crisis. The labor market is in full employment, wages grow and have reduced the inequality among young people generated by minijobs.

What is also very likely is that Merkel will again approve subsidies to save the automobile industry. And it will prioritize, as in 2008, that German companies close production plants outside to absorb excess production and protect German employment first. The problem now is that the crisis is structural, since German industry has come late to the electric mobility revolution that leads China.

The most likely scenario is that Merkel will repeat its 2008 economic policy. Will it be effective this time? We will see.